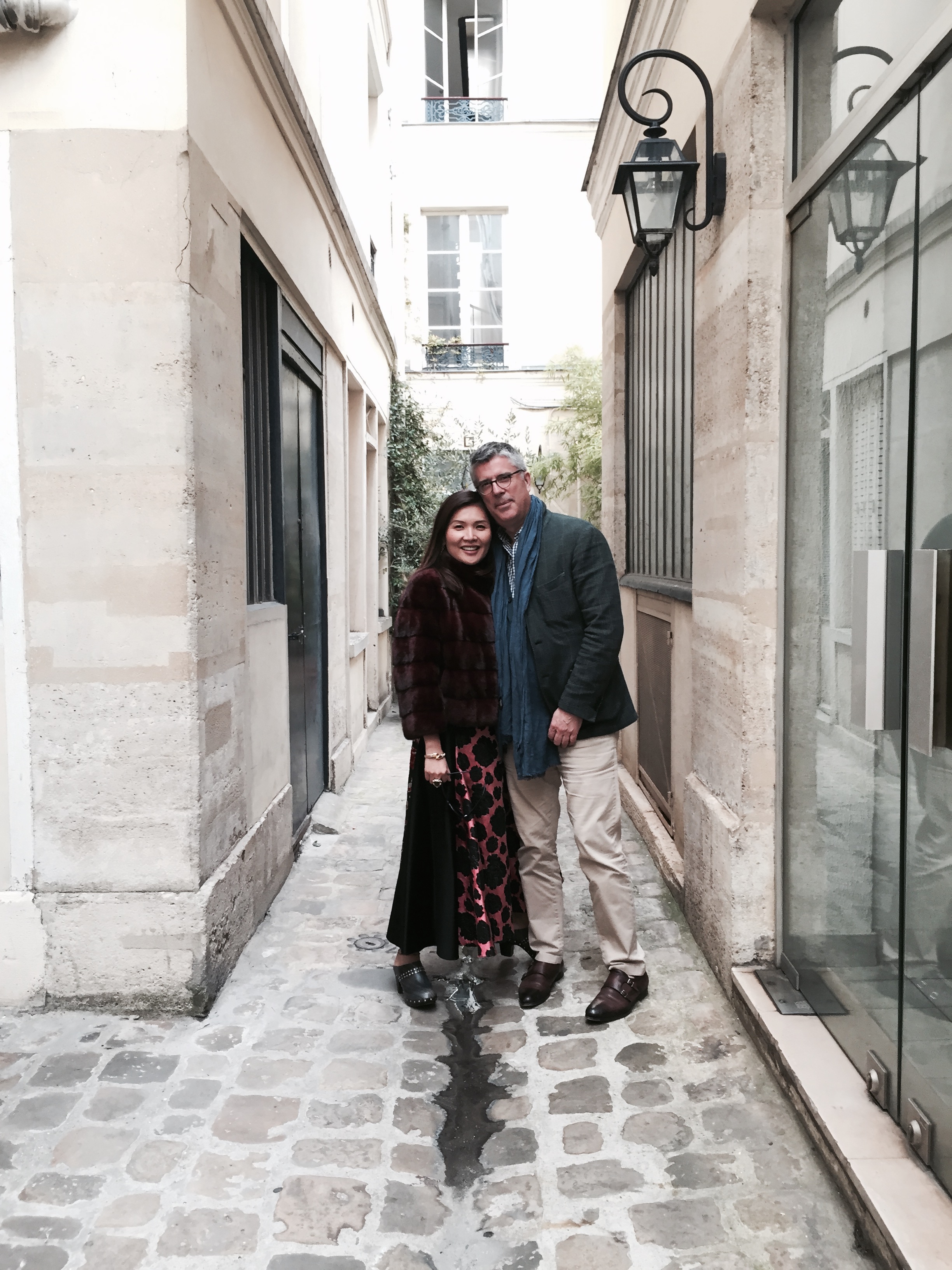 Mindy and Jean-Philippe Prugnaud of Mint Merchandising International, the European buying office for luxury retailers such as Saks Fifth Avenue and David Jones, are two of the most well-connected people in Paris. (Some designers refer to Mindy as the unofficial “mayor” of the city.) The duo met 20 years ago when both were working at Saks Fifth Avenue, and after 16 years of marriage, they now run Mint, which was originally founded by Jean-Philippe’s mother. But the Prugnauds aren’t solely involved in fashion; they do everything from recommending the hottest restaurants and shops in Paris to buyers visiting from overseas (how do you think Saks brought Parisian restaurant L’Avenue to its Fifth Avenue flagship?) to co-hosting and curating the guest list for Hillary Clinton‘s fundraiser at American financier James Cook’s chic Parisian residence. The latter was the talk of tout-Paris, as it was the first fundraiser for an American presidential candidate held abroad. The fashionable guest list, which included host Anna Wintour and Clinton’s aide Huma Abedin and guests like Alber Elbaz and his partner Alex Koo, was predominately orchestrated by Mindy, the event’s fashion liaison. We sat down with the power couple in their Paris headquarters on the Rue Saint-Honoré to find out more.

How did you end up in fashion?
Mindy: I went to Columbia University for a degree in industrial engineering. My parents are Taiwanese so they wanted me to have a proper education. So I worked on Wall Street, but it was not for me—I would spend my lunches at Century 21.

How did you start working at Saks?
Mindy: I sent them my résumé, because my brother heard that you could get a discount if you worked in the store. I wanted to be a salesperson on the third floor with the couture designers, but I think they were surprised to see Columbia and Merrill Lynch on my resume. They sent me through the executive training program, and I never left fashion.

How did you meet Jean-Philippe?
Mindy: I went through the buying program, and I was working on the third floor as an assistant buyer working with the European designers and on Giorgio Armani’s trunk show.
Jean-Philippe: I was an intern at the time, and we met when Giorgio Armani came to open the first shop-in-shop at Saks. Mr. Armani, Gabriella Forte, Mark Lee, and Alexander Vreeland were all there. It was a big day, so it was nice to meet at that juncture.
Mindy: We ended up getting married and have been married for 16 years.

When did you decide to work with the Prugnaud family business?
Mindy: I didn’t get directly involved in the business at first, because Jean-Philippe was still working with his mother.
Jean-Philippe: Mindy came in after about five or six years.
Mindy: Then we eventually expanded. At that time it was just the French buying office.
Jean-Philippe: But then Saks gave us our chance.
Mindy: So we became the buying office for Europe and expanded our offices to Milan and London.

Who else do you work with?
Mindy:  Saks Fifth Avenue U.S., Lord & Taylor, Hudson Bay, which are all under the same umbrella, and Saks Fifth Avenue Khazakhstan, David Jones in Australia, and Replay in Argentina and Chile. We are very selective, because you can’t work with more than one partner for a market. Of course, if you work for Saks then you can’t really work with Neiman Marcus or Nordstrom. David Jones is expanding.
Jean-Philippe: They were acquired a year and a half ago by this South African group called Woolworth, which has nothing to do with the American Woolworth, and as a group they became the second largest retail group in the Southern hemisphere. David Jones is a beautiful store and they’re investing in elevating the assortment, and they have a great team.

How big is your team?
Mindy: Here in Paris, we have about 14 permanent people. We have eight in Milan and two in London. A lot of people go to London for the shows, but not a lot of people go there for the market. So the total staff would be about 20 to 25, but during fashion week we hire a lot of temporary staff that work with the buying appointments. This season we hired four to five to just be in the market and attend the photoshoots for Saks.com.

How would you describe your work in a nutshell?
Mindy: We act as the eyes and ears in the local markets. The team comes only for one week, so we have to say, “This is the hottest place, the hottest restaurant, this is the hottest store.” Even if something isn’t right for the store, it is very inspirational. That’s why we handle everyone’s schedules.
Jean-Philippe: In addition to all of that glamorous stuff, there are orders to be placed, so we’re filling in a schedule with existing vendors, taking orders, and handling logistics.

How did you become involved with Hillary Clinton’s fundraiser?
Mindy: A friend of mine, Daniel Dozier, had been working on the Obama campaign. He was the former chief of staff for the American Embassy after Obama was elected. He asked if I’d want to be involved in Hillary’s campaign, and I said, “Of course. I would like to have a woman president and I believe in her policies.” I know that Hillary Clinton has a very strong stance on gun control, which is important to me, because we have two girls who are 12 and 14 and my dream is to send them to Columbia University. Everyone came to the event, from Wendi Murdoch to Alber Elbaz. It was open only to Americans, but if your partner is American, then you could attend. Alex Koo is actually Korean-American, and he has been Alber’s partner for the last 22 years, so he sponsored Alber. But my daughters were more excited about seeing Anna Wintour—they see Alber all of the time. We go on vacation together.

What’s next? Will you be involved in other political events going forward?
Mindy: I can’t really talk about it yet, but I want to do something with George Clooney. Co-hosting this event with Anna Wintour was great—she was a very big supporter of the Obama campaign, and she has been a strong supporter for Hillary Clinton as well. I love how Anna has vision. She always bets on the winning thing.
Jean-Philippe: She has amazing foresight. She gathers information just from very quick points of contact. I really think she has the most amazing eye and her talent is unmatchable.