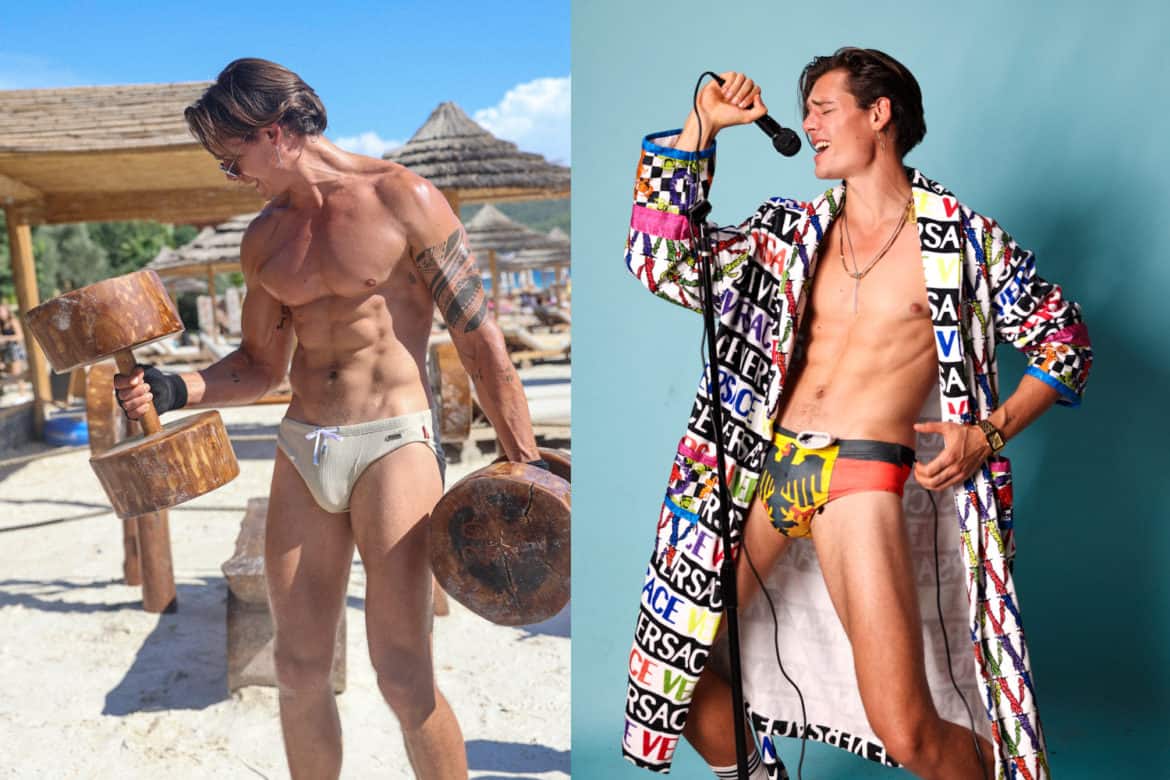 You might remember Mario Adrion from his American Idol appearance last year where he wore Speedos to audition for the show in front of Katy Perry, Luke Bryant, and Lionel Richie. It was a tongue-in-cheek appearance that brought out the former model’s comedic chops. The German-born and LA-based funny guy tells The Daily about his early days in fashion, why he knew comedy was his jam, and reveals a serious side about being sexually assaulted during his modeling days.

How did you first come into the modeling world?
I’m from a small town in the south of Germany of about 700 people. I was literally milking cows when I was younger. A model agent hit me up from seeing me in a Facebook group called Hot German Male Models. A wedding photographer that I shot with in Germany had posted my photo on there. A scout from New York City reached out to me and said I should be a model. I had never been to the United States and didn’t know anybody except for this guy. I went and stayed in Harlem at his apartment. Then I met some agencies and got signed in New York.

What were some of your most memorable gigs?
I did a Tommy Hilfiger campaign in Asia. I did some things for Gucci, Hudson Jeans, and in New York I worked a lot with Banana Republic and Bloomingdale’s. It was a wide spectrum. I also did a lot of underwear stuff!

You don’t say! Now you’re doing comedy. Were you funny when you were younger?
The one thing I always loved was making kids laugh in school. In Germany, I couldn’t let it out. I come from a family of lumberjacks. My uncle owns a Christmas tree business. They chop down trees. It was a masculine environment. It wasn’t the place where you think you could pursue comedy. Nobody does anything artistic in my hometown.

What made you think you could do it in the US?
I started modeling and thought it was my path but pretty soon I realized there was only one way to express yourself and that’s with your blue steel look. I wanted something else. I started a YouTube channel where I made vlogs about modeling in New York. Those vlogs became comedic. I went to LA and took an improv comedy class. I told the story of how I was circumcised at 19-years-old. I fell in love with the art form of stand-up comedy!

What’s funny about being circumcised at 19?
I thought at first I was going to be the cool kid in Germany because nobody there is circumcised. Now I move to LA and LA and every person in the US in circumcised so now I’m just the sheep. The circumstances for my circumcision were partly because of a girl I was dating who was Muslim. Her dad hinted at the fact that if I wanted to marry her that circumcision was preferred. 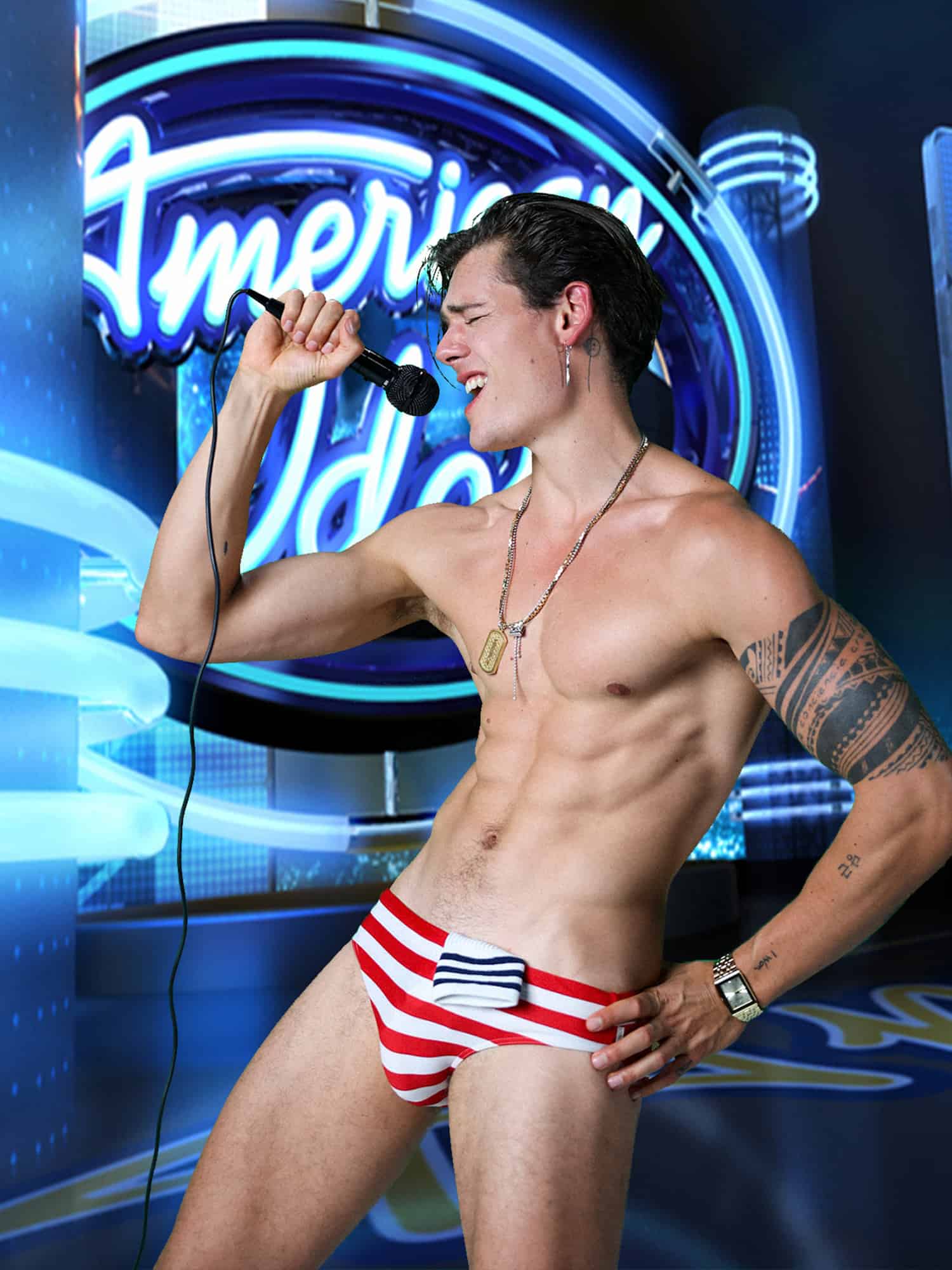 OK! You auditioned for American Idol last year and the clip has over 1 million views on YouTube. What made you decide to try out for the show?
I ran into this guy at a comedy open mic and he made jokes about being in a boy band in Germany, so I made a comedy song with him. He’s now a casting director for American Idol so he said I should try out. Even though it’s obvious I can’t sing, I thought it was a cool opportunity to get out of my comfort zone and have fun. It’s so much fun doing something where I’m not in control of the editing. I wanted to make Speedos great again! Sexiness is a part of me from all the modeling I’ve done. Let’s share that with America!

Were you nervous in front of Katy Perry and the other judges?
I was nervous before I walked out, but what I learned in modeling is to approach everything with making fun the priority. That’s how I approached every modeling casting and acting audition. Once I walked in there, I realized how ridiculous it is that Katy Perry is looking at me. I just had fun with it! I was afraid they were going to think I was a douche who was trying to show off his muscles. It is a bold move! They loved it.

What was the response? Did your Instagram following go up?
I thought [the gaining of] social media followers was going to be way bigger. It legitimized me as a comedian. I went on TV and did improv comedy—that’s how I saw it. The clip where I’m pec dancing with Katy Perry has 12 million views on YouTube. It took awhile for it to gain a lot of attention.

What’s the trick to bouncing your pecs?
Some things you’re just born with!

Do your peers in the comedy world resent you for being good looking and funny?
Yeah! It happens a lot. Something I’m battling with is getting the audience to like me. When I first go on stage, they see a guy who doesn’t look like the typical comedian so I have to do a better job than other people with being very self-deprecating. A lot of my material is about being model but when I say that it kills the audience. I have to win them over by making fun of myself. A lot of comedians tell me after that they didn’t want to like me! 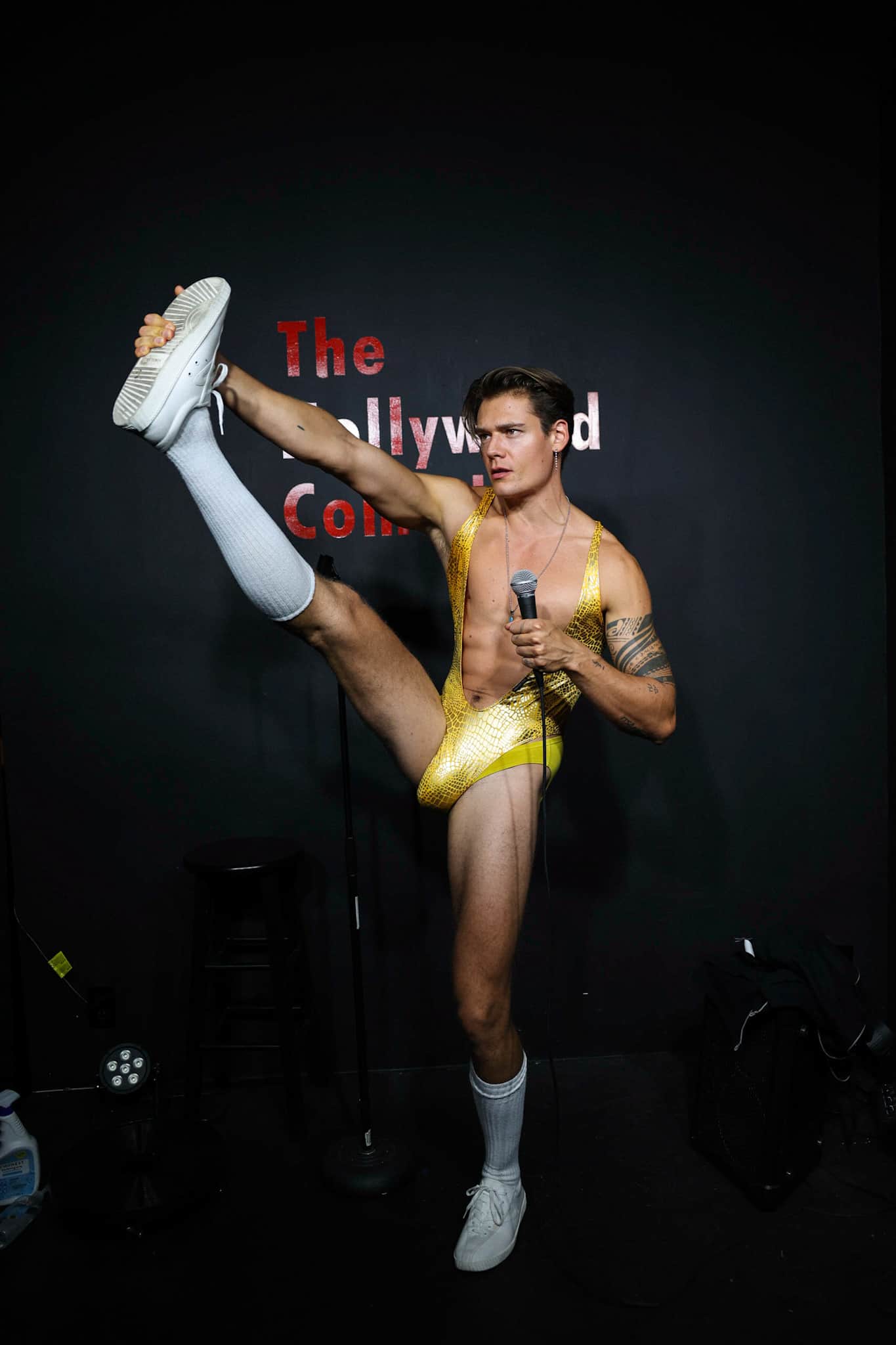 You have an OnlyFans account? What’s the content?
It’s basically all my modeling photos that are sexier. I’ve done nudes and I’ve had so many things removed from Instagram and YouTube. Platforms are being so sensitive now. I made an OnlyFans account so I can share all the content I’m still passionate about. I have incredible photos that I’m proud of, and I can share without the anxiety of things being taken down.

Do you chat with people?
The community is a mix of people who want to see explicit content. There’s a huge stigma around OnlyFans. They are doing a lot to make it a more universal platform to connect with your audience. I have opened up about being sexual assaulted.

When did you first come out about being sexual assaulted during your fashion career?
It happened when I was 21 or 22 and I never really talked to anybody about it until I was 26. I brought it up to my best friend Travis Bryant in a car. He told me about his experiences as a model. Then I told the story of my sexual assault and when I said it out loud, I started crying. I didn’t know I had feelings around it. I had never talked about it. When I realized how many emotions there were, I felt like it was almost my responsibility to talk about this because there’s a lot people who could benefit from the message. Even if one younger model hears the message that if they ever come across a potential abuser, they can say no. I have trauma from the experience. I feel like because I’m a man, I couldn’t have any emotions about it. I made a spontaneous video on YouTube to share my story.

Have you heard from people and what’s that responsibility like?
It was overwhelming. So many people commented and people sent me messages. One person sent me a letter and opened up about abuse she experienced from a friend of her dad’s. She has never told anybody except me. It feels good to open the conversation but in some instances I was overwhelmed because I don’t know how to respond to this. It was tough.

On a lighter note…I read that you said you are very vanilla. What’s a typical Saturday night like for you?
I don’t really go out or party. I did when I was in New York, to network. I love connecting with people and going to the movies. I love waking up early. I wake up when everything is quiet. I do my morning yoga routine and mediate before bed. I’m not a crazy party animal. I’m very chill.

How do you stay in such good shape?
I do yoga every morning. I eat lots of carrots. That’s my spirit vegetable. I love them. I always had carrots with me when I was modeling in New York. I’m very disciplined with my diet. I don’t really eat sweets. Once a week I’ll have a desert like bread pudding. 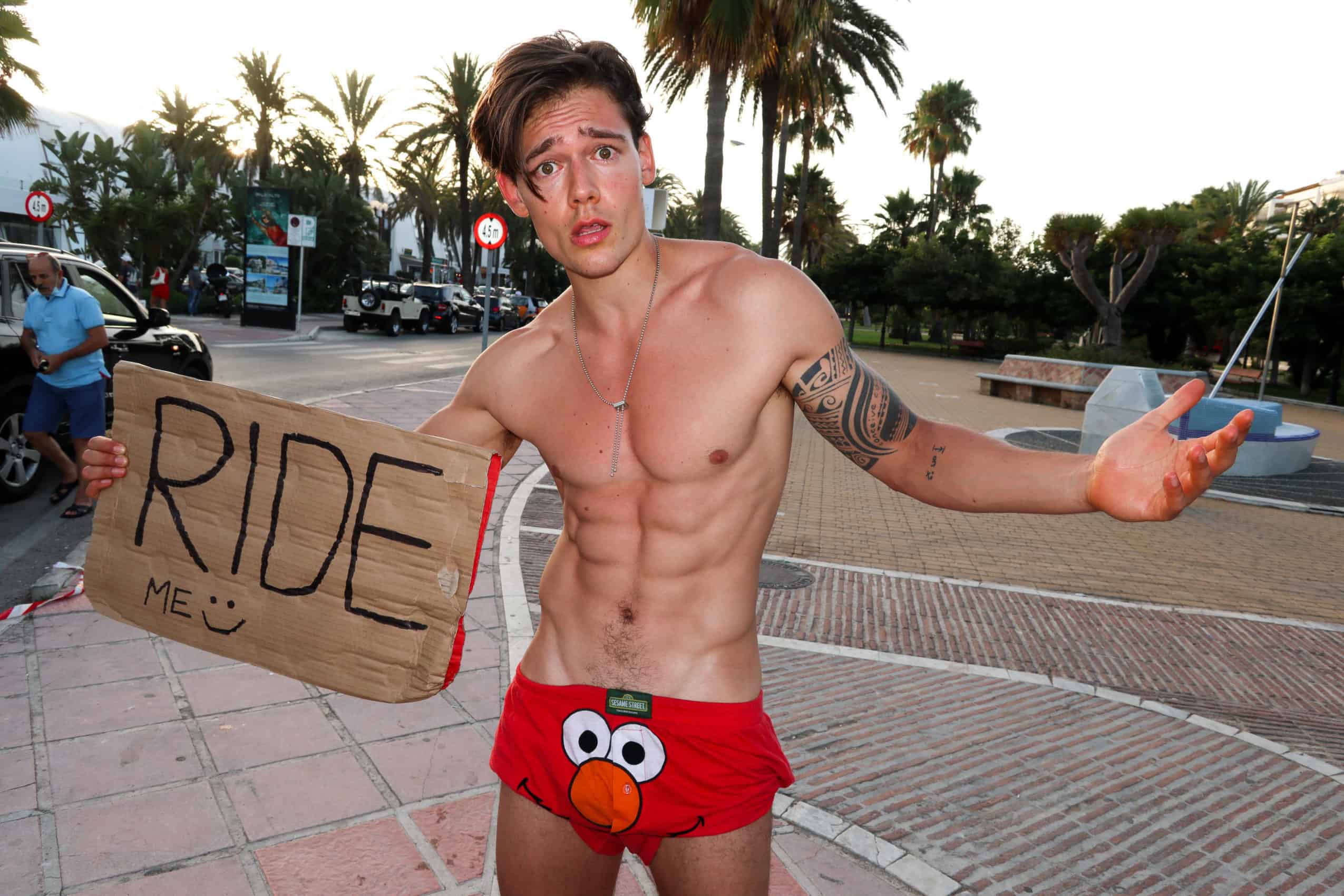 What celebrity do people tell you that you look like?
Some people say a young Leo (DiCaprio). I also get Johnny Depp.

I see a lot of Brad Pitt in you!
People say that. I made some TikTok videos recently and the comments said I look like a young Derek from Euphoria.

Those are pretty good people to be compared to!
I like it! I also get Josh Hartnett.

Do you feel you’re in charge of your journey now with all these digital platforms to create content?
I’m very grateful for my experiences as a model: I travelled all over the world and I met some of my best friends through modeling. But what I didn’t like about it was that somebody else was always in control. I always had to please a casting director. With social media, I have to please not one person, but a million people, but I’m in control of my destiny. With social media, I can share my message and that’s so rewarding.

Mario will be appearing at Laugh Factory in Los Angeles on April 6th and check out his YouTube page HERE.

Hailey Grice Explores What It Means to be a Model, Content Creator, and Influencer Today