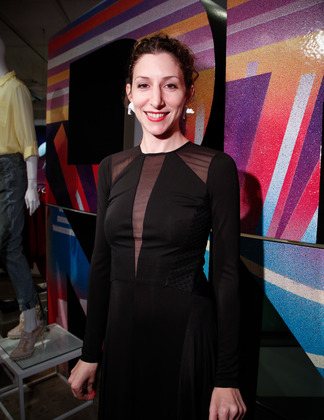 Looking for a book to devour this summer? We’d like to rec Iris Has Free Time by Iris Smyles? The author and former New Yorker intern was at DKNY’s Madison Avenue store this week to sign copies and spent a little free time to tell us her tale.

How did you come up with the title of your book?
I had started a blog years ago, which I never really did anything with and I was unable to think of a title. So I just called it Iris Has Free Time because I had free time when I started it! Then that disappeared, but I always liked the title, so when I was writing this book, it seemed very appropriate. Part of the book is about youth, and the illusion that you have free time and that you are not on a budget. When you start to get older though you begin to realize, oh my God, I only have this amount and I have been wasting this time, have I been wasting it, have I been spending it accordingly. The whole idea about spending time or killing time is something unique to youth.

Is this book a metafiction for your own experiences?
Much of it is drawn from my own life, except that I also embellished and added and changed. It is not meant to tell my own story, but to use some of my own story to tell a larger story about youth and growing up or not growing up. I interned at The New Yorker like the main character, Iris. The parts I embellished the most are the parts that sound the most realistic and the things that sound most preposterous really happened! You would think “she’s exaggerating. No one would pass out in The New Yorker, no one would bring Colt 45 in there.” But that’s what I did! One of the reasons I wanted to write it in the present tense is so that the character exists permanently. As opposed to a memoir where something happened, and now it’s gone.

Do you have much free time nowadays?
I actually get really nervous thinking about relaxing as I approach the weekends! So, I make to-do lists to maximize my relaxing. Otherwise, I get this sense of free-fall! I like to make a list, hour by hour; I normally ignore the list but at least I know that I am working within some structure.

How did you get Diane Keaton to write a bit about your book?
I slept with her [laughs]. No, that’s not true. We sent the book to her because I thought she’d like it; she’s an idol of mine. And she did like it! That’s really been the story behind everything; that’s even the story behind this party. It is all about wanting something, putting forward the work, and going for it. Hopefully more things work that way…

Speaking of this bash: How’d you pair up with DKNY?
I spoke to a friend of mine about doing something at DKNY, he spoke with his friend…who spoke with a friend of his…who spoke with a friend of his…Finally, we made our way around to someone actually at the company. Then the relationship started. The first time I went into the office they said that they were willing to do this; they mentioned L.A. and London. I actually thought they were kidding, so I didn’t follow up. I feel very lucky! The irony is that the book is kind of about failing, and yet that’s what brought me into this context.