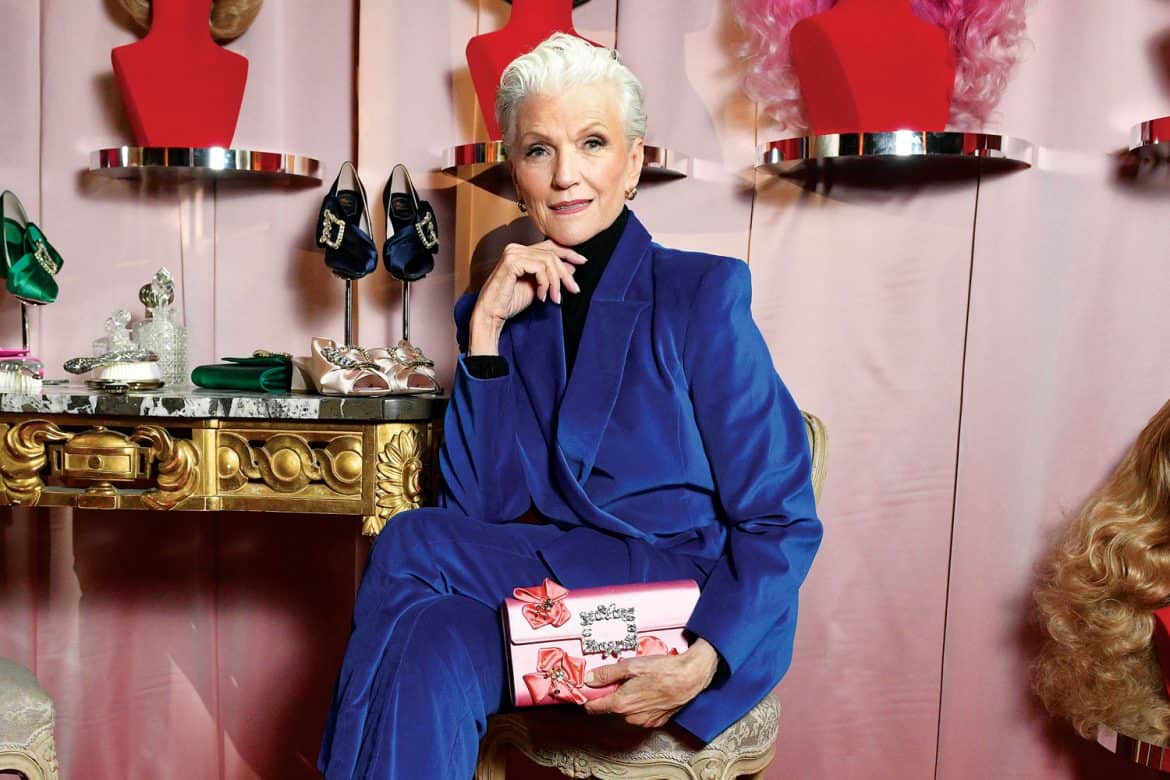 At age 71, Maye Musk was a little late to attain “It Girl” status, but she doesn’t care. The IMG model and
mother of Elon has taken her lifetime of ups and downs to the page with the release of her recent advice book,
A Woman Makes a Plan. The Daily took this ultra-confident optimist to lunch at Sant Ambroeus to dish
about how she survived an abusive marriage and why she thinks people are clamoring to hear her tale. 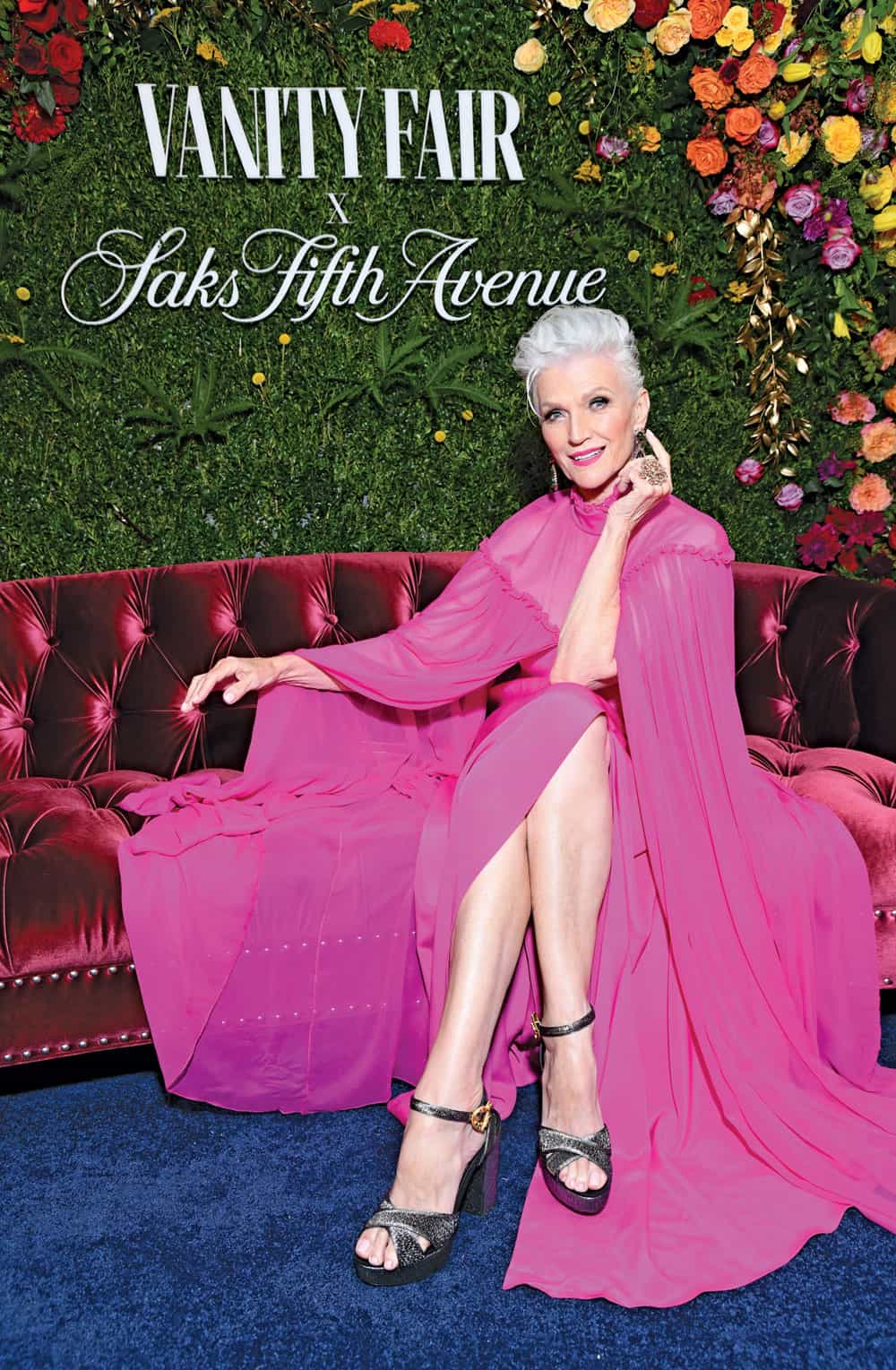 Was writing a book like this always on your agenda?
No. I did write a book about nutrition and fitness in 1996 because a publisher asked me to, and I believe it’s an honor when a publisher asks you to write a book. I did some appearances on self-esteem. That’s why Kellogg’s put me on a cereal box. I was the first dietitian to be on a cereal box. Dietitian was my main job, and I modeled part-time. I never told people I was a model. Sometimes they would say, “I saw you in a Sears catalog,” or “I saw you on a billboard,” but I never told them. It takes the seriousness away from counseling patients. That book sold, and I moved to the States from Canada.

So what led to penning your second book, more than two decades later?
Everywhere I would go with my publicist, and on Instagram and Twitter, people would say, “Oh, my God, Maye, you have such great advice! You should write a book!” I said, “Look, I’m quite happy with how things are.” Then she said, “I just booked this appointment with this literary agent. You’re going to meet with her.” Then, we had appointments with six publishers in a week. We met them all, and got an offer we couldn’t refuse within two days.

Did you have a manuscript?
No. I was just talking. They wanted my stories from being young to where I am now, so I recorded my stories, which got transcribed. I said to my editor at Viking, “You should take out some of those stories, they’re pretty rough and I’m not a negative person. I don’t like negative situations. I never talk like that. I’m just a happy person who has a blessed life.” She said, “No. They stay in.” I said, “No, I don’t want people to feel sad for me and think I had a miserable life.” She said, “You had a pretty miserable life.”

But you never looked at it that way.
At the time I was in hell. I was in a lot of hellish situations. Then we told the kids about [my book], before we even did the manuscript. They said, “Make sure it’s about your struggles.” I said, “Okay, let’s call it Struggles and Survival,” but [my children] didn’t like that title because it’s not positive enough. I put my struggles in, I was uncomfortable with that, but now they’re in. People are relating to when you’re in a bad situation and need to make a plan. That’s where [the title] A Woman Makes a Plan comes from. The stories I’m hearing on DMs on Instagram, there’s a lot of people struggling—they’re in a bad relationship, it’s not going well at work, they’re in the middle of a lawsuit or custody battle. Workwise or family-wise, they’re unhappy; or they’re really scared of aging. That’s big. This [book] gives them confidence again. I think aging is great! Look at me! 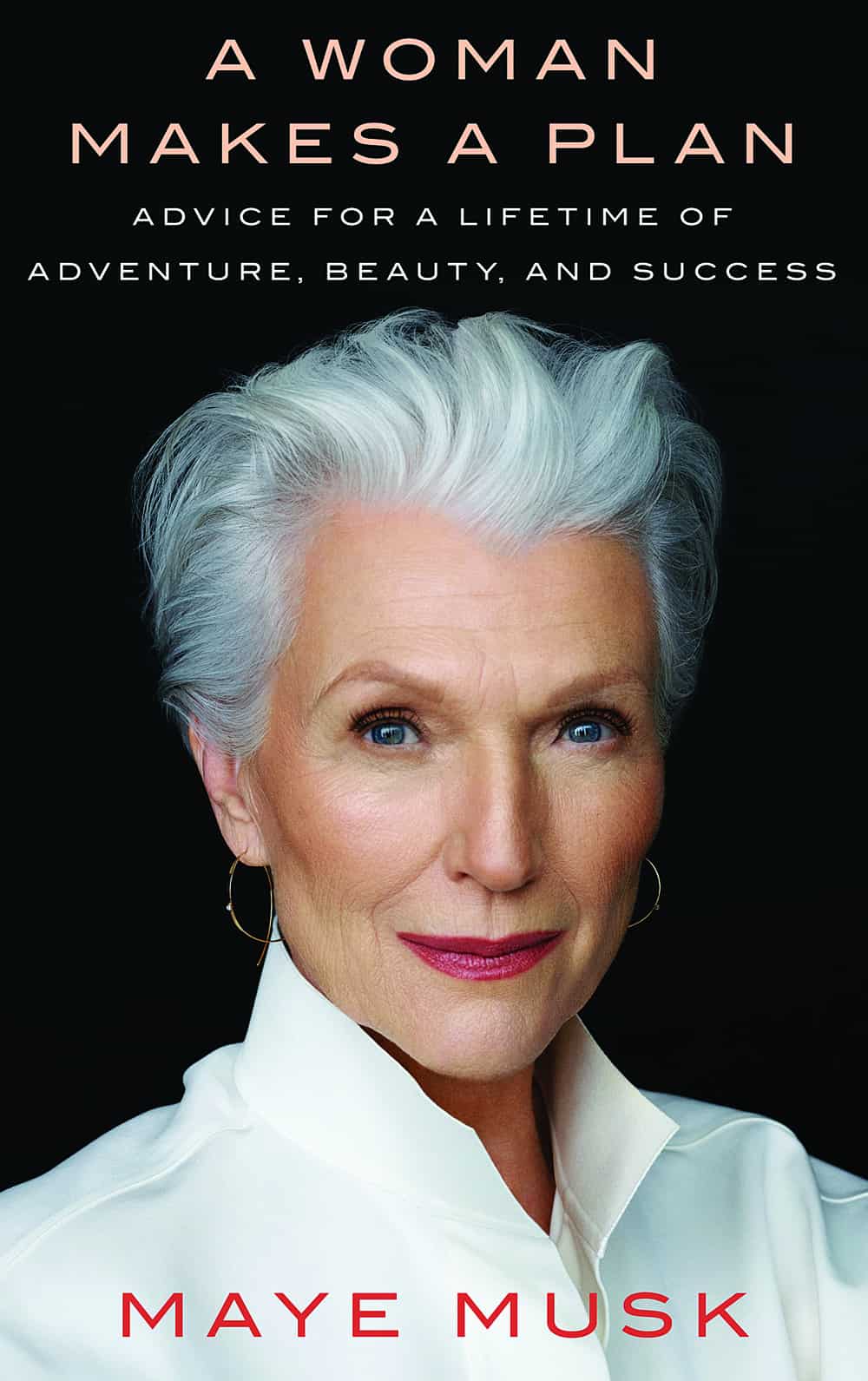 What was the hardest thing to write about?
An abusive marriage. It was nine years of my life, and then 11 years of court cases where [ex-husband Errol Musk] sued me for custody of the kids. My mom would always go with me to court; I couldn’t afford a lawyer. Of course, I would always win the cases, because I’m not abusing my children and I’m not starving them. But they wouldn’t stop; a week later, I would get another subpoena. That was really hard. Eventually when I could afford it, I got a lawyer who said, “We’ll get you custody.” I would say, “I don’t want custody. I want you to stop him from suing me.” I went though many arrogant lawyers who wouldn’t even ask. “Oh, you got custody, you won,” they’d say, I said, “I didn’t win because you didn’t even ask the judge to stop him suing me.” He says, “Oh, he’ll never sue you again. He lost.” A week later, I’d have another subpoena. It was 11 years of that.

You were clearly dealt a lot of blows, yet kept a positive attitude.
Well, I had to survive. I have three great kids. We were healthy. It’s a big advantage if you’re healthy and educated.

What did your kids think of the finished book?
Kimbal thought it was great. He thinks it’s going to change people’s lives. Tosca says, “I’m shooting a movie. I don’t have time yet to read it, but I know it’s going to be good.” Elon just said, “Well, as long as there’s your struggles in it, I’m fine with it, and Kimbal says it’s okay.” He launched a rocket last night and he’s in China today. I think Elon’s friends are loving it, so he’s going to enjoy it.

Do you often get asked if you drive a Tesla?
Yeah, a lot. Of course I drive a Tesla! Now, they’re asking if I’m going to drive the Cybertruck. Probably not.

What aspects of your life did you love writing about most?
I love the nutrition and health parts. Of course, that doesn’t sell as well as sadness, unfortunately. People really love my animal stories about my adventures in the Kalahari Desert, and my parents’ adventures—to me, that was just normal, but it wasn’t really normal. I like being an entrepreneur, having my own business, and sharing with people who want to start their own business. The family part, too—I was fortunate with my kids and my 11 grandkids. I feel lucky. I think people find it funny that I’ve had bad luck in dating. Every time I do a shoot with other models, besides nutrition, they always ask about dating.

We love that you drink Diet Coke, as you mention in your book.
I love my Diet Coke. 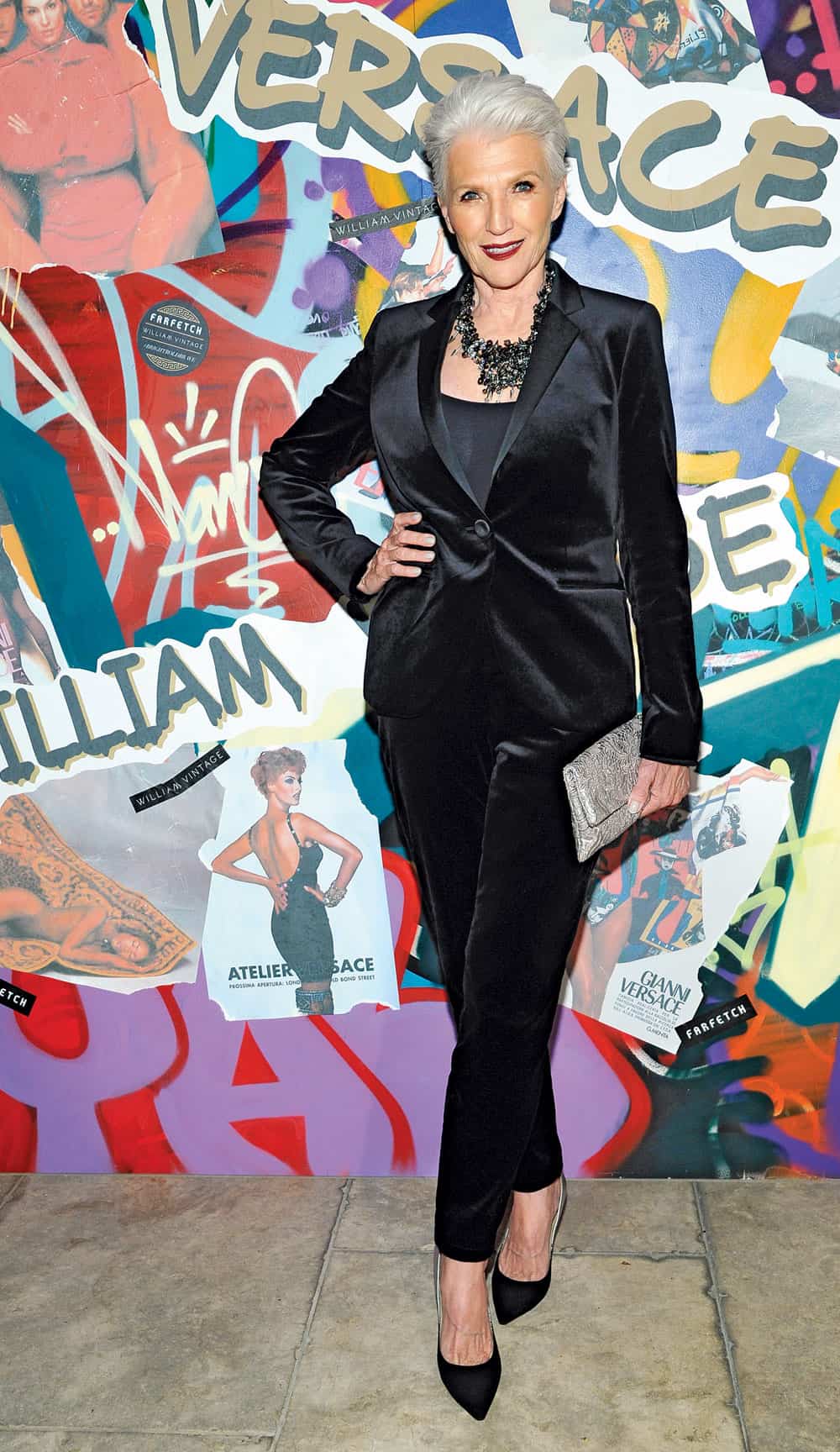 A lot of dietitians aren’t fans!
Not dietitians…a lot of “Internet nutritionists” would be anti-Diet Coke, because they don’t read the research, which says that if you drink 200 Diet Cokes a day, it could be harmful. Anything in excess is a problem. If you drink too much water, you will die; if you eat fish three times a day, you could get mercury poisoning. I had the hardest time getting people to eat fish three times a week. I eat bread; people are surprised. I follow science, and I’m careful with my food habits—most of the time.

Why do you think people are so interested in hearing a 71-year-old’s story?
I think they’re scared of aging. Aging is great. I really love it. Men are not so afraid of aging; they’re not scared of losing their jobs because they’re aging. Women are scared about that. That’s got to stop. Men have to appreciate women who are intelligent and hard-working. Women have to help one another, which is a good start, but men have to help women. You shouldn’t be promoting someone because he’s a man if there’s a competent woman.

When you walked Christian Siriano’s show last season, you told us that designers should hire more older women.
They should! People are loving it. An aspiring older model asked me today if it’s slower for the age group. It goes in waves. On the beauty front, it never slows down. That’s major. The beauty industry has got it a bit more down pat than the fashion industry. When modeling slows down, I get busy with my dietitian work, and I do a lot of speaking engagements worldwide. 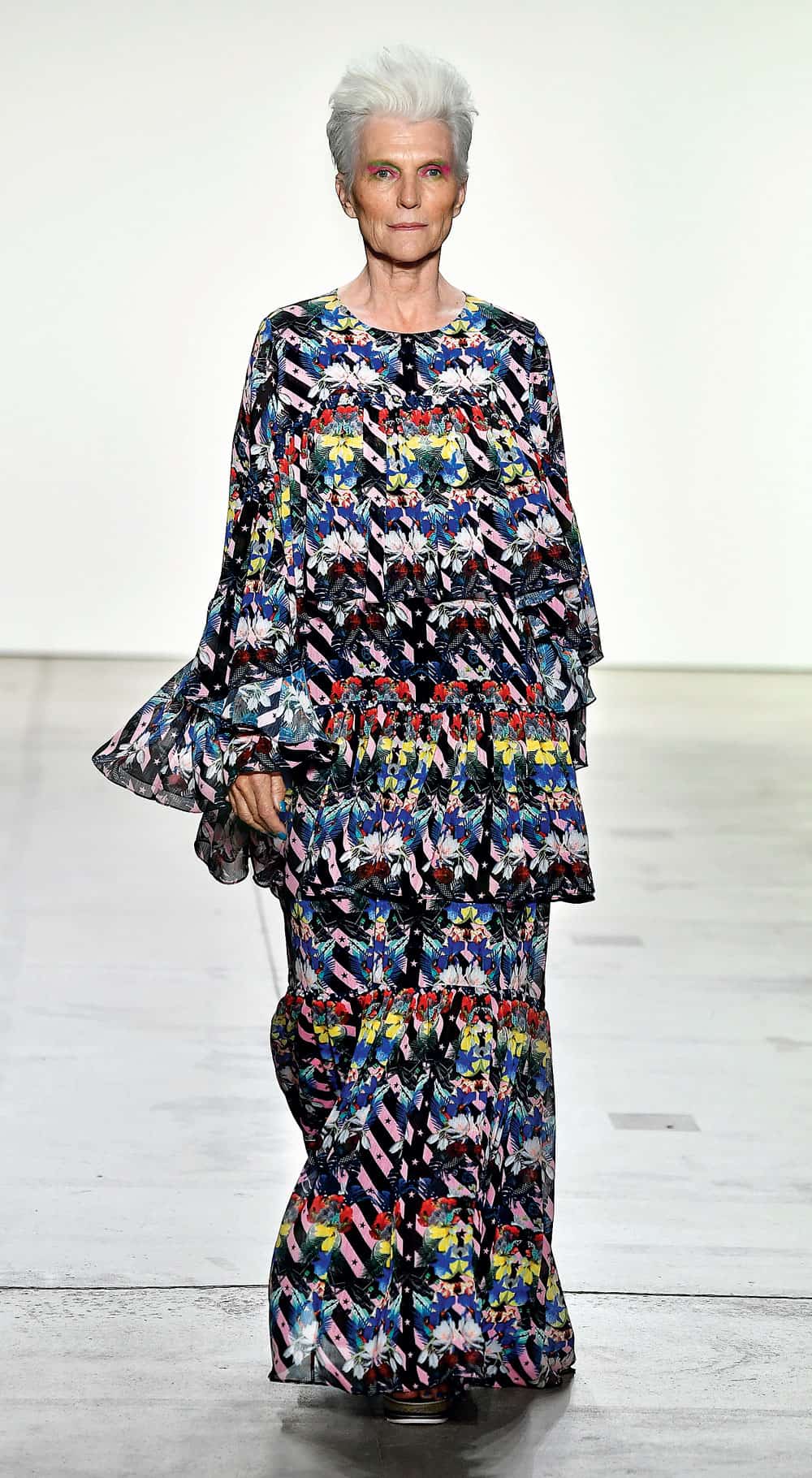 Is that what brought you to China recently?
They wanted me to talk about older women having their own businesses, being successful and relevant, looking stylish, and sharing wisdom. We did a press junket, and had dinner with 2,000 women from ages of 18 to 25, in the most magnificently decorated ballroom. I’m at the point where my story is so relevant to different women culturally. Things are changing for women. I’m excited because I’m going to countries like South Africa and Germany, where women don’t have opportunities like in America. It’s very different. These women are inspired by hearing about me, my situation, and tough things I was facing. That’s the goal for 2020, to tell my story so culturally it can disrupt how women are thinking in other countries; 50 percent of CEOs should be women and 50 percent of presidents should be women and we could have a kinder world.

How did he find you?
Who knows!