Matt Bomer on His New Eyewear Collection, The Boys In The Band, and Why He Loves Kamala Harris 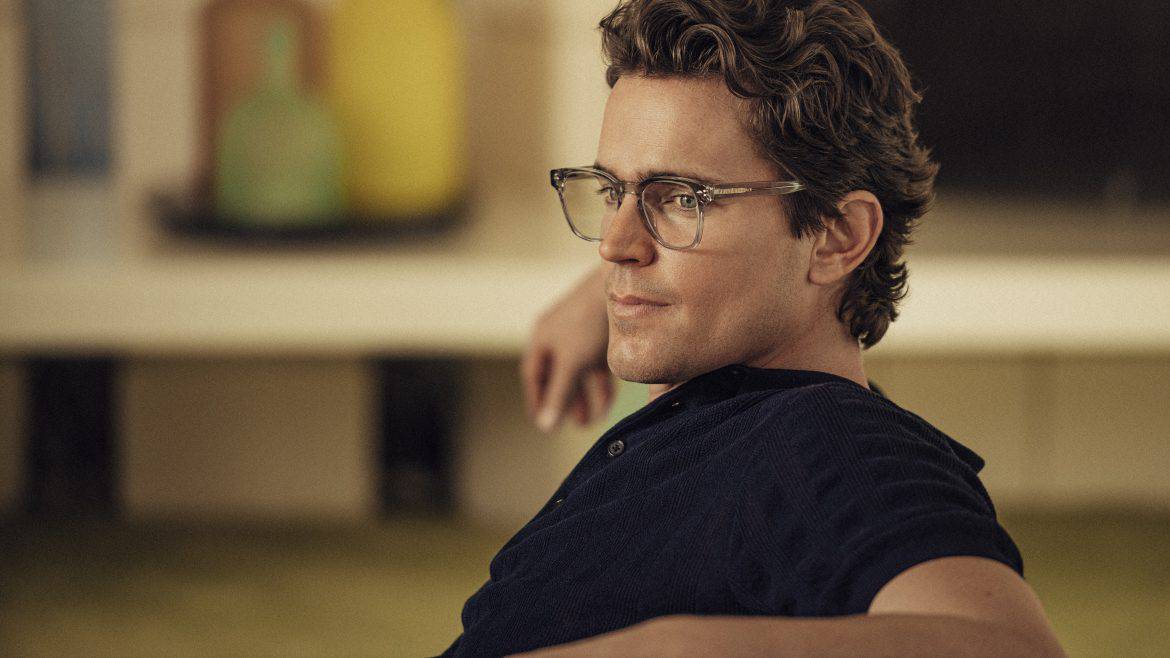 Celebrity eyewear brand Privé Revaux’s first joint capsule collection is out today with Matt Bomer and Ashley Benson joining forces to create a gender neutral line. The line features five classic looks inspired by the most recognizable frames in cinematic history. We recently caught up with Bomer to find out how it all came together, what he’s been up to this year, and get the scoop on his upcoming Netflix film, Boys In The Band.

Let’s talk about the line. How did this come to you?
The brand approached me along with Ashley [Benson], who I’m a huge fan of. I’ve loved her sense of style. I didn’t know a lot about Privé at the time, but when I checked them out online, I loved what they offered the customer, which was of the moment styles and quality without sacrificing style or quality. It was modern and vintage feels at an affordable price that didn’t also fall apart when you put them on your face. They were also into my creative input, which was something that was interesting to me. It ended up being a fun collaboration. When I was in New York in my twenties, working two jobs to pay my incredibly high rent, I still wanted those high quality frames without having to spend all the money I had to get them. Now you can go to a place like Privé and get the same style and quality for a fraction of the price. The frames are really versatile.

Did you know Ashley beforehand?
I was a fan of hers. I loved her in Spring Breakers and Her Smell and a lot of the film work she’s done. I was a fan but I didn’t know her personally. We met over the course of the collaboration and I just adore her. I think she is as cool as a person as you are likely to meet in this industry. She has an effortless glamour about her and an impeccable sense of style. 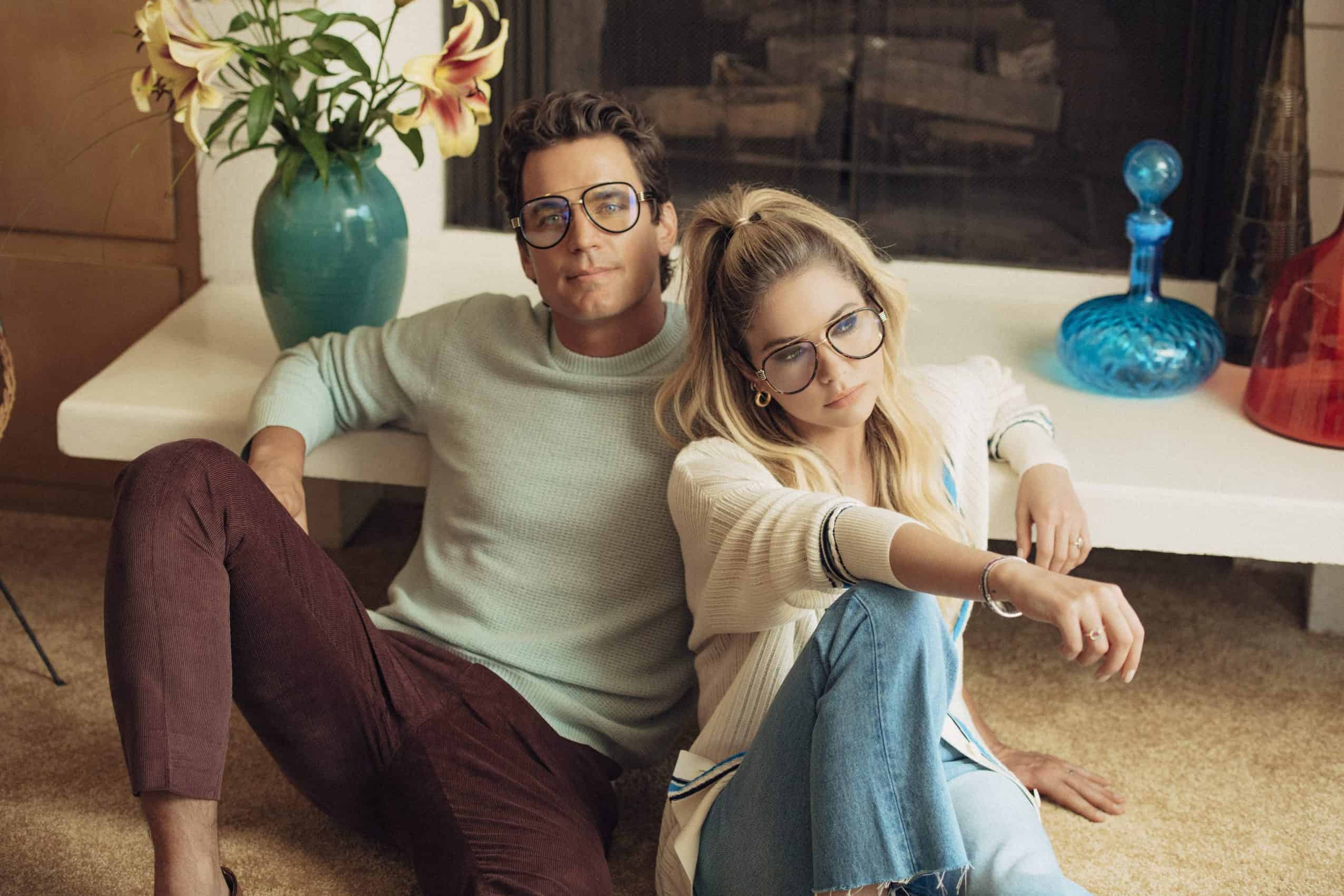 How long has this been in the making for?
Initially it was going to be a Pride capsule launch but obviously the world changed in March and plans changed. We met in December or January for an initial meeting and we started to discuss style types and inspirations and what we wanted the line to look like and then everything changed so now it’s going to be released on Aug. 20 in time for fall.

The collection was inspired by iconic eyewear in film history. Tell me some of the films you referenced.
A lot of them were iconic images that I already had in my mind, like the Conrad is similar to the type that Paul Newman would always wear. The Cliffs were inspired by Once Upon A Time in Hollywood. The Joels were inspired by Tom Cruise in the ‘80s, and maybe there’s a little bit of Grace Jones thrown there as well. The Kents are my go-to style of frames that I’ve worn since I started wearing glasses in my teams. A simple Clark Kent inspired frame. The Macys are inspired by my mom and the frames she used to wear in the ‘80s. The inspiration runs the gamut!

Is your mom’s name Macy?
Her middle name is Macy. 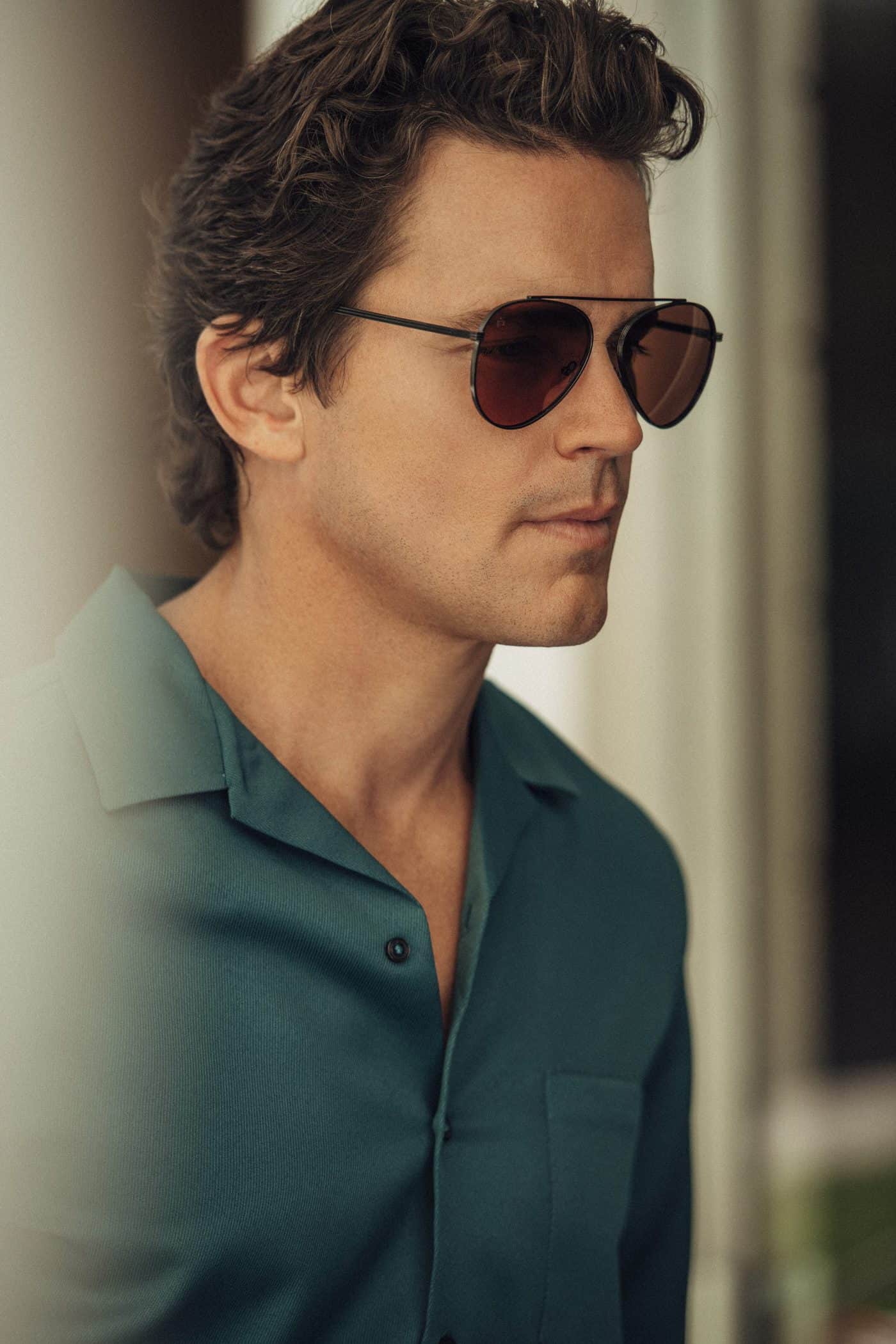 That’s very sweet. What do you look for when you go shopping?
Honestly everything has changed in the past 10 years. I used to go into stores and browse, but so much that happens with me is interaction with other people. I’m the kind of person that if you’re wearing something that is amazing, I will approach you and ask you where you got it and who makes it and all that. That’s where my inspiration comes. I find on photoshoots, the photographer assistants have the coolest styles going on in their clothes and their frames, talking to people on the streets, now on social media, they know I’m an easy target and I get hit up with all kinds of ads when I’m on Instagram and I see styles that I like there without even going into a store. I’ll try it directly through social media.

Let’s talk about fashion a bit. We know you’re a fan of Todd Snyder. Tell us about that relationship and who else  you love wearing.
I’ve been a fan of Todd’s since he was at the Ralph Lauren Black Label and J.Crew. I was a fan of his work there. He revamped J.Crew’s men’s line at the time he was there. I met him at the CFDA Awards when he started his namesake label and I introduced myself and we hit it off. I love the way he’s grown creatively, I love who he is as a person, I love what the company is, I love how inclusive the company is. Sometimes you find designers that grow and evolve with you and I feel he’s one of those people for me. There are so many amazing designers out there. I have certain designers out there who I have always relied upon for formal wear like Armani and Tom Ford. Names like that that we all know and love. For me, so much of fashion for the past few months has been about athleisure or comfort wear. I love Outdoor Voices if I’m just going to be lounging around. I love comfortable hoodies or t-shirts. It’s been simpler fare in the past six months. 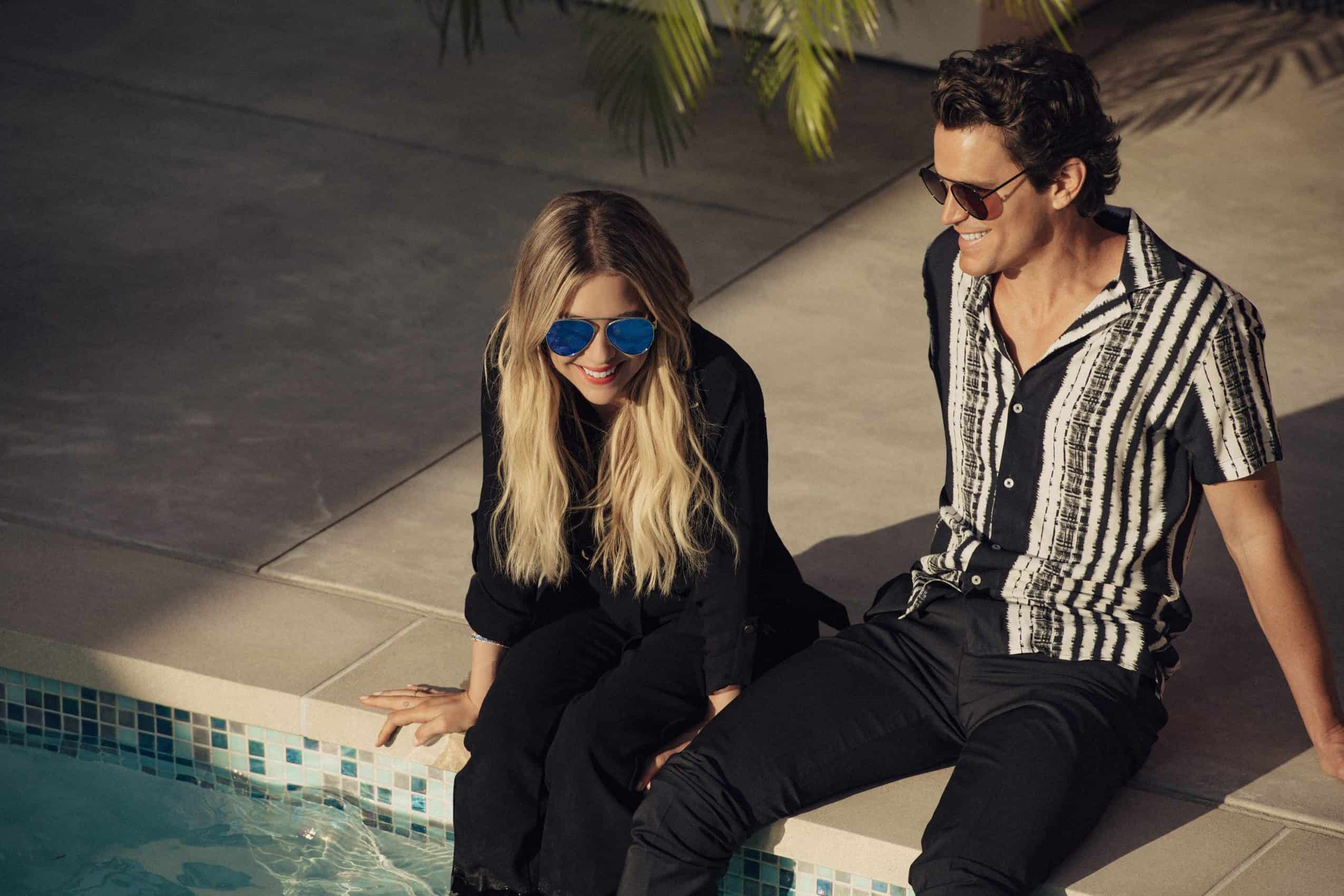 Love him. Why did you want to work with him?
I loved his eye. I’ve known him for a couple of years peripherally in the business. There was a time that he designed some jean jackets with Robbie Rogers that I loved. They got me one and I still wear it all the time. We met and he showed me some looks that he pulled and I thought, not only were they representative of who I wanted to be, but they also encouraged me to step out of my comfort zone a little bit. He’s not afraid of color or patterns. He also works with a lot of designers who I hadn’t worked with before. He’s really talented and has a very specific eye for each of the people he works with.

Do you have any indication of when you are going back to work and on set?
If there’s a positive note in all of this, it’s been a great time to be developing new projects. I’ve built up a pretty full development portfolio for when people are actually on sets again regularly. I have Boys in the Band coming out on Netflix later this year. I’m really looking forward to that. It tends to be a day to day situation of what’s going and what’s not, but I believe a movie I signed on to is going to start in the late fall. That’s always subject to change.

What was it like reuniting with the Broadway cast of Boys in the Band for the movie?
It was amazing. We shot it on a soundstage in L.A. and we did some of the exteriors in L.A. and New York. We had such a phenomenal experience on stage, and I didn’t know what it was going to be like in a different medium to be honest with you. I feel like so much of the work, the camaraderie, and ensemble that we built on stage together in our initial run fed the work in the film. It’s obviously a different medium. Inherently it’s a much more intimate medium. Certain lines that you could play to the back of the house for a laugh on stage, you can’t pull off in a closeup. Thankfully we had an amazing director in Joe Mantello. We had the whole cast from the revival back. I think that informed the work.

I can’t wait!
I hope it scratches your theatre itch. We all need that these days. I feel like a septuagenarian but I’ve been watching Great Performances on PBS to scratch my theatre itch. 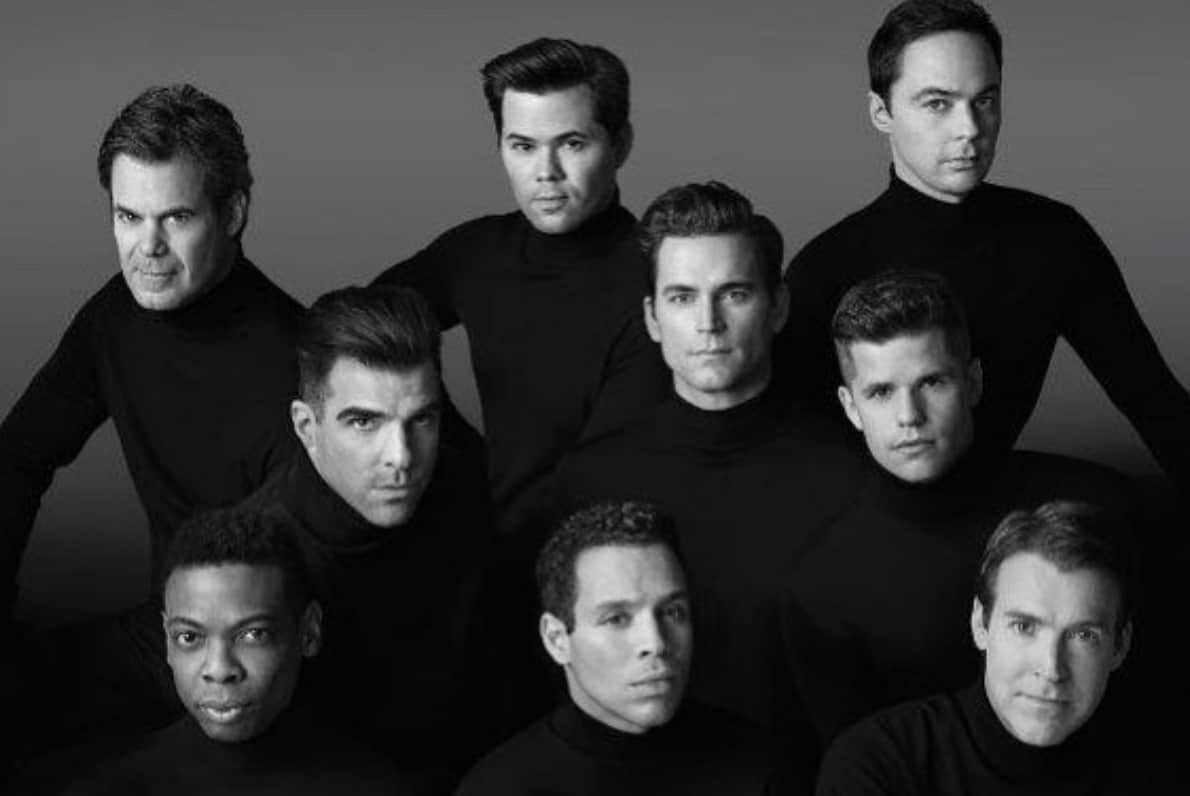 The Boys In The Band Cast (Courtesy Netflix)

How else have you been keeping yourself busy these past few months?
I learned to play piano. I’ve been playing piano and guitar as a creative outlet and to come at something with a beginner’s mind, which I think is something to do to humble yourself from time to time. I’ve got a sourdough starter that I use and I’ve been making that at home. And a lot of things that I normally wouldn’t have time for, like reading something besides scripts. It’s been nice to read fiction. Before all of that, it’s been about parenting. We have three sons who are different ages and we’ve tried to keep them creatively fed and make sure they have physical outlets and things to do. We have to make sure they aren’t just sitting in front of screens every day. That’s been an almost full-time job!

What books have you been reading?
Right now I’m reading The Underground Railroad. I also read an amazing book, Self Care, by Leigh Stein. I read a bunch of books on screenwriting. I tried to put myself through undergraduate education in screenwriting.

We saw on your Instagram that you posted a photo of Kamala Harris and Joe Biden. Why are you excited about that ticket?
Nothing would make me happier than to have an African American woman in office. I like her platform, I like the way she speaks, I like the two of them together. I don’t tell anyone who they’re supposed to vote for or why. I encourage everyone to go out there and vote, but because it’s my personal page with my name on it, I wanted to share my excitement about that ticket.

How Elizabeth Harrison and Jeffrey L. Bowman Are Joining Forces

So, The Gay Pride Parade Happened In...