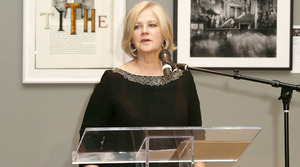 (NEW YORK) A surprising departure of a Time Inc. superstar: the company is saying farewell to its editor-in-chief, Martha Nelson. The illustrious magazine veteran has spent two successful decades at the company, during which she founded InStyle in 1994. The glossy’s launch was an industry home run, shaking up newsstands with its celeb-centric approach to fashion and lifestyle coverage. With Nelson’s departure, the role of Time Inc. editor-in-chief will be discontinued.

Time Inc. CEO Joe Ripp noted Nelson’s accomplishments in a staff memo: “[Martha] has been a driving force here for more than 20 years and has helped build some of our most vibrant brands. She was the founding editor of InStyle—one of the most successful launches ever seen in publishing. Nearly two decades later it has become a global powerhouse and one of our most valuable properties. Martha went on to revitalize PEOPLE and worked to expand the brand across multiple platforms and launch new franchises. Today, PEOPLE is the undisputed industry leader by every measure. Beyond those accomplishments, Martha has been a real leader and a role model to many. I thank her for her years of commitment and I respect her decision to move on at this time.

In a related move, Time Inc. is bringing back 71-year-old Norman Pearlstine for the new role of chief content officer. Pearlstine, who was Time Inc.’s editor-in-chief from 1995 to 2005, is returning to the mothership after an eight-year hiatus, during which time he was at private-equity firm Carlyle Group from 2005 to 2008, followed by five years as chief content officer at Bloomberg.

Rebecca Minkoff Reflects On How She Made It Big