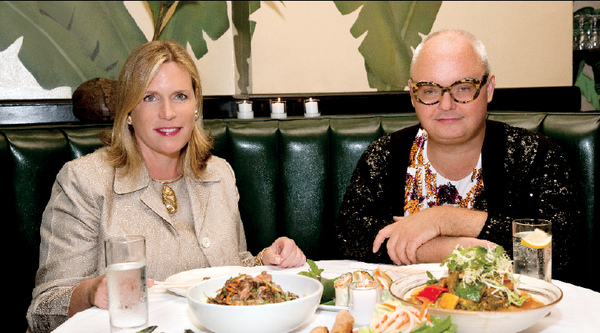 (NEW YORK) The transformation of 45-year-old socialite Marjorie Gubelmann into DJ Mad Marj is among the unlikliest of second acts we could dream up. But who said the turnables were reserved for 20-something rock spawn and model-slash-whatevers? So how did Marj’s moment come about? It was Paper magazine’s Mickey Boardman who persuaded her to break out the Eighties anthems. The pair talk Flo Rida, Givenchy couture, and plans for fashion world domination over dinner at Indochine.
BY PAIGE REDDINGER

How did you two first meet?
Mickey: New York City is the world’s biggest small town. We met in the Nineties but we actually became besties because of Twitter. We do Twitter dinners. Our friend Drew, “Drewpsy” on Twitter, came up with the idea. It’s people like Ariel Foxman, Aliza Licht of Donna Karan, and Cannon Hodge from Bergdorf Goodman.
Marjorie: We’re all a bit silly and can make fun of ourselves.

How did you get Marjorie into the DJ scene?
Marjorie: We were having dinner at my house in 2011 and I was telling some crazy story about being a DJ in college. Mickey wanted me to DJ his birthday party at the Soho Grand. I hadn’t done that in 20 years. You know, I did it with records in the basement of a room, talking to myself on a microphone. I told him I would only do 15 minutes. Well, let me tell you, they couldn’t get me away from the table after three hours. The joke was over. I was hooked!

So what happened next?
Marjorie: So Lyor Cohen, who was Tory [Burch]’s boyfriend and ran Warner Music and discovered Jay-Z and Kanye, said “Oh, you have to go to Scratch Academy.” It was founded by Run-DMC.
Mickey: Something people don’t know about Marjorie is that she is very plugged in to the music industry. I mean, she is at the Grammys every year. She is always posting photos and Instagramming photos of her with people like Flo Rida. I know the name, but I don’t even really know who that is.
Marjorie: I love Flo Rida.
Mickey: When Marjorie DJs, you never want to stop dancing. She just plays every great dance hit from the last 30 years. It is heaven for gays.

What were the other people in the class at Scratch like?
Marjorie: Oh, my god, they were amazing. They were really young, like teens or in their early twenties. They only played that music with no words. And I’m like, “I’m going to play some Madonna.”

How long have you been having your Tribeca Grand dance parties?
Marjorie: The Tribeca parties started this year. We’ve had five so far. We had dance parties in other places before for two years prior to that.
Mickey: The turning point for me was when you did Chris Benz’s after-party during Fashion Week at The Standard East Village. [It was] in the Wall Street Journal.
Marjorie: It left the joke status at that point.

Give us a glimpse into a party at the Tribeca Grand. Who is there?
Mickey: Luckily Marjorie is friends awith a lot of people who like to dance. Like, Derek Blasberg is always dancing crazy; Giovanna Battaglia is my new favorite. Jessica Hart, Andy Rosen, Tory Burch, Estelle, Nate Berkus. Hanson came to one. All of them. And, yeah, we’re big friends with Hanson, don’t ask me why.
Marjorie: It’s the 80s! Uptown, downtown, gay, straight…
Mickey: It’s Bob Colacello next to some…I don’t even know what…like, some dirty gay underwear model. Bob Colacello was fun at that last one. The whole thing is like a VIP room.

How do you dress to spin?
Marjorie: Whatever zips up. I wear a lot of jewelry.
Mickey: I remember one time she called me and said, “I’m standing at the corner and wearing Givenchy couture and rubies.” It’s always something from Vera Wang, Zac Posen, Michael Kors, or Chanel.

What is your dream DJ gig?
Marjorie: Maybe a big awards show.
Mickey: I think you should do the Vanity Fair after-party. I don’t know if they have a DJ, because I haven’t been. I also see something for Marjorie like DJ’ing for the White House Christmas party, at Versailles, or for the Saudi royal family with lots of falcons and lots of tents. That’s the level I’m thinking. You know something fantasy, exotic, luxury, ridiculous.
Marjorie: Oh I’d be there! I just like to get all of my peers dancing even in an environment that’s kind of staid, I like to get on the decks and see who’s toes start tapping. I honestly think I can get anyone to dance.