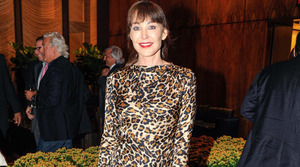 (PARIS) Academy Award-winning actress and Lady Dior spokesmodel, Marion Cotillard, has finally confirmed the pregnancy rumors keeping the internet abuzz for the last few weeks. The child will be a first for both her and longtime partner, fellow French actor Guillaume Canet.The couple met on the 2003 set of Love Me If You Dare and have been together for three years. Canet was formerly married to German actress Diane Kruger. Marion Cotillard was last seen in Christopher Nolan’s action-drama Inception, starring alongside Leonardo DiCaprio. Cotillard is also part of the hotly anticipated cast of Woody Allen’s forthcoming Midnight in Paris.No word yet on whether her pregnancy will affect plans to take part in David Cronenberg’s Cosmopolis alongside English heartthrob Robert Pattinson; the film was slated to start production in Toronto this May.
D’ARCY FLUECK