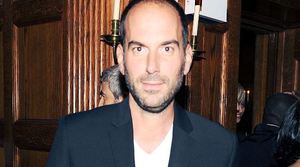 (NEW YORK) As Joe Fresh fêted their new Soho boutique on Broadway last night, The Daily stopped for a chat with the brand’s new top brass, Mario Grauso, who was named COO and second in command a few short weeks ago. The former president of Vera Wang seems to be settling in just fine at his new digs…and the whole NYC-Toronto lifestyle!
BY DENA SILVER

How do you like it so far?
It’s only week two, but I just jumped right in.

So you’re not just decorating your desk at the moment?
No way! Joe [Mimran] has been amazing and his methodology is all about baptism by fire. I’m getting settled into Toronto right now. I got an apartment there, so I am learning the lay of the land.

So you made the big move to Toronto?
I’m going to split each week between Toronto and New York, so I’m really racking up a lot of frequent flyer miles on Porter Airlines.

How’s the commute?
You get on the plane at Newark airport and you’re in Toronto in an hour and 10 minutes; the airport is five minutes from my office. It’s so easy; it’s like taking a train!

Do you like Toronto?
I’ve been there so many times, so I was really into it when I started looking for an apartment there. There’s a lot of energy and it is really young and trendy city. It’s kind of cool.

Nice new Soho digs for the label!
This is such an exciting store, because it’s the new template that we’ll roll out internationally. We’re excited to have all the elements of what will move forward internationally, right here in New York. Overall the core basics are still here, but there’s a big fashion element and an offering of things right off the runway.

Any exciting expansion plans you can fill us in on?
I’m about to announce something in Asia; I’m still finishing up details on that. I think we’ll go to the Middle East after that. I’m excited! We’re going to continue expansion in the U.S., too, so Joe and I are just trying to figure out the next city.

Will you get a piece of clothing named after you?
I don’t think so; I leave the creative to Joe! However, I’m really sold on the jeans. The guys’ jeans are amazing. I am also addicted to the cashmere sweaters. The first thing I did in the new Toronto apartment was place piles of cashmere sweaters in every color.

Louis Vuitton Reveals Plans To Hike Up Prices On Handbags

Which Magazine Is Tyson Beckford Joining?