Marie Claire Ushers In The New Guard Of Power Women 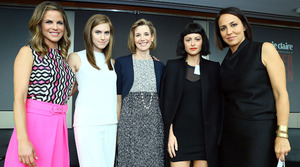 (NEW YORK) Marie Claire held their Power Women luncheon yesterday atop the Hearst Tower, celebrating femmes exerting their influence everywhere from Hollywood and the White House to fashion and the internet. Directors, executives, tech gurus, and politicians dined and networked over a lunch of organic chicken breast and risotto while MC editrix Anne Fulenwider took to the podium to introduce Sophia Amoruso of Nasty Gal, Sallie Krawcheck of 85 Broads, Natalie Morales of The Today Show, and Allison Williams of Girls as the “New Guard” of power women that have paved their own careers in unconventional new ways.

But first vice president, publisher, and chief revenue officer Nancy Berger Cardone held court to laud Fulenwider on her tenure as the (relatively) new EIC. “These are big shoes to fill and wow, Anne, you have filled those shoes not only so perfectly, but your entire wardrobe of shoes is very impressive and I continue to be happy that we’re the same size!” quipped Cardone. She also added that 2013 has been the biggest and best year in the glossy’s 20-year history.

Next up: Amy Cuddy, an associate professor at Harvard Business School whose now-famous TED talk on the correlation between body language and success has been viewed over 2.2 million times. As a social psychologist, Cuddy has studied the body language of those in power versus those who are not and how body language affects the mind and behavior. In her studies, “power posing” for two minutes every morning or before a meeting can actually affect the day’s outcome. Even Fulenwider herself practices power posing. “I was basically doing it out of curiosity after I saw the YouTube video,” said Fulenwider. “I stood in my office [power posing] and we have these glass walls at Hearst, so I can’t imagine what my office was thinking, but I made them all watch it afterwards. It really gives you a surge of energy like you can take over the world.” If it sounds too simple to be effective, keep in mind that 10,000 people have written to Cuddy since she first gave the talk to tell her how it’s changed their lives.

After the inspiring talk, the “New Guard” of power women took to the stage to tell the crowd about how they got their start in their respective industries. Despite being the offspring of TV producer Jane Gillian Stoddard and anchor Brian Williams, actress Allison Williams, who plays the character Marnie on the hit HBO series, actually got cast when a YouTube video she’d made got viewed by Girls’ exec producer Judd Apatow.

Meanwhile, Amoruso famously got her start in her apartment, selling vintage clothing on eBay. “I used MySpace in the beginning before Facebook and Twitter existed,” said Amoruso. “I would target specific people, like editors at Nylon. I’d friend-request them and ask them to check out my vintage clothing; I built a following that way.” Five years ago, hired her first employee off of Craigslist. Just seven years in, Amoruso now has 300 employees.

“We used to gauge power by traditional methods like paychecks, titels, office size, and jet size,” said Fulenwider. “The old rules of power are dead and dying. Today, viral videos get more eyeballs than Hollywood blockbusters and a million Twitter followers has far more influence than a million-dollar bonus.” As it turns out, creative director Nina Garcia has over one million Twitter followers and Fulenwider added that while Garcia was worth a million dollars, unfortunately Fulenwider can’t give her that right now. Well, it’s the thought that counts! We’re sure Garcia is doing alright with all of those TV appearances and such…Check out Marie Claire‘s full list of power women here.
PAIGE REDDINGER