Marie Claire Redefines The Power Lunch With ‘The New Guard’ 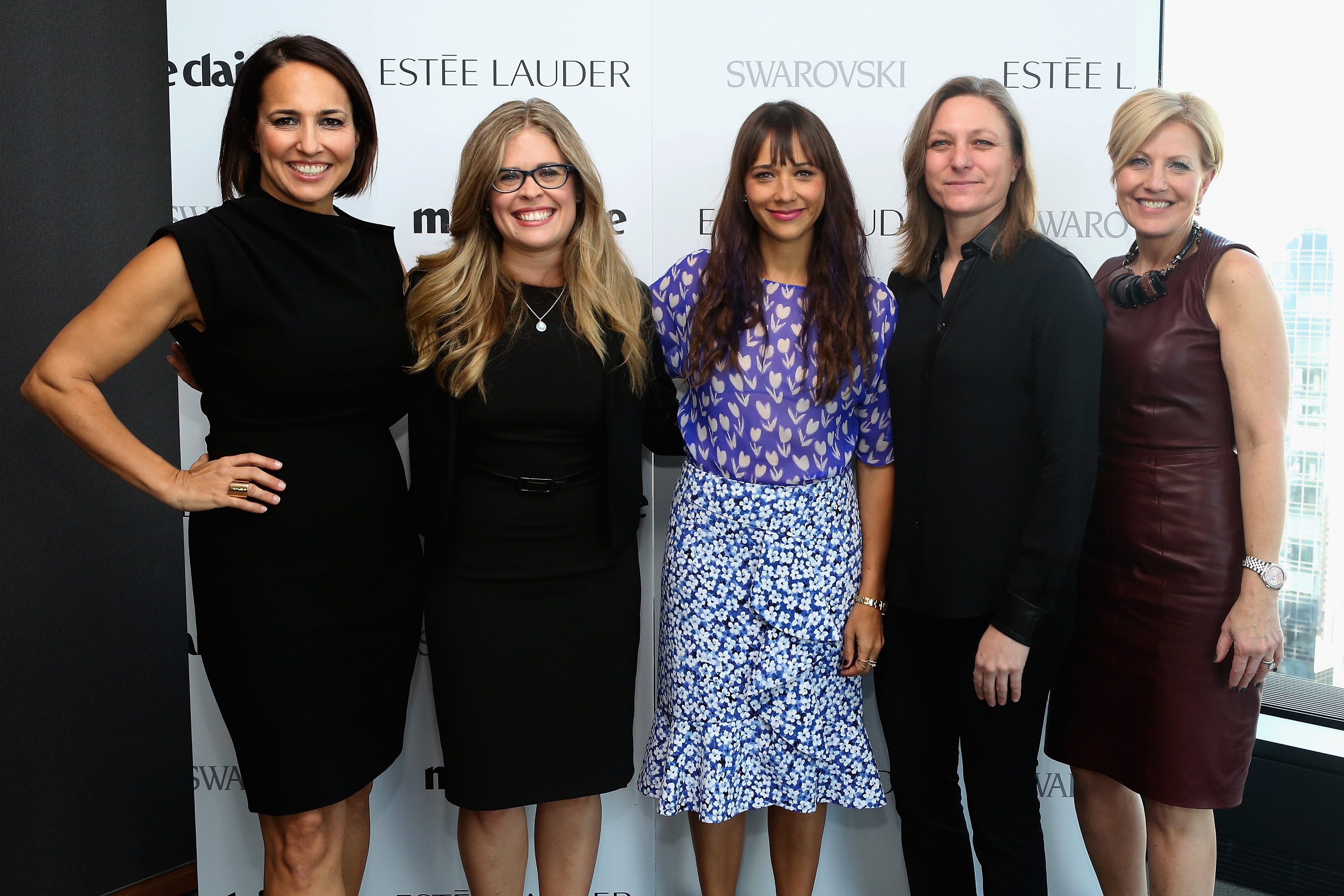 Not your average weekday lunch: Marie Claire held their second annual “The New Guard: Women Flipping The Script” lunch yesterday for 250 pretty awe-inducing women at the top of the Hearst Tower. “We are a room of powerful women. I want you to look at everybody’s shoes. There are the best shoes in this room,” said Marie Claire’s VP and publisher, Nancy Cardone, as the excited gabbing quieted down and the crowd tucked into their bibb lettuce, aged cheddar, and apple salads. “The new guard is a celebration of how power happens, which is making connections. Not just making connections on LinkedIn, but making personal connections that you can turn into a meeting and that meeting turns into a plan and that plan turns into a wildly successful business.” said Anne Fulenwider EIC of Marie Claire. The editrix then introduced the hilarious, outspoken superproducer Betsy Beers (you know her work well if you’ve ever caught an episode of any Shonda Rhimes megahit TV show…) to talk about “How Television Saved My Life”. Beers got laughs aplenty, and made some very sage points applicable far beyond Tinseltown, as the room tucked into chicken paillard with cranberry-dappled wild rice. Next up, a trio of powerhouses in the entertainment biz mused on women in the industry these days in “So Long, Hollywood Boys’ Club,” a panel facilitated by Amanda Decadenet, as gold-trimmed chocolate crunch tarts avec torched pistachio marshmallows hit the tables. Without further ado, a few highlights from the panelists…

Betsy Beers, exec producer of Grey’s Anatomy, Scandal, and How To Get Away With Murder, on her incredibly varied gig: I’m the executive producer of three shows. So what does that even mean? It means I’m qualified to develop, sell, cast, place music, help edit, costume accrue sets, pick writers, fire people, yell studio networking executives, apologize to studio networking executives and of course, buy lunch. I also helped decide that Patrick Dempsey looked great unshaven. Yay me!…I have gone into port-a-potties at awards shows to unzip actresses out of their skin-tight dresses so they can pee…The one thing that I’m really unqualified to do is write speeches. That’s where my genius producing partner, Shonda Rhimes, and the incredible How to Get Away with Murder creator, Pete Nowalk, do brilliantly. Listen at your own risk. Another warning: I swear like a trucker when I’m excited. And f*ck balls, this is amazing!”

Rashida Jones on how women take on daunting new projects versus male counterparts: “My friend asked me to direct a music video and I was like, ‘I’ve never directed before!’ And she said, ‘Who cares, just do it!’. I was thinking of the 360 of all of the things that I didn’t know about and what I’d have to learn: I want to feel perfect at a job when I attack it! I have guy friends who are like, ‘I don’t know what I’m doing I just do it.’ I want that! So I just did it; I figured it out on the way. I think a lot of women are scared to speak up for themselves, so sometimes you have to extract and mine people for their potential and to see what they can do.”

Frozen director Jennifer Lee on how she flipped the script, literally: I was the only female director. A room trying to convince people of such a nuance shift and I remember the film just not getting it’s legs and I went to John Lasseter and I said, “It’s not gonna work. If we keep trying to make Anna some co-dependent who is just too madly in love…I’ve seen it so many times.’ He said, “What do you want?” and I him the story of Anna’s rule by love was all it’s flaws, Elsa’s rule by fear,” and he said, “Say it again,” and I said it again, and he said, “Say it again.” I said it again and for an hour he just went at me to say it so clearly that he said, “Now go tell the other directors”.  I went in a room and I said it and I’m like, “This is the movie we need to make,” and they went, “Oh yeah.”

Netflix VP of original content, Cindy Holland, on greenlighting stellar shows like Orange Is The New Black:  “It’s sort of like second nature, I guess, for me to select those series and the other things we work on is you hear a brave story, you find proven story tellers and producers to bring it to life, and then you get out of the way and support the vision.”