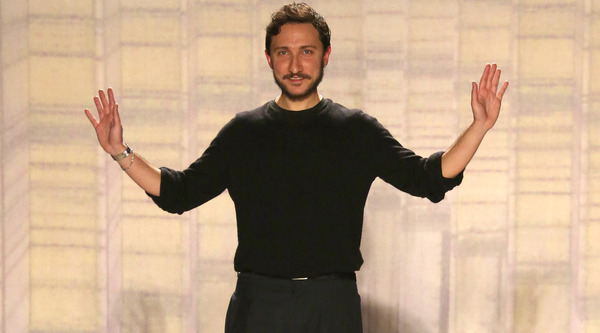 (NEW YORK) Marco de Vincenzo has partnered with luxury e-tailer TheCorner.com to create an exclusive top, skirt, and jacket in macramé, viscose, and silk in gold and eggplant coating. TheCorner.com creates a platform for designers to have “mini stores” in which they can showcase their collection and give shoppers a glimpse into their world via interactive multimedia content. In a video created for the site, de Vincenzo explains that the woman he designs for is “very curious and bold. She wants to stand out from the crowd and be noted.” He goes on to explain that his Spring/Summer 2014 collection is focused on prints with graphic chromatic prints and lacquered laminated surfaces.

The Rome-based designer was recently snatched up by LVMH, who holds a large minority stake in the brand. The luxury conglomerate’s investment in the label was made in February. LVMH head honcho Bernard Arnault‘s daughter, Delphine Arnault, who is the executive vice president at LVMH, was said to be instrumental in scouting de Vincenzo. TheCorner.com has also done exclusives with hot young designers like Christopher Kane; Kering took a 51 percent stake in the brand last January. Other designers that have done exclusives with the e-tailer include Carven’s Guillaume Henry, Raf Simons, and Paul Smith.