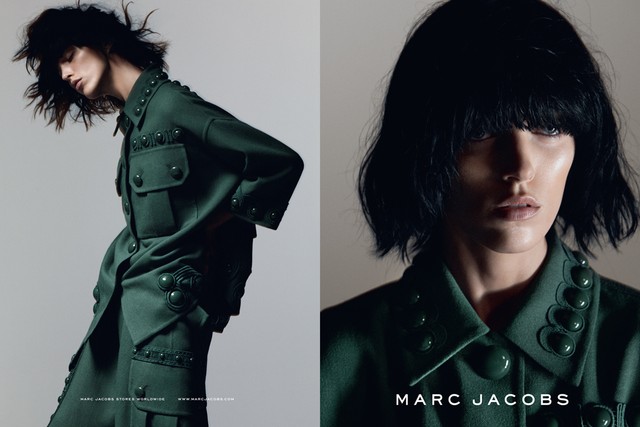 Olivier Rousteing might have his army of burger-eating models in his latest Balmain campaign, but Marc Jacobs has quite the gang of mods in his Spring 2015 ads. The knockout lineup includes Karlie Kloss, Anja Rubik, Joan Smalls, Kendall Jenner, Natasha Poly, Anna Ewers, Jessica Stam, Issa Lish, and Adriana Lima. The January issues of your fave fashion glossies will be stocked with these new ads; expect nine spreads, each featuring a portrait and full-length image of each girl. The campaign was shot by David Sims and styled by Katie Grand, while Diane Kendal tackled (extremely minimalist!) make-up duties. Jacobs’ troupe of mods rock black bowl-cut wigs in the ads, just like the ones Guido Palau chopped into bowl cuts for Jacobs’ NYFW show. So, where do we enlist to join Jacobs’ army?