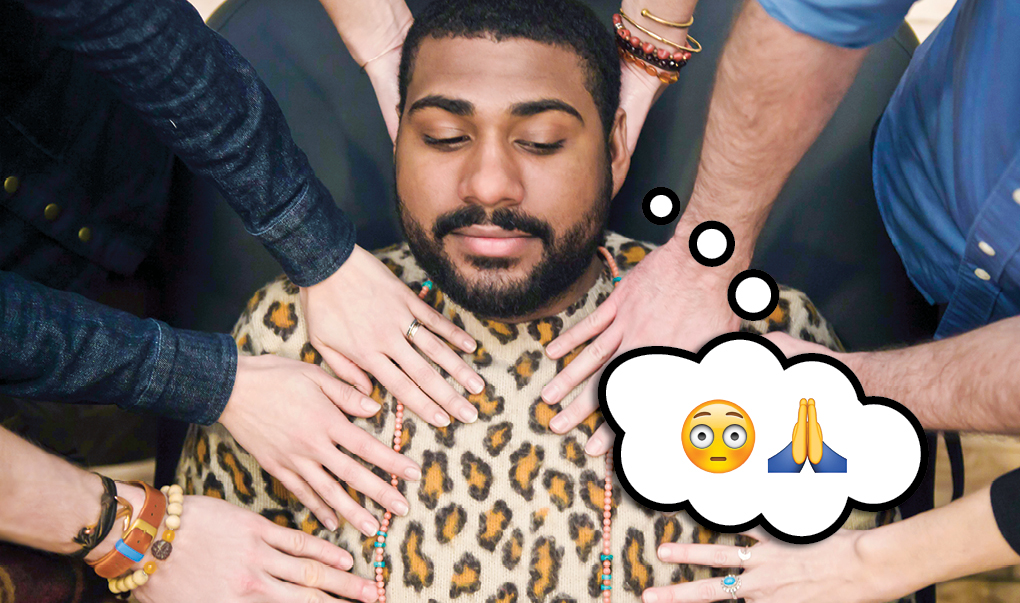 GQ’s globe-trotting Style Guy averages a gazillion parties, interviews, and red-eye flights a month—and that’s before factoring his wild fashion week schedule into the mix. So your Daily sent him to City Wellness Collective, an oasis for all sorts of healing arts, to make sure he was primed for peak performance.

CRYSTAL HEALING & REIKI
The Healer: Jessica Brodkin
“I physically use crystals, oils, and my hands, but I don’t really need the crystals and oils. They’re enhancers. I really just connect. I’ve read a lot of books, and I’ve had Reiki attunements from the master who worked on me, but the way that I heal is a little weird. I call it Reiki, and it sort of is, because I use the chakra system, but I kind of do my own things.”
Why crystals?
“Everything has an energy. We’re all just waves and particles. Crystals and oils have a certain energetic frequency, which helps people come to the frequency where they need to be.”
Fun fact!
“I went to MIT, and I worked at the CIA for 11 years. I have my master’s in math. And I’m a stand-up comic, so I also heal people through laughter.”

SOMATIC HEALING
The Healer: Michelle Keinan
“I’m the only licensed practitioner of the Grinberg Method in New York. I look at the feet, so I don’t have to rely on people’s biased experiences of what’s going on. It often takes more inquiry
to get to the root of something. A lot of the work I do is physical, so you don’t have to believe in anything—we make the change together.
Fun fact!
Keinan worked as a marketing executive before transitioning into holistic medicine. She opened the City Wellness Collective in September 2016 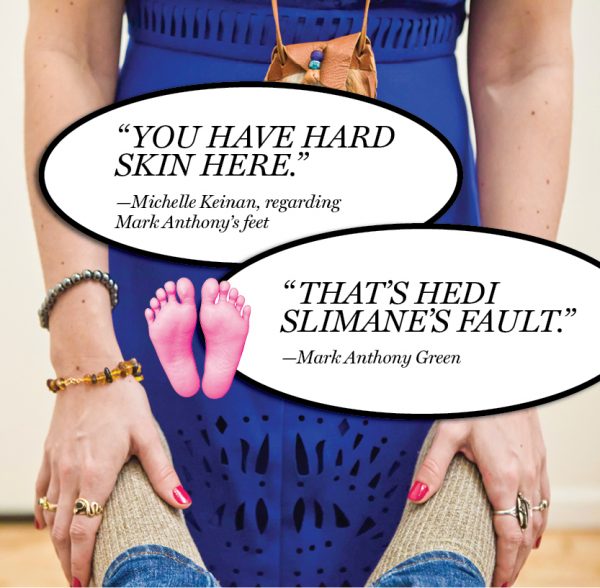 SHAMANIC HEALING
The Healer: Kristen Boyer
“Shamanism is basically the world’s oldest spiritual belief system. I work with a practice called soul retrieval. If someone experiences trauma, part of their soul can break away or get stuck. In shamanism, we can actually go back and get that part of the soul that left. I use drums and rattles to induce a trance-like state, and that allows me to communicate with ancestors, spirits, angels, and guides, and that creates visions.”
Fun fact! “I also do exorcisms, but we don’t talk about that a lot.”

ACUPUNCTURE
The Healer: Michael Regan
“I integrate acupuncture with the language of Western medicine—I look pretty preppy, but I’m 40 percent hippie. Acupuncture is very flexible, which is one of the many reasons I appreciate it. You can treat acute conditions, as well as chronic conditions like high blood pressure, orthopedic issues, and high cholesterol. Immune support, fertility, anti-aging, and stress management also respond well to acupuncture.”
Fun fact!
“I’m covered by many insurance plans.”

ADVANCED BIOSTRUCTURAL CORRECTION
The Healer: Eric Levinson
“Mark Anthony got to try the postural work that I do, but I also do holistic health and nutrition, and that focuses on detox, nutrition, diet, and all that good stuff.”
Fun fact!
“I also do a form of neurofeedback that’s brand-new called brainnasium—it’s passive, so there’s nothing getting sent into your brain, but we read the brain waves, and you listen to tones that respond to your brain waves in real time and help to induce a higher alpha-theta state, which is correlated to peak performance, calm, creativity, and focus.”

PLUS! MARK ANTHONY WEIGHS IN…

How were you feeling when you strolled in here, Mark Anthony?
I was a lot more tense and stressed. I never really sit down to take inventory of how I feel. You just kind of keep working until there’s no more work. With all the Fashion Weeks back to back [yawns], it’s kind of a marathon. It’s easy to not notice stress.

Of all the treatments you did, which did you respond to the most?
Eric was pretty legendary. I know that my back is bad—I have a lot of pain and issues with it. He seemed to help my posture after like 10 minutes.

Have you ever been healed by crystals before?
No. That was surprising—I could definitely feel something happening. For a lot of this, you have to mentally accept and believe in certain general principles. I’m not sure that I really got to that point. I was least excited about the feet thing, but I think I felt that the most. And there was one [treatment]—it kind of reminds me of a fortune-teller…

The shamanic healer? With the drums?
Yeah. Super sweet; great voice. That self-reflection…if somebody doesn’t force me to do it, I won’t do it.

Have you ever had acupuncture before?
No. I gotta say, I was most excited about acupuncture. But there’s no such thing as a small enough needle. Even if you make a needle that is half the size of the needle that he put inside of me, I would still say that that needle is too big. You gotta get over that if you want to get into the acupuncture game. I walked in here not over that, but it was cool.

What was your takeaway?
Um, the honest answer that you probably can’t use is I spent a lot of time thinking about the people who were working on me. They’re fascinating. Everybody is super weird and cool.

I can use that. You’re a writer. Thinking about people is kind of what you do.
I’ve always kind of held a stigma or phobia when it comes to holistic medicine and healings and wellness, because it just seemed impossible. A lot of it is mental—I believe something has changed, so now I will act differently. If you need someone to call out your power animals to raise your voice at work, then you need that. I have good editors and good friends who serve as my power animals. But it’s nice to self-reflect and to think about all this.

As an artist as well as a writer and journalist, which of your sensibilities were especially attended this morning?
The shamanic healing—her set-up was the dopest, aesthetically. She crushed it with the feather. Everybody, even the back untwister, Eric, was an artist, which was really cool. They really believe in what they’re doing, and that’s awesome. I’d rather take a super-passionate lady with a feather 99 percent of the time than a lethargic doctor who doesn’t really care. And I feel better.

Now you’ve gotta maintain the zen.
Zen is tough. I always look at zen as a gift, a victory or something—like it’s only achieved after everything is done. One thing I learned today is that everybody here looks at zen as a state of mind, a lifestyle. That’s what I’ve got to work toward.