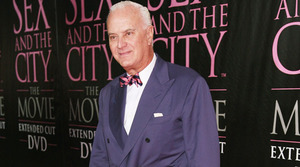 (NEW YORK) Manolo Blahnik is getting some haute new digs at Holt Renfrew in Toronto. The shoe purveyor opened a shop-in-shop yesterday at the prestigious retailer’s Yorkdale Mall location, which has undergone recent renovations including the expansion of the shoe floor, which now clocks in at 10,000 square feet. The shop will be designed along the same lines as the brand’s freestanding stores. U.S. president George Malkemus was reportedly on hand to meet with Manolo enthusiasts to give them a preview of what to expect for Spring 2014.

According to WWD, the brand’s shoe sales were at an all time high (nine years after Sex and The City, the series that made the brand famous, went off the air!), said Erin Cerrato, the VP of women’s footwear at Holt Renfrew. So which styles are the most popular? The classic BB pumps, the Swarosvki-crystal Pachacry heels, and Carrie Bradshaw’s very own Hangisi bejeweled silk heels, of course. Manolo Blahnik will join other already established shop-in-shops at the retailer including Jimmy Choo, Gucci, and Salvatore Ferragamo, with Christian Louboutin expected to get in on the chicly heeled action next year.