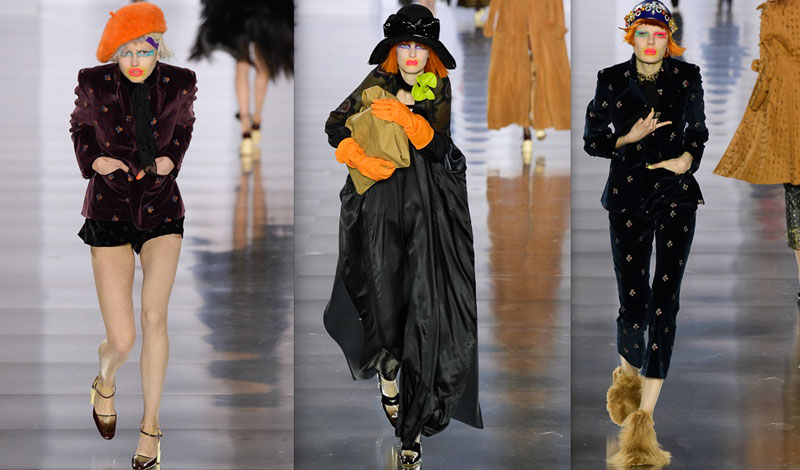 He’s back! John Galliano delivered the kind of theatrical show in Paris for Maison Margiela that the fashion world had been waiting for, after what felt like a warm-up show last season in London. Some called the theme “crazy cat lady”, but the show notes read, “A fashion lo-fi: like Polaroids inflected with acid dreams.” Galliano’s mad woman certainly reflected his mad genius. The models wore clownish neon makeup, some clutched paper bags, others wore dishwashing-apropos orange gloves, and Galliano took it a step further when he even had some models slouch or  hobble down the runway. One went so far as to walk bent over, as if afflicted with osteoporosis (one might also say she looked like she was en route to the nearest restroom, chéris!).

These were Galliano’s riffs on Blanche DuBois and Edie Bouvier Beale. Women living on the edge of reality. Galliano knows how to tell a story, but he also knows how to whip up divine clothing. Highlights included a slightly askew pinstripe bustier worn over slouchy black pants, while a patent leather floor-length patent trench was topped off with a yellow orchid choker, and a decadent leopard and snakeskin cinched waist coat worn with pinstripe pants cropped just below the knee. Finally, Galliano’s got his groove back.