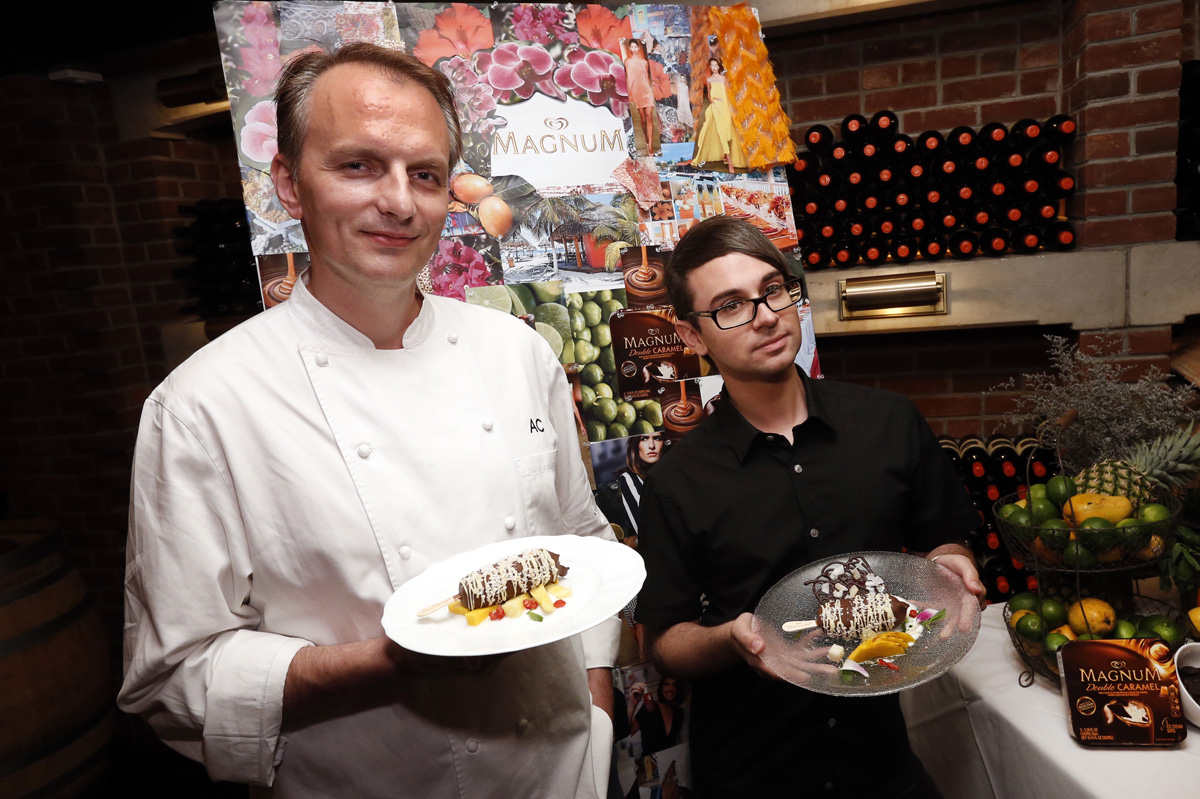 When two of life’s luxuries–fashion and chocolate–fuse together, the result is nothing short of magical. Last eve, thanks to MAGNUM Ice Cream, two of our favorite indulgences were celebrated (and tasted) at Lafayette in NoHo, to celebrate a special collab with chef Andrew Carmellini and designer Christian Siriano. The two put their creative senses together and created “America’s Most Fashionable Chocolate Dessert.”

“I never did anything like this before,” Carmellini said to his guests before the tasting began. “The reason this partnership was very intriguing for me is because chefs like me don’t often cross paths with the fashion world in this way. We took something very visual and turned it into something you can eat.”

Carmellini and Siriano combined a chef’s love for seasonal ingredients along with the fashion sense and trendiness of a designer in order to create a truly fashionable and indulgent treat. Siriano incorporated his favorite trends into the creation by adding style through colorblocking, lace, and embroidery. Carmellini enhanced the flavor with colorful fruit, white chocolate patterns, and coconut drizzle all on top of the already-decadent MAGNUM Double Caramel Bar. The result was tasty and original and (almost) too pretty to eat.

MAGNUM has been all about the  intersection of food and fashion since their introduction to the U.S. four years ago. Since 2011 MAGNUM has done chic partnerships with the likes of Karl Lagerfeld, Rachel Bilson, and Zac Posen.

“When MAGNUM reached out to me it was an easy decision,” Siriano said. “I was really intrigued. I went to the Karl event when they first launched, and it was one of the most amazing events ever!”

So, just how much of a chocolate fan is Siriano? “At my office, we all have the double caramel bars from MAGNUM and every day at around 4 p.m., everyone in the entire office stops and eats the bars,” Siriano admits. “They’re so good–it’s the best part of the day!” Sounds delicious indeed! Plus: Enjoy your own at-home version of Carmellini’s recipe!
KATHLEEN HARPER

Directions:
Coconut sauce: Carefully open can of coconut milk and spoon about half of the thick coconut cream from the top into a bowl and set aside. Pour half of the remaining thin coconut milk into a small saucepan. Add sugar and bring to a boil over medium-high heat. Boil until reduced by half, about 5 minutes. Combine the reduced coconut milk, coconut cream, lime juice, and peel from ½ lime. Refrigerate until cold, about 1 hour. (This sauce can be made ahead and kept in the refrigerator up to 2 days).

Fruit preparation and dessert assembly: Pell the mango and cut the flesh from the pit. Cut into ¼-inch thick slices. Peel the pineapple and cut into similar slices as mango.

To serve, spoon about ¼ cup of the coconut sauce into the middle of each serving plate. Place a decorated ice cream bar in the center of each plate. Arrange sliced mango, pineapple, and raspberries around the ice cream bars. Grate lime peel from ½ lime over the top of each plate and garnish each plate with a few basil leaves. Serve immediately.

The Next Generation: Palmer Taipale