Magnifique At The Met, Thanks To Harry Winston And The Society of MSKCC 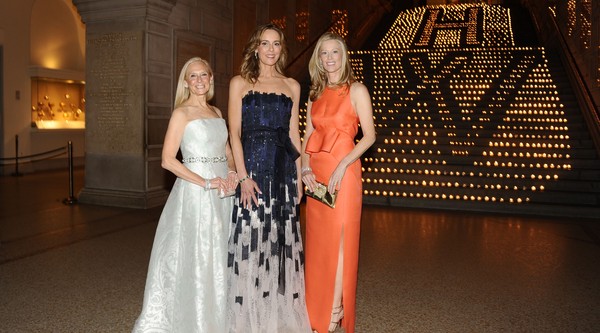 (NEW YORK) Another night at the museum! Last evening, New York’s haute social set came out in their finest fashions to fête the sixth annual gala for The Society of Memorial Sloan-Kettering Cancer Center, sponsored this year by Harry Winston. The event was held at The Met this year, in the Sackler Wing’s Temple of Dendur, with a chic set of co-chairs: Shelley Carr, Julia Koch, and Karen LeFrak. “This year we are raising money to help kidney cancer patients, which is an area that’s been underrepresented,” said Dr. Annette Rickel, president of The Society of MSKCC.

The ladies at the event donned fashion’s biggest names, and these dresses were not borrowed, darlings. Rickel wore a navy lace Monique Lhuillier, which she said was previously worn to The Grammys, but she added, “I don’t know who wore it, but it didn’t reduce the price!” Executive board member Robyn Joseph was receiving plenty of attention in her periwinkle tulle Oscar de la Renta gown. “I saw it in the window of their store over Christmas and I had to have it!” Joseph said. When asked if she’d ever wear it again, she laughed and said, “No! But I have two teenage daughters who love fashion.” Lucky girls!

Meanwhile, Muffie Potter Aston arrived in a fishtailed, cherry red Zac Posen dress and palled around with peach Gucci-clad Caryn Zucker, wife of CNN Worldwide president, Jeff Zucker. The last time the l visited The Met? Aston had been two weeks ago to visit the Indian exhibit and have lunch with friends, while Zucker said, “I was here two months ago with my ninth grade son, who had an assignment to write about Greek jewelry. We had trouble finding the case.” Aston did not miss a beat, exclaiming, “You? You had a hard time finding the jewelry? I don’t believe it!”

Other fashionable attendees included Lottie Oakley and Amanda Ross, who showed up in matching frocks, Julia Restoin-Roitfeld, Tory Burch, Zac Posen, and Crystal Renn. Posen had showed up as a guest of Aston, who was, of course, decked to the nines in his dress. Meanwhile, Renn looked très belle in a black one-shouldered Armani Privé gown. While she’s normally a Rick Owens and Helmut Lang gal in her everyday life, she loves to get all dolled up as well. “I love a night out! It’s fun to choose a gown and have that magical old school feeling.” Later, after working her moves for the camera, Renn was more fascinated by those photographing her, exclaiming, “You guys! These photographers are so interesting. They have the best stories!” And this came from a girl who’s worked with every major photographer in the biz…she would know, non?
PAIGE REDDINGER