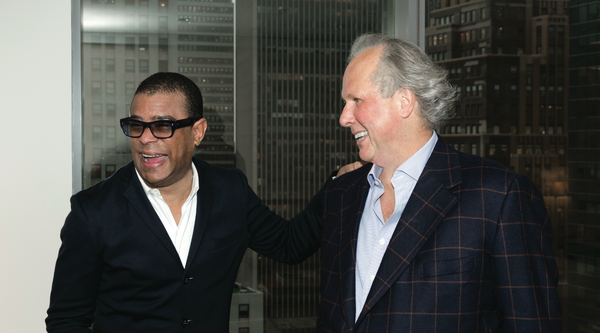 (NEW YORK) After 20 years at the helm of the hautest media brand on the planet, Vanity Fair’s fearless leader requires little introduction. The Oscar party, the restaurants, the haircut, the Rolodex—you know the drill. But do you know the man? We sent the inimitable George Wayne—VF’s resident jester and the undisputed master of the wicked celebrity Q&A genre—to give the biggest name in the mag game a taste of his own delicious medicine.
BY GEORGE WAYNE

GEORGE WAYNE: Twenty incredible years and counting, GC—and hopefully 20 more at least!  This interview will be an instant classic. Let us start with fashion: What is it you enjoy so much about a Carolina Herrera show, where you are a front-row perennial season after season?
GRAYDON CARTER: I go to Carolina’s show because of Carolina herself. She is a dear old friend and I happen to love my wife in her clothes. Plus, I get to see Reinaldo play the role of majordomo in terms of seating everybody and ordering people like me around. Reinaldo, in fact, would make a perfect maître d’. If he gets offers from this suggestion, I would appreciate a head-hunting fee.

What other shows are must-see for you?
I also like going to Ralph Lauren and Diane Von Furstenberg and any others I can squeeze in during the week.

What year did you move to New York, and from where, GC?
In 1978 from Ottawa, Canada.

Ah, yes, Ottawa—the most boring big city in the world.
If you say so, GW. I’ll tell you, it was a pretty wonderful place to grow up. I left there at the end of the summer of ’78 to work for Time.

As a 10-year-old growing up in provincial Ottawa, what did you dream of becoming?
Well, most of all, I grew up wanting to be a New Yorker.

Even then?
Pretty much. And later, when I was in my teens, I envisioned myself as a painter or playwright.

Growing up in provincial Ottawa, did you have Sitka spruce and red cedar trees in your backyard?
Yes, it’s a very woody, snow-filled part of the country. We had a skating rink out back.

How glamorous! You used to be E. Graydon Carter. What does the initial stand for?
Edward—but my father went by Edward. I was always Graydon, or Gray, to my family and most of my friends.

And who is your favorite tailor, GC?
Anderson & Sheppard, ever since I could afford them in my early thirties.

Favorite pop star?
That would have to be Mick Jagger.

And your favorite movie of all time would be?
The Philadelphia Story—it’s a crisp, brilliant film. I do love the fact that Jimmy Stewart plays a reporter for a magazine called Spy. It was one of the influences for us choosing that name for our magazine in the mid-’80s.

Where does GC get his signature coif styled and feathered, and how often?
A friend from Connecticut by the name of Craig Linley comes over to my house every two to three weeks. He sometimes cuts my kids’ hair, too.

And what will be the title of your memoirs?
Friends have suggested Magna Carter—oh, God. I was thinking more along the lines of Do I Have to Dial 9 to Get Out of Here?

Thank you for giving me a headline for this interview, GC. I’m looking forward to reading those memoirs and having you recall in fullest detail your meeting Princess Diana for the first time at a reception hosted by you at the Serpentine Gallery. There are classic images from that event that will forever be part of your video hagiography. It was a seminal moment in her life. She wore that gorgeous, short, sexy black dress, and it was her first public appearance after Prince Charles declared he was guilty of infidelity. What do you remember from that night, GC?
Yes, I think that dinner was the very same night that Prince Charles went on television to admit he was having an affair. But Diana kept her word and came to the dinner and was as lovely and as charming as ever. You know, she was a very normal person outside of all of that. She did, however, seem emotionally brittle that evening, but she managed to maintain her composure. On that night and others, she expressed her fascination with Jackie Kennedy. I think she felt she was having the same experience with the Windsors that Jackie had had with the Kennedys.

Where does GC like to venture when wanderlust takes hold?
Europe. A new favorite spot is the Mayr spa in southern Austria. My wife and I went there in late November to sort of unwind and rejuvenate. The Herreras love it as well.

There won’t be any sweltering through the Serengeti for you, I suppose?
Given the pressures of the magazine, I need access to the Internet and a constant flow of packages from FedEx. So the Serengeti will have to wait.

How often does GC have lunch with Emperor Newhouse?
Usually every ten days to two weeks.

You know, GC, those of us who are fortunate enough to have the opportunity to work at your behest over all these years have come to realize just how brilliant you are. You are the modern master of pop-erature—pop literature—and you possess the most uncannily prescient mind. As you know, that is the gift all great editors possess, and you have it in spades.
Thank you, GW, but you still won’t be getting a raise.

Since I have your undivided attention, I have to tell you, GC, that I was rather miffed after reading Vanity Fair #628—the Kate Moss cover—and finding that the writer made no mention that it was I who first introduced Kate Moss to Johnny Depp. Naomi Campbell and Roy Liebenthal will attest to the fact that I introduced them in 1994 at the celebrity-infested boîte of the moment, Café Tabac. As you’ll no doubt recall, GC, Naomi and Kate were an inseparable duo back in those days. Naomi’s nickname for Kate was “Wagon,” for some reason. So Naomi and “Wagon” showed up to Café Tabac one night, and I instinctively grabbed Kate’s hand and walked her over to Johnny Depp, who I didn’t even know, and said, “Johnny, meet Kate.” Who could have known that, because of me, they would go on to trash hotel rooms across the globe for years and years to come?
I will make sure to alert the writer, James Fox, to what you have just declared, GW.

Café Tabac was where all the supermodels went to let their hair down back then.
Yes, I am aware of that.

I’ll also never forget the night at Tabac when Bono showed up with Christy Turlington and got her so sauced on shots of whiskey…
That’s quite a story, GW.

Have you taken a private tour of One World Trade Center—the future home of Condé Nast—yet?
I haven’t been on a tour yet, but others here have. I’ve been to the office building beside it to see the view from our floor.

Are you excited about the move downtown?
I wasn’t at first, but I’m excited now. People are saying it’s going to be the 21st-century Rockefeller Center, and the more I go down there, the more I think they’re right.

But don’t you think Ground Zero is haunted?
If it’s haunted, then the entire island of Manhattan is haunted.

Edith Piaf or Charo?
Piaf, of course, though I actually met Charo some 30 years ago when I was at Time.

GW’s favorite Vanity Fair Oscar-party moment ever was holding Gwynnie Paltrow’s statuette the night she won. Remember that breathtaking pink Ralph Lauren gown she wore, GC? What are the most memorable moments for you over the many years of your world-famous party?
I always take my children, and if there was ever one moment, it was the night they were introduced to Muhammad Ali.  For some reason, it’s always struck me as something they’ll never forget.

Any special surprises planned for this year?
We always try to do something special. Of course, we also try to keep it a surprise for as long as possible.

And who will have the distinct honor of sitting to your right at your über-exclusive pre-dinner party?
Sitting to my right will probably be Fran Lebowitz. She usually draws the short straw.

What do you always order at the Beatrice Inn?
Well, we just changed the chef there, but I usually order the iceberg wedge and the chicken.

Who is the new chef?
That cannot be disclosed at this time, GW.

Will there ever be an outpost of the Waverly Inn at the Wynn resort in sunny Las Vegas?
A Waverly Wynn? No, I don’t think so. We’ve been approached a number of times, but we’re not sure how well it would translate.

I don’t believe that the lesbian woman is truly ready to be the next mayor of New York City. GW is backing Joe Lhota. Who would you like to see in Gracie Mansion?
Aside from Ray Kelly and Christine Quinn? Fran—I think she’d make a fabulous mayor.

And lastly, because it’s The Daily, are you happy with your new creative director?
Chris Dixon is a marvel and a joy to work with. Plus, he’s Canadian, so he gets all my hockey jokes.

Well, the reviews are unanimous: GC still rules! Thank you, my liege.

The Truth About Ruth Reichl