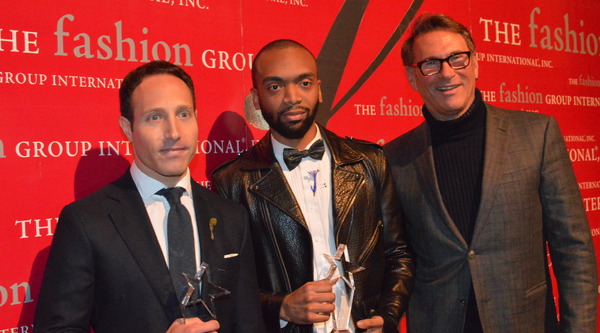 (NEW YORK) The winter winds were acting up during The Fashion Group International’s 2014 Rising Star Awards, but inside Cipriani’s 42nd Street location, the crowd was warm, and quite happy. The attendance of emerging designers in the categories of accessories, beauty and fragrance, home interiors, fine jewelry, menswear and womenswear gave off a decidedly optimistic vibe, but the midday mimosas helped the ambiance as well. More than 40 nominees took a pause from their busy workdays (pre-fashion week, nonetheless) to schmooze, booze, and pray that they would be taking home an award. Charles Harbison, who nabbed a nom for his womenswear collection, Harbison, was a fan of the libation-tinged lunch. “I’d prefer if I could do this on a regular basis,” Harbison said. “I feel like my productivity would be increased if I could have a little buzz in the middle of the day.” Indeed!

Before he took to the podium as the keynote speaker, Simon Doonan imparted a bit of speech-giving intel. “I’m a big believer in brevity,” he explained. And thus, he kicked off the luncheon with advice to the noms on not spending their parent’s 401K on a fashion show, and reminding everyone not to get it twisted and to just have fun.

Doonan preluded the main course, which was directly followed by the awards presentation. As each winner was handed their Movado-designed trophy, a few designers shared the stage as the tie of winners was announced. The boys behind Warby Parker, Neil Blumenthal and David Gilboa, won alongside shoe designer Edmundo Castillo, while Pyer Moss’ Kerby Jean-Raymond and Ian Velardi tied in the menswear category. But there were not the only ones gracing the stage with their presence, as there were also a handful of cheeky presenters including Hal Rubenstein, Stephen Burrows, Brooke Jaffe from Bloomingdale’s, and Amy Astley from Teen Vogue. The final award, which was won by HONOR designer Giovanna Randall, was a sweet way to end the afternoon, as was the tiramisu for dessert.
DENA SILVER

Jonathan Saunders Shuts Down His Company