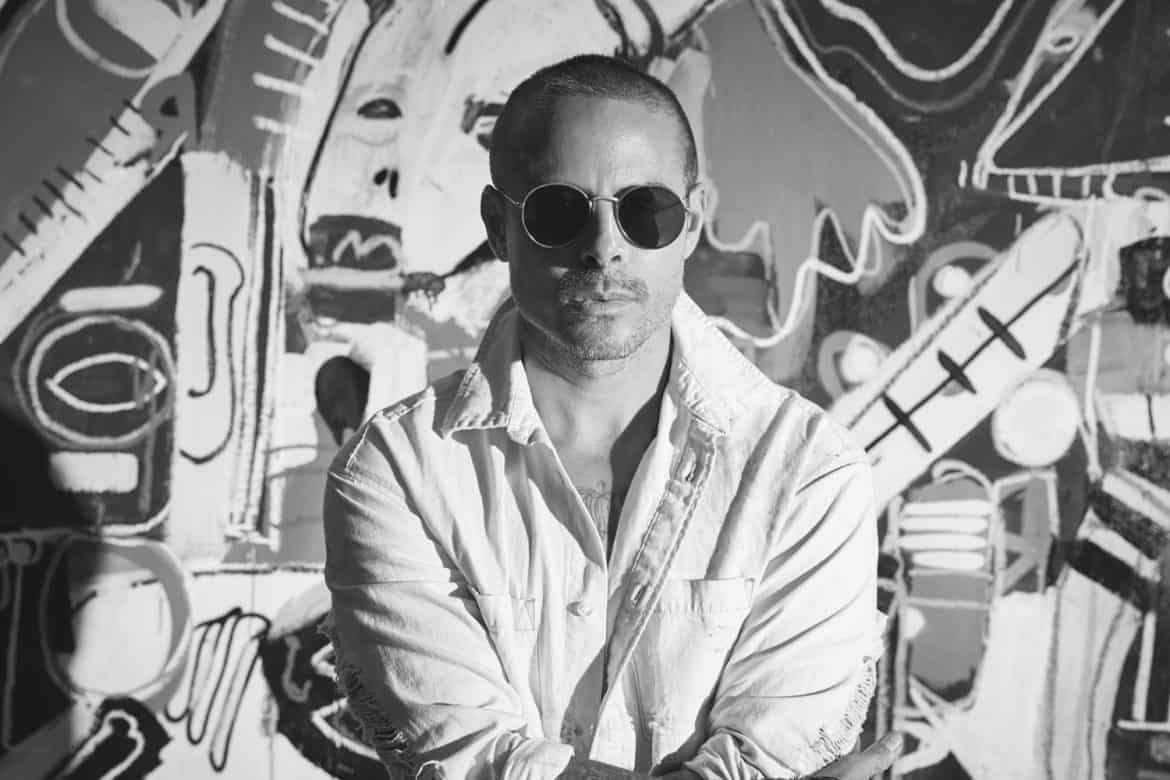 The Daily kicks off Art Basel Miami tonight with a party at the Faena Hotel featuring work by L.A.-based contemporary artist Louis Carreon. Below, he discusses how important art has been in his life, and his time as a streetware designer (before it was trendy).

You’ve been attending Art Basel since 2015 — what brings you back every year?
I come back to Art Basel every year in pursuit of the American dream. As a contemporary painter that comes from the graffiti world years ago, the thought that I can use resources, my talents, and strategic partnerships, galleries, etc., to expand my career is very stimulating to me.

Tell me a little about the Ballerina collection!
The Ballerina collection was inspired by growing up in Los Angeles. The ballerinas represent thespians, actors, poets, models, dancers — whoever moves to California, to Hollywood, stimulated to come and be a celebrity by reaching their goals. The ballerina represents them and the lust and addiction that beats them up along the way. If you notice, my ballerinas look strong at first, but if you look closely their dresses are moved and tattered. They’re in weird positions that aren’t really formal when it comes to that type of dance. They have bottles of booze on the floor, snakes next to them. 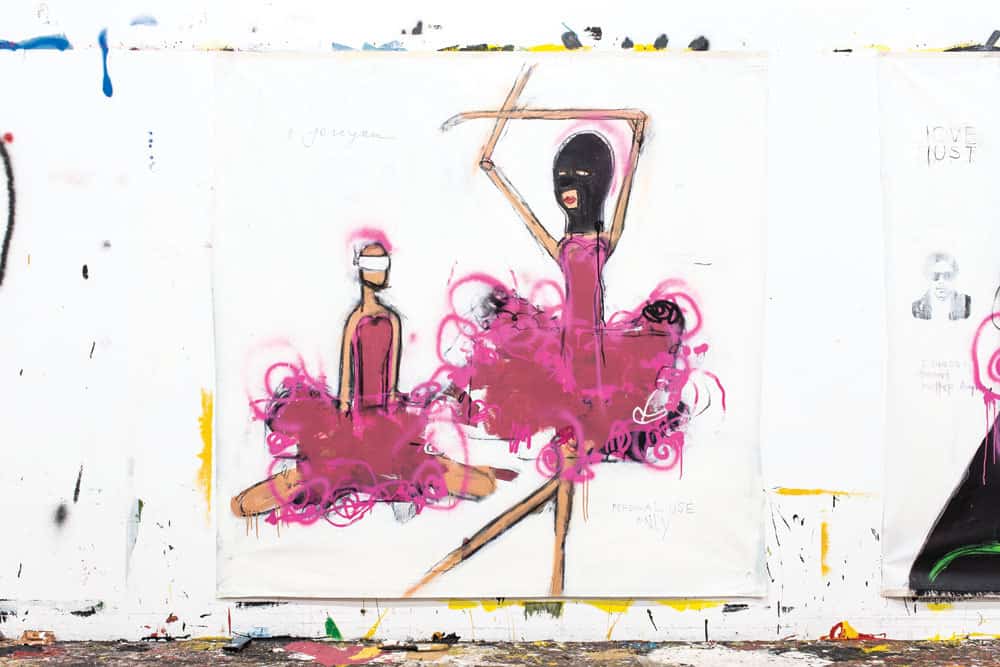 It just represents all the people that come here — which is so many people — in pursuit of the American dream. They get caught up in their ego and addiction, become tattered, and fall victim to the dangers of ego versus mastering your craft. I think I was part of that, and fell victim to drugs and ego and all the things that just straight up derail you from keeping your eyes on the prize and being able to manifest your own destiny. So that’s what the ballerinas mean to me. They’re just broken dancers who should have loved themselves more.

How long had this concept been in your brain before you started working on it?
I’ve done very very similar things — narratives that weren’t physically the ballerina, but they’ve been people before. It’s love and lust and it’s something I’ve been doing for literally 15, 20 years. I’ve been painting the narrative of self love/addiction/she loves me/she loves me not/he loves me/he loves me not-type of stuff, so it’s a lifelong narrative. Right now, the ballerina happens to be what’s being projected.

Why was the ballerina the right profession and figure to express these ideas?
To me, when you see dancers they’re just beautiful. And ballerinas are very iconic. I’m very inspired by [Edgar] Degas, and Degas did ballerinas. He’s awesome. I literally took a piece of one of my favorite artists and spun the narrative to work into my contemporary space and relate with pop culture now. 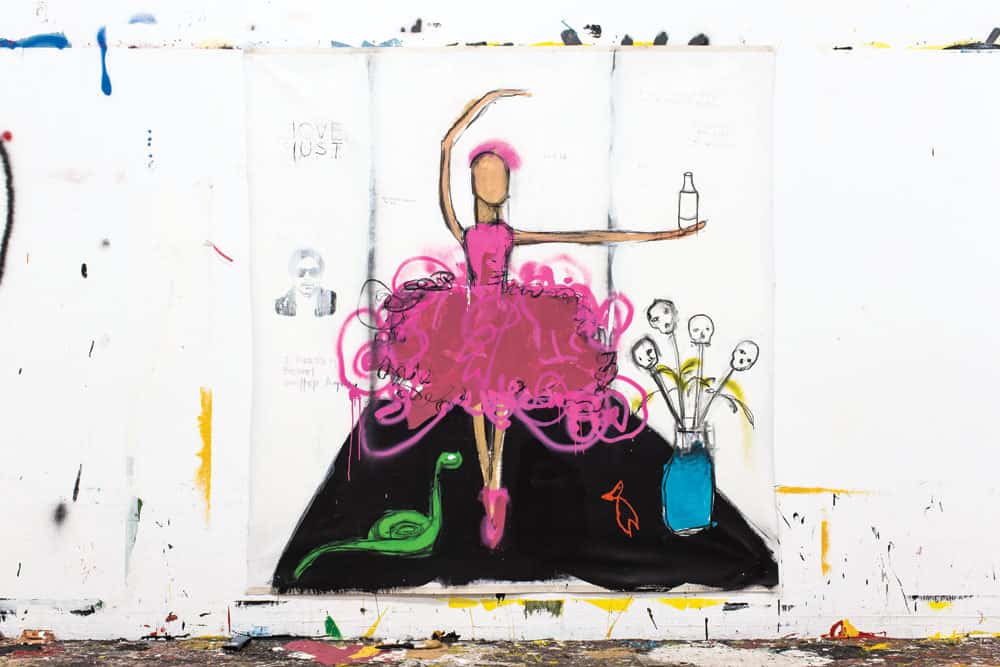 I read that you did a lot of tagging and spray painting in your youth. Tell me a little bit about your early days.
I started painting and graffiti in 1990 with a crew out of Long Beach called KBH. Graffiti was my first addiction of art and I grew up tagging and bombing the freeways, the interstates of California, strictly out for fame. Stealing paint, riding busses, scribing busses, fighting over letters — that’s the culture that I come from. That’s all I really knew about art.

Art was always very lustful to me. There was a lot of ego in art and there was a lot of pride. That’s what art has been to me since I was a kid, so as I transitioned into a contemporary artist, I kind of still have that “I don’t give a fuck” in me. Painting is my release. I’m sober. Painting has saved my life many, many times over. I’m still very free when I paint and I still only paint for myself. I’m still pretty much as raw as I was then, I just have a different audience now.

What has social media been like for you as an artist?
Four and half years ago I was painting out of my house and I was selling work. I was having random lawyers, people that collect, come to my house and get a painting. Then I sold seven paintings in one month on Instagram. I used that money to get my studio. [That] pretty much describes the power of accessibility of Instagram. Instagram kind of launched my career as an artist, because before then I [only] had a couple art shows here and there in the last 10, 15 years. 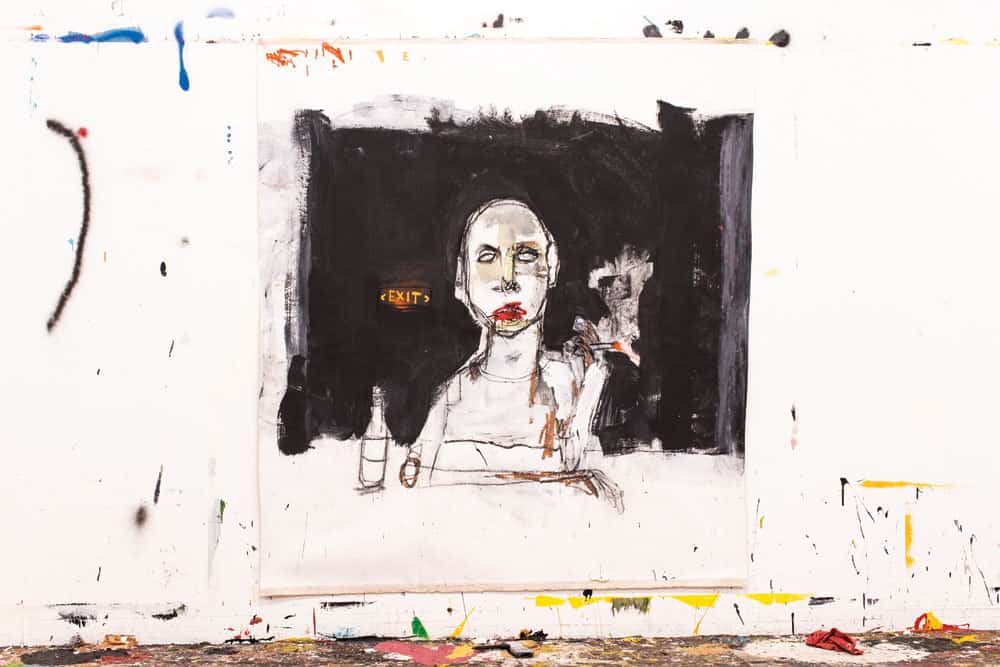 I know you get asked this a lot, but what was it like creating a mural for a jet?
I’d been waiting for that literally since I was 17 years old. I decided to use a spray can because I wanted to keep the aesthetic 100% righteous to how I grew up. I’ve been waiting to spray paint something high end like that literally my whole life so it was very very easy, it was something that was a joy for me. Just watching my international symbols of travel, bless that plane… it was a glorious moment for me because these same lines came through the derivative of graffiti, addiction, lust, greed, love and all of those things that I’ve struggled with. The culmination of my narrative.

Do you have any idea where the plane is now?
They decommissioned the plane. I know because they sent me a picture of the plane being wheeled out of the airport. I was commissioned it for Landmark Aviation, and they wanted it as their Art Basel piece. It was just gonna sit outside as the piece at their airport. Somebody bought it and I think turned it into a bar or turned it into a clubhouse, something like that.

I would really like to talk a little bit about your fashion career. You were designing streetwear at one point, correct?
Yes! I was doing streetwear. I was one of the first people to ever sell to Fred Segal. In the year 2000, I think. 2002-2004, right in there. I literally painted all my own clothes with spray paint as a young kid that was out of my mind. Rolling into Fred Segal and saying, “Hey you guys should look at my shit and buy my clothing line.” And they did. I was painting tons and tons of hoodies, blazers, I was hanging in Saks Fifth Avenue next to Libertine and Great Wall of China and all those really cool, high-end streetwear brands from back in the day. It was pretty cool.

Do you ever think you will get back into fashion?
I wouldn’t wanna do it myself. If there was a really cool collaboration with someone that had a great voice and we could create something that was for a purpose, then I’m always open for that. But as of now it’s all meant to be on canvas to me. I realized that after doing that for years… I’m a painter, whether it’s clothes or canvas. I’m always creating, that’s what I do.