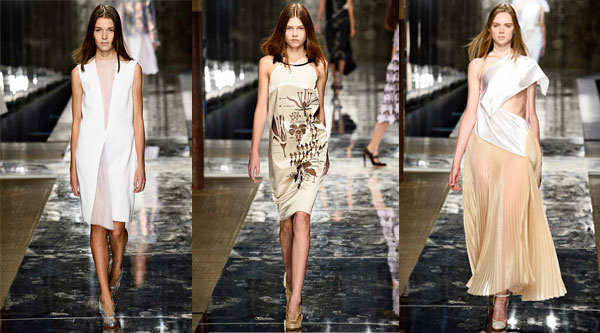 (LONDON) Christopher Kane
Just because a brand has been acquired by Kering, one of the largest fashion conglomerates in the world, doesn’t mean they have to go all commercial. And just because they announce they are opening their first retail shop today, doesn’t mean they’re heading down a more mainstream path. Christopher Kane has proved he can stay true to his aesthetic while making smart business choices for his brand. From scientific cutouts breaking down the anatomy of a flower, to raindrops falling down outfits (which are clearly appropriate for the London weather), Kane proves he’s still got it all going on. While flowers for spring are nothing new, this lab-apropos approach to flora removes the romanticism from the collection, instead dissecting the interior of the fauna and imposing it on floaty frocks, straight out of the chicest science textbook you’ve ever laid eyes on. The collection was not completely cut and dry: a few sequins as well as super sheer silhouettes made appearances as well. Other, subtler sentiments of blooms were found in the form of jewels playing with the shape of a dark suit, lifting the hem of a taupe silk dress, and encircling the neckline of a simple black frock.

Paul Smith
Neither announcing nor denouncing the practice of the skinny pant, Paul Smith did emphasize the power that trou can have. Whether executed as slim yellow leather crops, wide legged with bold front creases, or scrunched at the waist like a paper bag, these bottoms definitely stole the show. The tops were equally interesting, but didn’t pack quite the same punch. Silk button downs were followed by brightly colored thick knits. On the top front, there was one pink and white embroidered herringbone print in particular that really made its appearance known. And how could we leave out those blazers? While that denim patchwork piece with the huge lapels was a bit too bold, a more classic shape came in black, white, yellow and blue, all of which will do!

Erdem
By playing with just two colors, designer Erdem MoralioÄŸlu was able to infuse his collection with even more thought provoking concepts, without a mess of shades to get in the way. First things first: get thyself a lace moto jacket, stat, so long as it’s detailed in leather and flaunts angular zips. Secondly, you don’t need to be a girly girl to rock feathers, silk gowns or sexy sheer dresses; putting a tomboy spin on all of the above is way less expected. Also unexpected? Lace skinny pants, white button downs peeking out from sheer skirts. On the atmosphere front, a grand piano taking up a large stake of runway space is quite the move, too. Always a delight to see what Moralioglu has up his sleeve, season after season.

Roberto Cavalli Releases The Most Important Book Ever