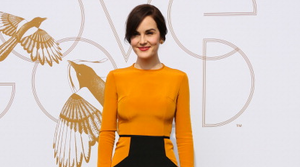 (NEW YORK) LoveGold Lunches With Michelle Dockery At The Chateau Marmont [DuJour]
The pre-Globes meal featured a lot of gold jewelry and some serious star power.

Who Had The Most Fun Prepping For The Golden Globes? [The Cut]
There was a lot of hair and makeup prep, including a shot of P Diddy de-puffing and Sofia Vergara eating chocolate cake.

Clare Waight Keller Talks The Beauty Of Paris [Telegraph]
The Chloé designer moved there three years ago, and loves the city for its flirty shop boys and toned-down glamour.

Everyone Has A DVF Wrap Dress Story, And They Shared It At The Designer’s LA Party This Weekend [ELLE]
The “Journey Of A Dress” exhibit celebrates 40 years of DVF.

Karl Lagerfeld Is Set To Debut An Eponymous Perfume in March [Styleite]
Which explains why he’s been uncharacteristically out of the public eye recently.

The Angel Ball’s Night Of Surprises (And...

The Angel Ball’s Night Of Surprises (And...

Sofia Vergara is Back in Donna Karan...