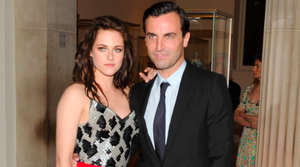 (NEW YORK) Kristen Stewart Tells Nicolas Ghesquiere She’d ‘Run Away With Him’ [NYMag.com]
The actress delivers an f-bomb laced interview to 032C magazine about her admiration for the designer

Would Anna Wintour Settle For A Safety Pin? [The New York Times]
Eric Wilson investigates the problems of dressing for this year’s Met Ball