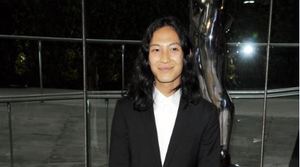 Alexander Wang Consulted A Psychic Before Agreeing To Take Over At Balenciaga (Fashionista)
Even a power nudge from Anna Wintour couldn’t bring the designer to a decision.

River Island Brings On Eudon Choi For It’s Latest Design Forum Initiative (Refinery29)
The LFW designer took inspiration all the way from the 90s for his collection with the high street shop.

Raf Simons Axed Jourdan Dunn From His Dior Couture Show Due To Her Ample Curves (Telegraph)
The 22 year-old model tweeted the unfortunate news from Paris one day before the show.

Nicole Kidman Is Announced As The New Face Of Jimmy Choo (Harper’s Bazaar UK)
Donning a red wig, the actress plays a sultry role in print and video ads.

The Ideal Montauk Afternoon With #DKNYARTWORKS