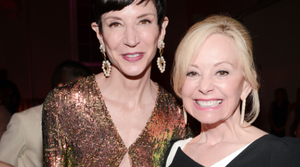 (NEW YORK) Lighthouse International’s “A Posh Affair” gala celebrated 40 years of fashion philanthropy last night with host Robert Verdi. The retail event featured designs from the likes of Chanel, Chloe, Dolce & Gabbana and Prada to Jimmy Choo, Judith Leiber, Gucci and Stella McCartney, to name just a few. Among those that were honored at the gala were philanthropist and fashion designer, Lorry Newhouse; founder and CEO of The RealReal, Julie Wainwright; Hope Gimbel Solinger whose mother was a founding member of Lighthouse International; and author, chef, and host, Alex Hitz. Wainright, who is the founder of the popular luxury designer resale site, which is known for verifying that its pieces are the real deal, was thrilled to be honored. “I am so pleased to be a part of this special evening and I am delighted to be honored alongside Lorry Newhouse, Alex Hitz and Hope Gimbel Solinger,” said Wainwright. “I am personally inspired by the work Lighthouse International does to fight vision loss.”

Those on hand to shop the wares of the visionary designers, were the likes of Muffie Potter Aston, Prince Dimitri of Yugoslavia, Arlene Dahl, Alexandra Lebenthal, Amy Fine Collins, Debbie Bancroft, Hamish Bowles and Dennis Basso to name a few. The fashionable affair took place uptown on 63rd and Park Ave., and the designer pieces sold to the chic set benefited non-profit, Lighthouse International. Stay tuned for next year’s gala to get in on brilliant combo of discounted designer garb and charitable outcome. Bright ideas on the charity circuit!