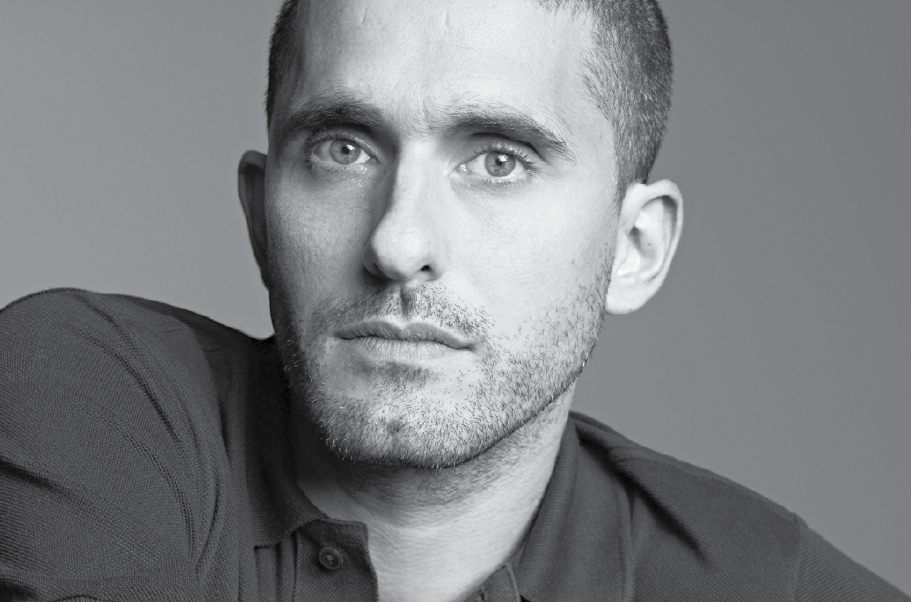 Swooning over Lacoste’s stylish collections? It’s Felipe Oliveira Baptista’s fault! His uncanny ability to tap into the brand’s rich heritage and reinvent it has brought the chic sportif French label to new heights. Plus! Did you know he keeps an alligator skeleton at home? For good luck!

You joined Lacoste five years ago?
Yes, and it’s been quite a journey. Joining a brand that’s so iconic and making it relevant for today is such a challenge. The brand is expanding and becoming more urban. It’s about clothing you can wear on a daily basis for an easy, active lifestyle.

What’s on tap for Fall 2015?
It’s winter tennis-inspired: big cable knits and 1930s long coats mixed with a 1970s tennis feel and a bit of The Royal Tenenbaums. We’ve looked at tennis [in collections] before, but funnily enough, it was always for the summer season. There’s an iconic color story, plus the technical, innovative features we’ve been developing for a few years: bonded garments and reversible pieces, for example.

How have you toyed around with Lacoste’s signature piqué polo?
We’ve done silk, nylon-cotton, leather bonded with jersey, and wool jersey piqué blends in past seasons—we’ve done lots of variations. When a brand owns such an iconic piece of clothing, it’s my job to keep it, but to always innovate. That’s what René Lacoste was all about.

Lacoste feels incredibly French, down to the casting. You’re not French, though…
Well, I’ve lived in France for 15 years, and my wife is French, so that helps! [Laughs] I’m deep in the culture. When I joined Lacoste in 2010, it was something I already knew from front to back. Lacoste is very French, but it’s very European, too.

Are there any collabs in the pipeline?
We’re working on two very exciting collaborations, but they’re not official yet. It’s such a fascinating dialogue to work with creative people who aren’t in fashion. One project will be out in July, and the other project is for 2016. One of the collaborations is all about innovation in materials. It’s quite interesting.

Do you get involved with Lacoste’s ad campaigns?
I work closely with the marketing team and advertising agency.
I have input about the choice of photographer and models, and I’m on most of the shoots. It’s a nice part of the process—like the last chapter when building a collection. It’s a really rich exchange.

Did you wear lots of Lacoste before becoming creative director?
I did! I had a few polos, and now I have many more. I got my first Lacoste polo when I was 8 years old. It’s definitely something I grew up with. It was familiar and emotional to pick up a job like this.

Do your kids don alligator-emblazoned threads?
Yes, they do! They’re very attached to the brand.

How widely are your runway collections distributed in Lacoste stores?
The runway collection is in a small selection of our stores—60 to 100 shops worldwide—and at a slightly higher price point. There’s more innovation in the choice of materials and construction in the runway pieces; it works as a sort of lab for the rest of our line.

What are some highlights of your Lacoste collections so far?
I liked my first collection [at Lacoste] very much—the excitement of doing things for the first time and seeing the response. The 80th anniversary collection [Spring 2013], with mini-racquet prints, was quite fun. Spring 2015 was one of my favorites as well.

Why did you halt your eponymous collection last year?
I put my line on hold after doing it for 10 years. It was a great project. It was actually very exciting to do both [Lacoste and a namesake line] at the same time. They’d feed off each other because of their differences. But it was becoming complicated to do both, so I decided to give it a rest for a while. I’d definitely do something again or in another form. There are lots of things I’d like to explore that I haven’t done before.

Do you want to dabble in couture again at some point?
Yes, for sure. With couture, it’s all about craftsmanship—anything is possible!

Lacoste has such deep tennis roots. Do you hit the courts?
Ha, no! Not at all. I’ve played a little bit but just as a joke among friends. I get lucky enough to see the French Open live; I always see the semi-finals and finals. I’ve gone through all of Lacoste’s archives, and I’ve looked at the history and evolution of tennis clothing—as a case study, not a sport that I play.

Athleisure is so haute these days; Lacoste has always been doing that, non?
It’s a great time for the brand! Never before has there been such a fusion among sports, fashion, and luxury.

Do you go back to your native turf of Portugal much?
All the time! It’s just a two-hour flight from Paris. I go four or five times a year for long weekends. I have lots of friends and family there, and it’s important for my kids to know the language. My friends from high school are mostly doing artistic things now, but they’re mainly architects and artists—I don’t know many people in fashion in Lisbon. I kind of like that when I’m there, I can forget about fashion.

What are your haunts when you’re in town for NYFW?
I always stay at the Bowery Hotel, and I try to check out whatever exhibitions are going on at museums as well as galleries in Chelsea. I also do a bit of shopping at secondhand stores. I like to come a few days before we start working on the show to do a bit of research—for the next season. My research always starts in New York, actually.

How do you unwind après-show?
I like to get a massage near my hotel, and I try to have a few hours of no people and no noise at all.

Given Lacoste’s signature embroidered gator, how do you feel about the reptiles?
I used to be quite afraid of them as a kid, but I’ve grown fond of them over time. The day before I started working at Lacoste, I bought a skeleton of an alligator’s head as a lucky charm!

Things To Discuss! Day 3 Of NYFW