Label To Watch: Koral Los Angeles, A New Denim Line By 7 For All Mankind Alums 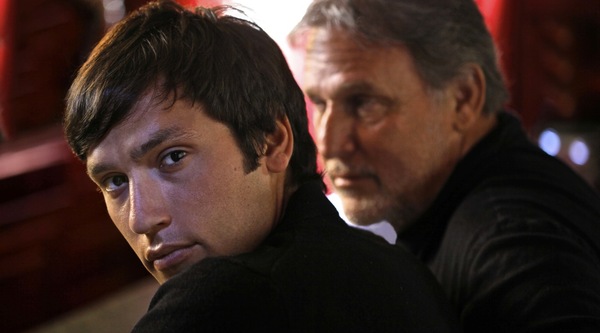 (NEW YORK) New premium denim line Koral Los Angeles is addled with some serious jeans cred: co-founders Peter Koral and Rick Crane are 7 for All Mankind alums, and Koral’s son, David Koral, is in on the dungaree action. The Daily chatted up the younger Koral for the full scoop on his family’s deep roots in the industry, his own forays into football and nightclub management, and why you’ll be coveting Koral pronto.
BY EDDIE ROCHE

What were you up to before getting into the denim fray, David?
I pursued a football career. My dad wanted me to do something that was completely the polar opposite [of the family business]. I was actually pretty talented as a quarterback! I broke all of the California state records. and I was recruited by a bunch of different schools. I bounced between a few schools, and finished at UCLA. Then, I played in the NFL for a couple of seasons, with the Colts and the Titans. After that, I wasn’t sure what to do with my life.

What’d you end up doing?
I traveled around the world, mainly Europe, and went to Paris, Milan, and St. Tropez. Then I came back to L.A. and ran a nightclub, Voyeur, on the edge of West Hollywood for a few years. It had an Eyes Wide Shut theme. It was pretty risqué! We had a topless license, so we’d have six to eight girls doing sexy acts, and a trapeze net, and girls with whips. I sold my shares about two years ago.

How was Koral Los Angeles born?
While I was doing the whole hospitality thing, I was like, “Dad, teach me the business. Let’s get back in there! You have all the contacts and relationships. Let’s make it happen!” After more than a year and a half of pestering him, he was like “alright, let’s do it!” I think he was getting a little bored of being retired. There are only so many days you can lay around on the beach. So we decided to launch the brand.

What were your childhood encounters with fashion like?
My family has been in the garment industry for nearly 100 years. I grew up in the business at a young age, doing anything from sweeping the floors to helping out in the design room.  I also helped out with production and shipping. I got to know the business’ nuances at a young age! I was always intrigued with fashion and how everything is produced.

How, exactly, does your fam have roots in the fashion biz?
My grandfather and grandmother on my dad’s side came from Israel before it was a country. My grandfather helped fight for Israeli independence. They eventually got out of there, moved to New York, and worked in the garment industry, doing sewing and commissioning dresses. After a year in New York, they moved to Los Angeles and opened a sewing facility, with around 100 employees. My grandmother was an amazing seamstress! The business expanded, my dad became more entrepreneurial, and he partnered and my grandfather started a new business, El Koral. The company manufactured for private labels, like Calvin Klein and Nike. They also had the label Hang Ten for a moment.

How did 7 for All Mankind come about?
My dad produced all things knit and woven, so he was figured, “Why not produce denim?” So he gave it a go and took a big risk. It was 2000, and the garment industry in general wasn’t doing very well. So he launched 7 for all Mankind. It was a huge overnight success; it pretty much revolutionized the denim industry. The rest is history in terms of how it allowed consumers to buy a pair of jeans costing more than $100. It paved the way for all of the other brands you see out there today, from AG to Rock & Republic. Then, they sold the business to Bear Stearns. My father had a lawsuit with his old partner; a couple of weeks later the sale went through…a few years after that, they sold to VF. My father retired, got out of the business and sold El Koral to his old partners.

What do your football friends think of your new career in fashion?
I was always the guy on the team making sure my socks were in order! I always cared about looking good, so I guess it wasn’t too much of a shock. But obviously, they give me some sh*t considering what they’re doing.

Where can we find Koral on shelves?
We’ve only been shipping for eight months. We’re an international brand overnight, and we have a really great distribution. For example, we’re selling to stores in the U.K., like Harvey Nichols, Selfridges, and Harrods, and then Teresa’s in Germany. In L.A. we sell to Elyse Walker, American Rag, Theodore, and Ron Herman.

Do you design the jeans yourself?
I’m not a full-blown designer. I like to bring a lot of references to our designers and talk to them about Koral’s aesthetic.

Has the Seven for All Mankind cred helped Koral get picked up?
The product speaks for itself, but we also have the credibility that lets retailers know we’re going to deliver on time. People know who we are and they know the family. I think it’s refreshing for buyers to see a new brand out there from people of our experience.

How is Koral different than, say, Levi’s? Or the plethora of denim brands on shelves?
First off, we do everything with integrity and quality! We pick the nicest fabrics possible, from Japan, Italy, the U.S. and some Turkish denim. The essence of what we do is firstly our fabrics, and then, our fit, which is second to none. We have our concept, “lived in length”—our jeans age naturally, in one, two, and four month variations. This element alone sets us apart from the rest of the marketplace.

How so?
We have the best pattern maker in the business. His name is Norbert and he’s a 70-year-old pattern maker. He invented the three-piece waist band: it hugs the hips, and lifts and separates the ass. He calls it a ‘wonder butt’!

Why did you launch with women’s first?
I wanted the first launch to be only a men’s line. But my dad, with his experience, convinced me that you have to hook the women first. Once you’ve hooked the women, they’ll go buy them for their men. Men are very loyal to brands. If a brand fits and they like the brand, they’re going to buy it for the rest of their life. In order to get them to try something else, you really have to have their women get a new pair of jeans on them.

What is it like working with your dad?
Obviously there are challenges, but it’s really enjoyable. My grandfather worked with my dad—now I’m working with my dad in the same office. I learn a lot through his decisions on a day-to-day basis. Of course, I try to get my influence in there, by knowing what’s relevant today. We’re a great combination!

What’s the 10-year plan for Koral?
We don’t think that long term in the garment industry! But I definitely want to keep rolling out Koral. I’m looking forward to launching men’s. From there, we want to transform Koral into more than just a denim brand, by doing other categories, creating a retail component. We’ll also hopefully launch our own e-commerce in September. Eventually, we want the brand to become a real player in the fashion industry.

Did running a nightclub teach you anything applicable to your current gig?
Managing people! At a nightclub you have be on your toes at any given time. In this business, there are so many different aspects, you have to make decisions on the fly, run with them, and be confident that you made the right choices. The same goes for being a quarterback!

Do you think you’ll ever have a nightclub again?
Maybe one day. I think it was just something I had to go through.

Was TMZ around in those days?
Yes, quite a bit. All those guys were out there, every day. We had everyone coming to the club at one point!

Who were your favorite VIP guests?
Joe Pesci came in one night, and he was pretty damn funny. He’s a character! I never really get star struck because I’m from L.A. and I grew up with celebrities around me, but when Johnny Depp came in one night, I felt a little uncomfortable even talking to the guy. That was pretty cool.

Wiig-ing Out Over 'Girl Most Likely'