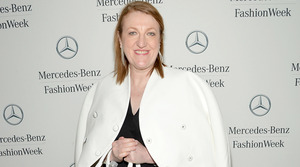 When celebration is in order, a blizzard is no match for Ruffian designers Brian Wolk and Claude Morais. This week, they hit the Bar d’O reunion at Indochine.

“There are very few restaurants in Manhattan that continue to command a level of chicness and elite clientele for over two and a half decades. At 25 years old, Indochine is not only a New York standard, it’s an institution.  Our friend and proprietor Jean Marc Houmard is not only responsible for this fashionable sanctuary, but also for Republic, Kittichai, Bond Street, and the notoriously celebrated but no longer open Bar d’O.  On Sunday December 26, the day of the blizzard, we received an invitation to join Jean Marc for the Bar d’O reunion dinner at Indochine. For those of you fashion scene newbians, it was a cozy and delightful West Village bar that launched the careers of some of the most illustrious drag Burlesque performers including Sherry Vine, Raven O and the legendary Joey Arias, who starred most recently in Cirque de Soleil’s Las Vegas hit Zumanity.

We arrived at 9:00 p.m. through snow up to our knees, and were delighted to see a packed house. Jean Marc ushered us to his booth, and after a dinner of our favorites including fried spring rolls, Vietnamese baby back ribs, and crispy shrimp, we were called to attention by the one and only Ms. Flotilla Debarge. Unlike other Burlesque and drag bars, Bar d’O featured performers who could sing their lungs out, no lip-syncing here. Next up was Arias, whose extraordinary voice recalls that of Billie Holiday. We were delighted to hear some of our favorite jazz standards, including “God Bless the Child” and Cole Porter’s “Love for Sale.”  Sade Pendarvis, back on the scene after a life-saving liver transplant, was actually featured in the groundbreaking documentary, Paris is Burning. Sade’s rendition of “At this Moment” brought her to her knees and the crowd to their feet! Flotilla’s own version of  “You Make Me Feel Like an African American Woman” was a brilliant post-modern and post-gender take on this classic hit.  A million lychee martinis later (our favorite Indochine cocktail!), a bevy of desserts were brought to our table including dessert wontons (to die for). It was truly a special New York evening, and it was clear that the blizzard really brought this diverse and beautiful crowd together. After an anonymous patron bought the entire restaurant shots, we all danced to Arias’ last song, “Why Don’t You Do Right?”.

For all of you who want to take part in the Bar d’O reunion fun, you can, but not until next year. It is always the Sunday before and after Christmas at Indochine. Mark your calendars!”

p>Check out photos from the event in our Gallery.