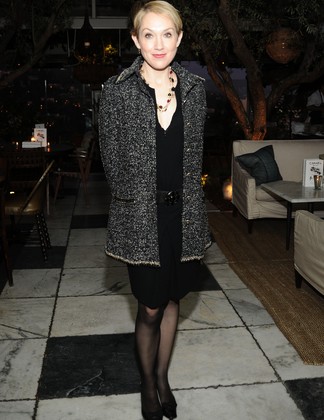 (NEW YORK) Time for a NYFW encore, darlings! Because you simply can’t get enough of our dish-filled Media Issue. Harper’s Bazaar UK’s new top chick is an old-school English journo with a twist of the Parisienne, A nimble wordsmith, she wrote the 2011 must-read, Chanel: Her Life, blogs for fun, sips tea by the bucket load, adores Diana V., and knows her fashion history cold. She wants to bring back long-form fiction and doesn’t care how fat you are. Heed her siren call!
BY SARAH HORNE GROSE

We hear you wore Chanel to your wedding over the summer. First off, congrats. Now tell us everything.
It was the most beautiful dress. I had in mind a classic, ’30s-era look. The early ’30s were such an interesting era. Then, as now, it was a post-crash time. I had seen a short dress in the Chanel cruise collection that was inspired by the Hôtel du Cap, which was just perfect, and reminded me of my heroes, like F. Scott Fitzgerald, so I asked if Chanel could do something long. I wanted to wear a long dress, but not one that was inappropriately girly, because, well, I’m a grown up. We did a fitting in Paris and it was just the most magical moment. I felt incredibly happy and lucky on my wedding day.

Your went with a dreamy Sienna Miller for your first cover. Discuss!
January always feels like a new start, so it was appropriate that that was my first issue. Sienna is wearing Chloé and it feels very timeless, but still very fresh and light. It was a good indicator of what I hope to do with the magazine. A good magazine should be aspirational, yes, but so many magazines have that voice telling you you’re not thin enough or rich enough. My hope was that it could be beautiful, and adult, and have stories that didn’t tell you you aren’t this or that. Storytelling is incredibly important to me.
And you also brought back Diana Vreeland’s “Why Don’t We…?” feature.
I thought back to those years when Diana Vreeland and Carmel Snow and Alexey Brodovitch were at Bazaar. It was a magazine that was so creative and visual, but with real literary ambitions. Vreeland was also very playful and audacious. I think people took her too seriously. “Why Don’t We…?” was just a way of saying there is something magical in the everyday.
What else do you have up your sleeve?
As a writer I have empathy and sympathy for writers and I’m keen on reintroducing fiction. Harper’s Bazaar ran works by Virginia Woolf and Evelyn Waugh and Truman Capote. And the March issue also has the first fashion story we’ve ever had by Carine Roitfeld [Bazaar’s new-ish Global Fashion Director.]
Tell us about some of the other new talent you’ve drafted.

There’s a photographer called Cathleen Naundorf who took the most wonderful photos of Valentino’s home in France. And we have a story by Tanya Gold, and a real investigative piece by Hannah Rothschild.
You have a uniform of sorts. Is it always stripes?

I do have a uniform. I wear Gap or Uniqlo jeans, often with a striped top or a silk top from Equipment and Chanel pumps. I wear jackets I’ve had for 15 years to pull it all together. I did two years of publicity for my books and you’re always in some little bookshop and people are expecting you to look polished and presentable, so I feel no more pressure now than I did with all that flying about for the book.
How’s your relationship with Glenda?
I have a good working relationship with her. I was her first features editor at Marie Claire and we’re both Brits so maybe there’s a shared sensibility there.
Do Americans run magazines differently?

I’m not sure. I worked in New York in the ’80s for the Sunday Telegraph. Obviously there’s a lot of cross-pollination. Think about it: Anna Wintour, Grace Coddington, Glenda Bailey—all British. So it’s hard to say if what they’re doing is British, or American, isn’t it?

What do you do when you’re not wading through the Bazaar archives?
I’ve got a garden at my house in Scotland, up in the Highlands, and I love walking there. I just flew back from Scotland last night, actually, as I’m often there on the weekends. And I have two sons who are 23 and 18. One of them is in a band called the Bombay Bicycle Club, so I am something of a rock mom, going to see his shows.

How is writing a biography or a novel different than editing a magazine?
I’ve been a journalist since I was in my twenties so I’ve never lived in that ivory tower, just gazing out the window and writing books. With the Chanel book it was almost like a magazine in that it was very visual. I didn’t think the readers would be happy with a mean little plate section in the middle somewhere. I’ve always been driven by that mix of words and pictures.