KT Auleta On Her Lily McMenamy Video For Walter Martin 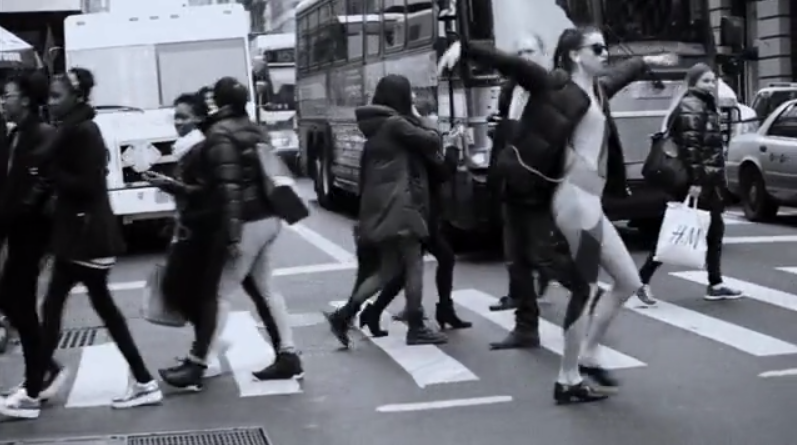 Lily McMenamy in Walter Martin's "We Like the Zoo". Directed by KT Auleta.

Remember that darling video of Lily McMenamy wildly dancing through the streets of New York? The music video for Walter Martin of The Walkmen’s debut single as a solo artist “We Like the Zoo” features the model showing off her moves to strangers in the street as she dances around while listening to the song on her iPhone. We caught up with director and fashion photographer KT Auleta to find out how it all came about. Turns out, Martin’s wife is Glamour style director Melissa Ventosa Martin, who also happens to be a friend of Auleta’s. One fashionable dinner party had Auleta and McMenamy sitting next to each other, and the rest was history.
PAIGE REDDINGER

How did you come up with the idea for the video?
Lily and I came up with this idea a year ago at a dinner party and she was like, “Let’s make a movie! I just want to dance with people on the street.” Then, of course, the discussion lingered for about a year.

How did it end up being part of The Walkmen’s Walter Martin’s solo album?
My friend Melissa Ventosa Martin over at Glamour showed her husband my work and he said that he wanted me to work with me. I told him about this idea that had been kicking around for a year and he loved it. It was kind of just this marriage of all of these ideas. Then, of course, we had to find the right time to do it. It rained and we had to reschedule, but it finally came together and was amazing. It had been a long winter and it was still kind of chilly out when we shot it, so she was freezing!

Lily has some serious dance moves. Where did she pick those up?
She is an amazing dancer. She has been doing yoga since she was a little girl and has the most amazing flexibility. She is so confident and smart! She had the idea and I don’t know how she got it, but I guess she was doing research and all of the sudden she sent me this photograph from a book. It was about spontaneous dance and movement with people being in love.

Strangers join her dancing in the video. Were any passerby actually put off by the idea?
It was really a social experiment. In SoHo, out of all the places, people really didn’t want to dance with her. People were saying the weirdest things. Thank God she had her earphones in! She was really putting herself on the line. One really handsome guy was like, “She should wear a G-string!” and I was like, “Ew. Why are you thinking about a G-string instead of just enjoying it?” SoHo was definitely the hardest place!

Where was the easiest place to shoot?
We shot a lot in Chinatown where there were a lot of bus stations and I think that there were a lot of tourists that were just like, “Wow, crazy New Yorkers!” These aren’t the kind of tourists you find in SoHo, these were the more bus station kind of tourists. When we went to Times Square, we didn’t know exactly what to do, but we drove in a car with music blasting. People were taking pictures of her and  going crazy, so people really liked it there and she liked it too. We actually got pulled over, the cops were concerned about security with the loud music. She was sticking out of the car dancing with these big cameras,  filming herself. These cops just walked out with their hands on their hips like, “Are you kidding me, girl?”

How did you shoot it?
We shot it with a steadicam in Washington Square and then I would follow her. All of the really shaky shots are from me, because I get so excited. What is crazy is that I think I got more footage of people dancing with her, because I’m so spastic. I went crazy just chasing her around. It is so fulfilling to watch her try so hard and not give up, going from next person to the next person. And then someone would all of the sudden dance with her, and I tried to capture that moment.

Any favorite moments from the video?
There was this guy with a bizarre purple sweatshirt on and she is dancing with him and he goes a little crazy and he was one of the only people after being there for an hour and a half to dance with her. She thanked him after and you see her say thank you. I kept that in, because she was so appreciative and it is such an exchange of trust and she is the one that started it and laid it all out. I saw something in The New York Times, where someone took an Instagram of Lily dancing on a table and then I guess the cops came in and I thought, “Oh, there she goes again, dancing!” She is just fantastic and so brave and that’s why it was such an amazing collaboration. She texted me to say, “Thank you for making this possible and letting my dreams come true,” or something along those lines. I was happy to give her that platform and she gives us all the enjoyment of it.

Do you enjoy directing and video work more than still photography?
I love both, but I have to say a project like the one that I did with Lily is one of the best times that I had on a shoot. I was just running around on the streets, and I love being in that moment. I did a little short film a couple of years ago and it was the first film that I had ever made. It was right on the cusp of fashion doing film, so I really got into it right away. Now I feel like the projects are…I wouldn’t say artsy, but they are less straight-ahead fashion. There is context behind them. There is a performance behind the clothes. But I think that more and more I am getting into personalities.