Kloss Is In Session! 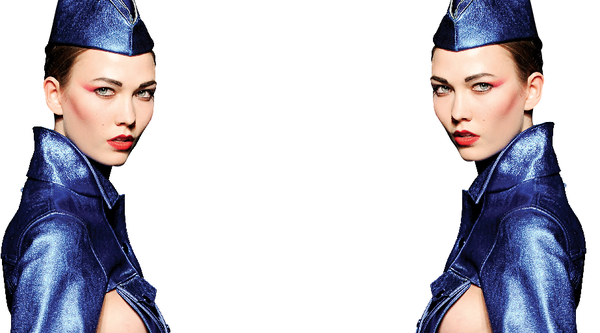 (NEW YORK) At the ripe old age of 20, the Midwest’s sexiest export has a stack of European contracts, her very own cookie line, the haircut of the year, and a deal with Mercedes-Benz. Did we mention she wants to go to Harvard?
BY EDDIE ROCHE

How was Berlin Fashion Week, Karlie?
It was a whirlwind adventure. It was covered in snow, but I actually got to enjoy watching a show for once. It was nice being on the other side of the chaos!

What show did you see?
I saw a young designer, Degree Fahrenheit. It gave me a whole new perspective on things. Now that I’ve been in the audience, I’m much more aware. You can see how many times the person on the runway is blinking and even breathing! When you’re actually on the runway, you sort of shut everything out. You don’t think about anyone because it would be overwhelming to actually know who’s watching. I’m going to be a lot more self-aware on the runway now.

You’d never been to a show before?
No, that was the first time.

Really?
Unless you count my high school fashion show! [Laughs]. But even then I don’t think I got a front-row seat.

How many seasons have you been walking now?
I’d have to count. I’ve completely lost track. This is my fifteenth? I’m not sure. I know it’s a lot, and that I’m going into this season as a seasoned veteran. [Laughs] It’s my favorite time of the year, and when I get to see everyone. That’s what’s so special about shows.

The last time we spoke, for The Daily Berlin, it got picked up around the world because you said you wanted to go to Harvard. Why do you think people were so curious about that?
Transitioning from a fashion career into college isn’t always the norm, so that’s something slightly different about me. I don’t know why it got picked up like it did, though. Now I feel pressure to start cramming for the SATs. I even bought an SAT prep book. You should help me study!

Sure. Do you usually read what people write about you?
To be honest, I don’t. I’m not very tech-savvy in the first place, and I’m slow to reply to emails. Every once in a while, I do see what’s out there, but 90 percent of it probably goes right by me, both good and bad, which is probably for the better. I just stick to doing what I’m good at and try to avoid the noise.

Your haircut has been getting a lot of press lately. The Times called it the cut of the year!
It’s kind of unbelievable. I’m not sure how it became such a phenomenon, but I’m excited that it’s inspired other women to feel empowered enough to make the chop. I feel like I’m in good company. I saw recently that Michelle Obama has a similar sort of ‘do. I’ve seen a lot of people recently doing a new cut for the New Year, and it’s really empowering and an honor to have that sort of recognition for my cut. I was in a coffee shop yesterday and I heard this group of girls talking about “the chop.” They didn’t realize that I was totally eavesdropping on their conversation.

You may be too young, but do you remember Jennifer Aniston’s “The Rachel” from Friends?
Of course! Come on!

Are you going to get your hair insured?
I probably should, knowing how brutal it is during the shows. But it feels really healthy right now since I cut it and haven’t had any real damage. So maybe this is actually the time to get it insured!

Thoughts on your pal Jason Wu designing for the First Lady again?
I’m so proud of him. The career he’s had in such a short amount of time is incredible. It’s truly just the beginning, but to have the recognition and validation of someone like Michelle Obama is huge. He’s going to be around for a very long time, but the fact that he did the two consecutive [inaugural ball] dresses will go down in history.

The photos of you two together are always adorable.
We’re the ultimate duo. He’s the one who puts me in heels and makes me even taller. It’s his fault!

When did you do the Vogue shoot on Staten Island with Annie Leibovitz?
We shot it in December, long after Hurricane Sandy. It was incredible and an honor to meet the first responders. It was so humbling. And the chance to interact with them is is not something that I would have had the opportunity to do otherwise.

Did you think it might be controversial at the time?
The story itself and the photographs are, in my opinion, a tribute to these incredible heroes and pays respect to them. It was an honor to be a part of it, because it was celebrating all of their incredible work.

Are there any legendary photographers left that you haven’t worked with?
I would have loved to work with Helmut Newton, Richard Avedon, and Irving Penn. I was born in the wrong era! I wish that I was born a little bit earlier and had the chance to work with the greats.

Are you an old soul?
Entirely. I miss the film days. I was sort of on the tail end of film. I’ve worked with Paolo Roversi, who still uses quite a bit of film when he can get his hands on it. I’m old-fashioned in many ways, especially when it comes to fashion. I’m very nostalgic. There are so many incredible eras in fashion; the ’90s, the ’70s, the Halston era, the grunge era, and the ’60s in London. I don’t know, I wish I had a time machine so that I could experience each one of them. But the thing is, the world is also incredibly interesting right now, just in an entirely different way.