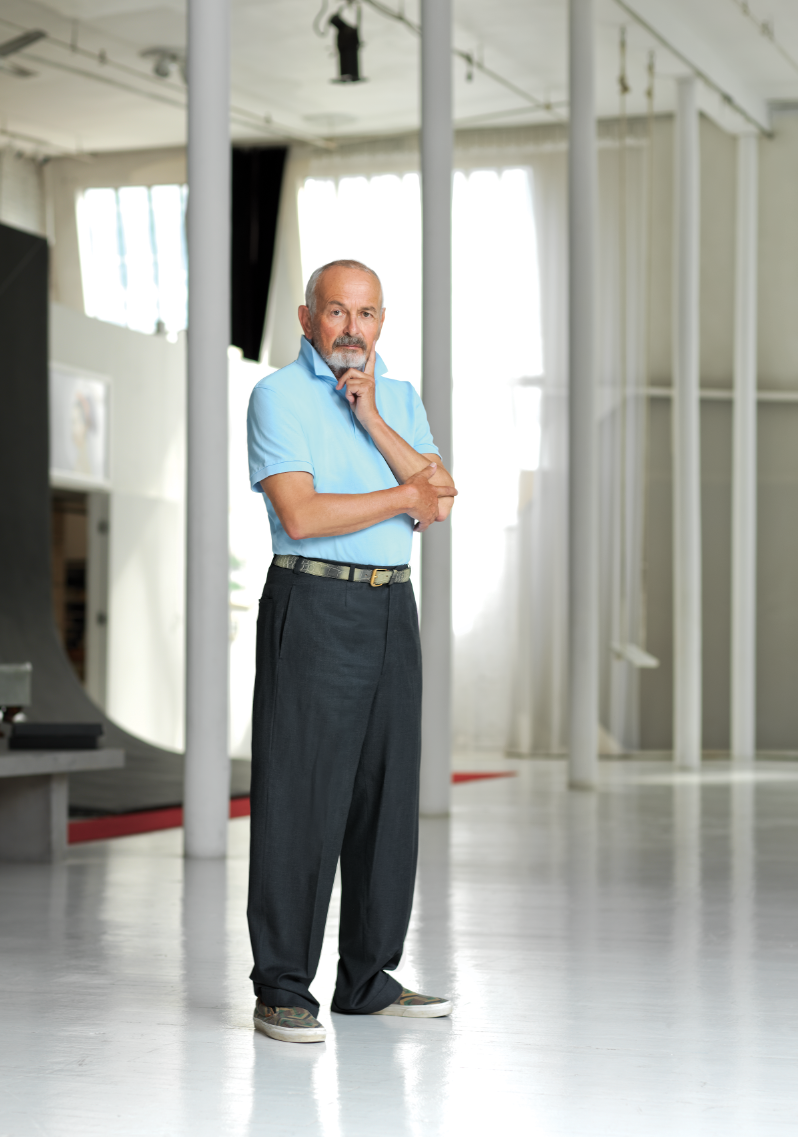 Legendary lensman Arthur Elgort pulled fashion photography out of the studio and into the streets, where it’s stayed ever since. Looking back on his singular career, he talks Anna, Ansel, and his new pal, Joe Zee.
BY CHRISTOPHER TENNANT

You’ve published a number of books over the years. What’s the idea behind your latest one?
It’s my whole career, really. It goes back over 40 years. There are pictures in there from when I first began photography, and I’m still doing it. Isn’t that something?

How did you get into photography?
I started out as a painter. I was a good painter, but not a great painter. I was working as a waiter at Freddie’s 411 and my nails were dirty all the time. They’d say, “Why are your nails dirty?” And I’d say, “Because I’m painting all the time.” I did the best I could to clean them, but you could still see the paint. And then I got a Polaroid camera. I liked that better because I could do girls with that, and that was more fun than just painting by myself all the time. I was lonely. I was in school at Hunter College, and there were only three or four boys in my class. The rest were all girls! So you’d go down to the cafeteria and you’d have your pick of models. That’s how I started practicing.

So it was initially to pick up chicks?
No, no, no. I mean, that part wasn’t bad. I certainly didn’t mind it. But I still had my waiter’s job so I could make money. I had a box of the tips and I’d save up so I could buy cameras.

What gave you the idea to start shooting fashion?
I don’t know. It seemed like a good idea, I guess. Maybe because I thought there was more money in it and I didn’t want to be a waiter for the rest of my life.

Do you remember your first gig?
Yes, it was with Clive Barnes, who was a writer about ballet, and I was interested in ballet. That’s where I began. I shot the dancers and then had a show at Carnegie Hall. They kinda liked me, and they saw my prints and said, “Could we put ’em on the wall?” I said, sure, and then I went home and printed them. That was my first show. I must have been 25. I was still making a lot of money as a waiter, though.

What kind of place was Freddy’s 411?
It was sort of a gay restaurant, and I got the job because I knew somebody at another job and they sent me there. I remember when I called I could hear the voice on the phone and the guy said, “Helloooo! Come down so we can look you over.” The guy was very nice. He liked straight guys as waiters ’cause he didn’t want trouble with the clientele. I remember the famous person who used to come in all the time was Mel Brooks, who would come in with his wife [Anne Bancroft], the actress. It was on Bleecker Street, near where Marc Jacobs is now.

How did you get from Carnegie Hall to Vogue?
I met this girl who didn’t have anything to do, and she took my pictures around and showed them to certain people. All of a sudden I got jobs!

Who was your first big client?
I started with Mademoiselle. Roger Schoening was the art director and right away he gave me a job—twelve pages and a cover. That’s where I began, and where I felt I belonged.

You were cocky.
Yeah, a little bit. After Mademoiselle, I worked for British Vogue, then Italian Vogue. I didn’t work for American Vogue until later.

What was it like to work with European magazines back then?
It was very easy. You picked the models. I would get a ticket for three weeks at a time and go to Italy and England. At the time there weren’t that many photographers doing street work. They were doing it in the studio more with flashes. I was always outside. There was Saul Leiter and one or two others, but they didn’t like to work too much. I was hungrier at the time.

So you get your big break. Then what happens?
It stayed more or less the same. That’s why the book is so important, because my work has never changed that much, except sometimes the editor changes it a little. Grace Coddington, for example, she likes full body and likes the scenery. There’s another one who likes to crop all the time, so I just remember that, which isn’t too hard.

Why do you think you’ve had such a long career?
I was lucky. And fast, also. I don’t waste time. I also got along with everybody. A lot of people I knew didn’t get along with anybody. They were a pain in the neck. I used to like to pick the girls, but sometimes they’d say, “Can you shoot this girl even though you don’t like her?” And I’d say, “Bring her on and I’ll figure her out!”

What’s been the biggest change since you started shooting?
They give you less time, that’s for sure. So if you’re fast, that’s good. Everybody’s gotta go, go, go. They gotta get a plane or something like that. Nowadays there’s more people, but we usually don’t need them. There’s a nail person and a hair person and all these other people. The only thing good about it is that I can sleep longer. We’re lucky if the model’s ready by noon!

Who’s your favorite young photographer?
I don’t know what’s young anymore. I like Steven Meisel. How old is he?

Fifties?
So he’s young. And he’s good. I think he’s the best one around right now.

Your son, Ansel, has had quite the year. What’s it been like to see him become a celebrity?
It’s been great. He always wanted to be a star since I can remember. I wasn’t sure it was gonna happen.

Was he around on set?
Oh, yeah. He’s in all my books, as is his brother, Warren. They’re the boys that Grace liked because I didn’t have to bring anything to the shoot but me. They’d stay in my room, or close to my room, and they knew what to do. She’d ask Ansel, “What would you like to do for this next shot?” And he’d say, “I’d like to take a cup of tea, please.” That’s why he’s so good at film. He’s used to it. He’s also a good singer and a good dancer. Maybe I’ll see him tonight because we’re going to Bill Cunningham’s thing at the 92nd Street Y.

Have you been going to a lot of screenings?
A little bit. Not too much. Ansel doesn’t make me go; my wife does. We have to go to Toronto because he’s in a new film that opens there. I’d like to not go but my wife says, “You have to—that’s your son!”

Do his fans ever e-mail you?
They try to, but I’m not allowed to talk to them. Sometimes they come over—the models—and Ansel will be here and he’ll say, “Dad, I wanna meet that model.” They’re the same age.

He’s got the hookup.
It’s true. But it works both ways. I have to be nice to him because he gets me jobs, too! Who knows? It might even win an Academy Award. You seen The Fault in Our Stars?

I haven’t yet, no.
Most people haven’t, but I’ll tell you the truth: It’s a good movie. I’d say that even if I didn’t have to.

Your daughter, Sophie, just got married. How was the wedding?
Perfect. Ansel sang a song. He has a beautiful voice. He doesn’t think about it, he just does. He went to LaGuardia [High School], and he was the star in all the plays.

Who are you shooting for these days, by the way?
I just started working for Joe Zee. That’s a new magazine, Yahoo Style. So now all of a sudden Joe Zee has me doing a lot of things. I don’t know why, but Anna [Wintour] is sick of me. I look at the magazine and think, I could beat this easily. Maybe she thinks I did too much? I don’t know. Maybe I’ll write her a letter.

Maybe she’ll read this in The Daily.
Maybe!

Would you like Anna to call you?
Yeah, you should include that in the article. Maybe she feels I’m too old? I don’t know, so I stay out of it and do Joe Zee’s stuff instead. You don’t want to work with somebody who doesn’t want you, ya know?

I have a feeling she’ll be back.
Probably. Whether I’ll be back is another question. Who knows, though, right?