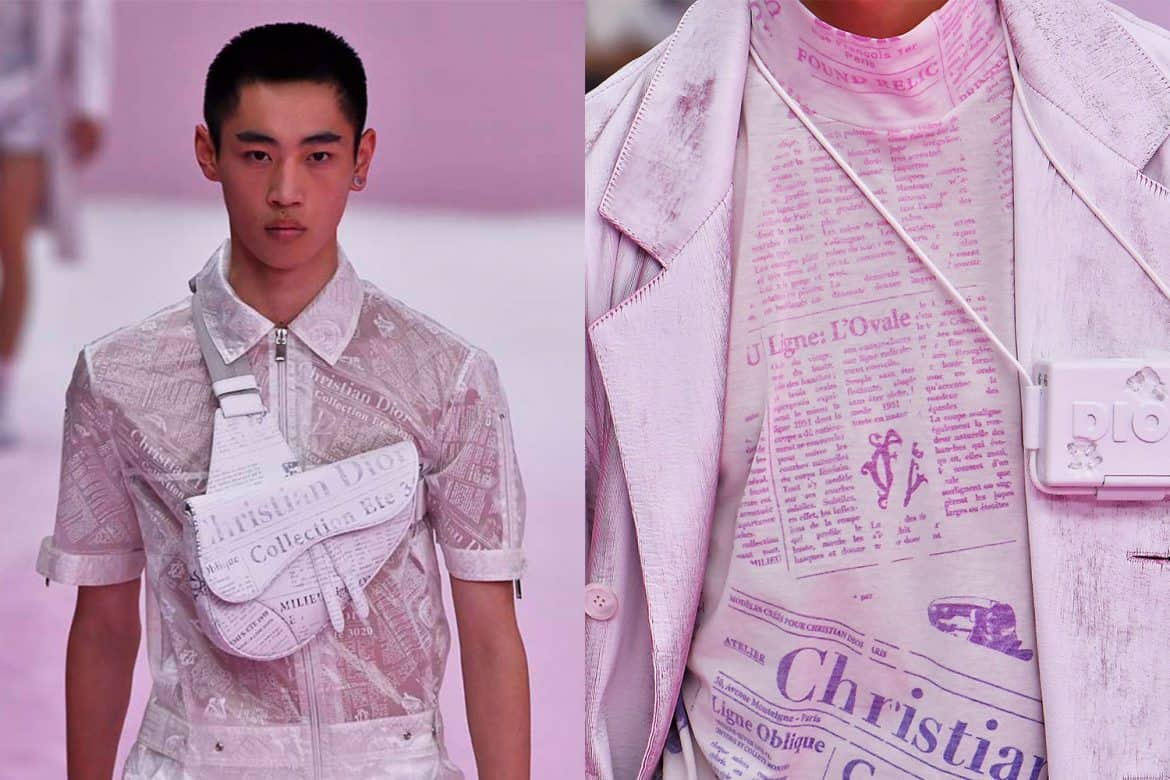 Remember Galliano’s newspaper print collection for Dior? Of course you do. It’s iconic. If for no other reason than that Carrie Bradshaw wore a dress from that collection when she went to force an apology on Natasha for shtupping Big in Natasha’s bed and then running away, causing Natasha to fall and mess up her teeth. God, Carrie was just the absolute worst, right!?!? Like, leave the Natasha alone already! Stop trying to make her talk to you. She doesn’t owe you anything. Just go away! 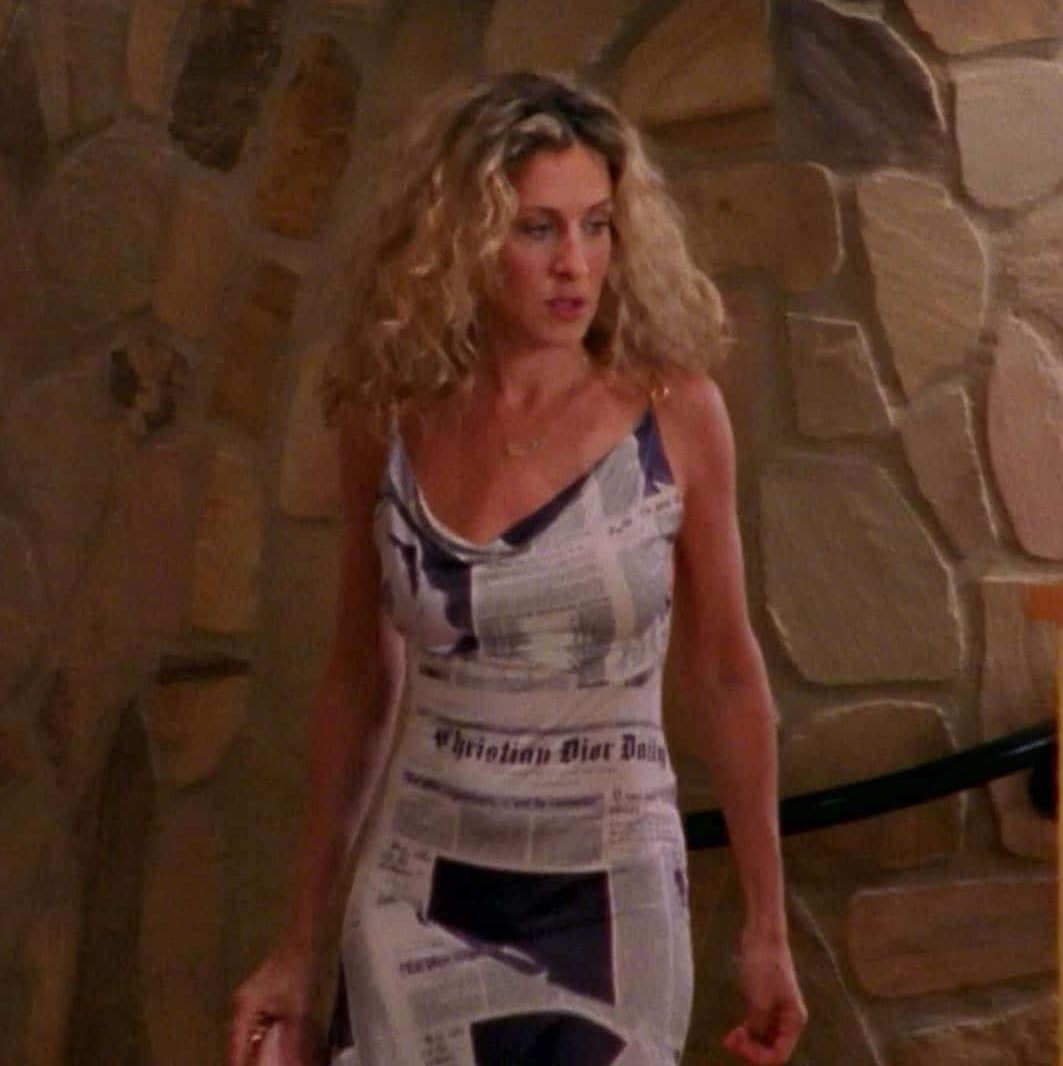 Sex and the City (HBO)

Anyway, I can’t remember what season Galliano designed that print for and, honestly, I’m too lazy to look it up now, but I do remember watching an episode of Fashion Television (or Video Fashion… or Fashion File) at the time where they spoke to Galliano about his inspiration for the collection and he said something along the lines of “I was inspired by the homeless who wrap themselves in newspapers for warmth.” Good lord! Could that man put his foot in his mouth or what!?!?

Galliano caught some heat in the press for his comment, but this being a pre-social media world, the whole thing blew over fairly quickly. And although Galliano continued to utilize another version of the newspaper print in the designs for his own eponymous line for years (long, long after it went stale), it never reemerged at Dior. At least, I don’t think it did. Maybe I’m forgetting something. I’m sure someone will roast me in the comments if I’ve got this wrong, but whatever.

The point is, that iconic and controversial print is now back at the house of Dior thanks to designer Kim Jones, who resurrected it for his Spring 2020 menswear collection. Of course, Jones gave the motif a much-needed update — muting the color pallet and removing Galliano’s face from the equation altogether. Jones’ use of the print in white on sheer fabric felt especially fresh and was almost enough to make me forget it’s callous origin story. 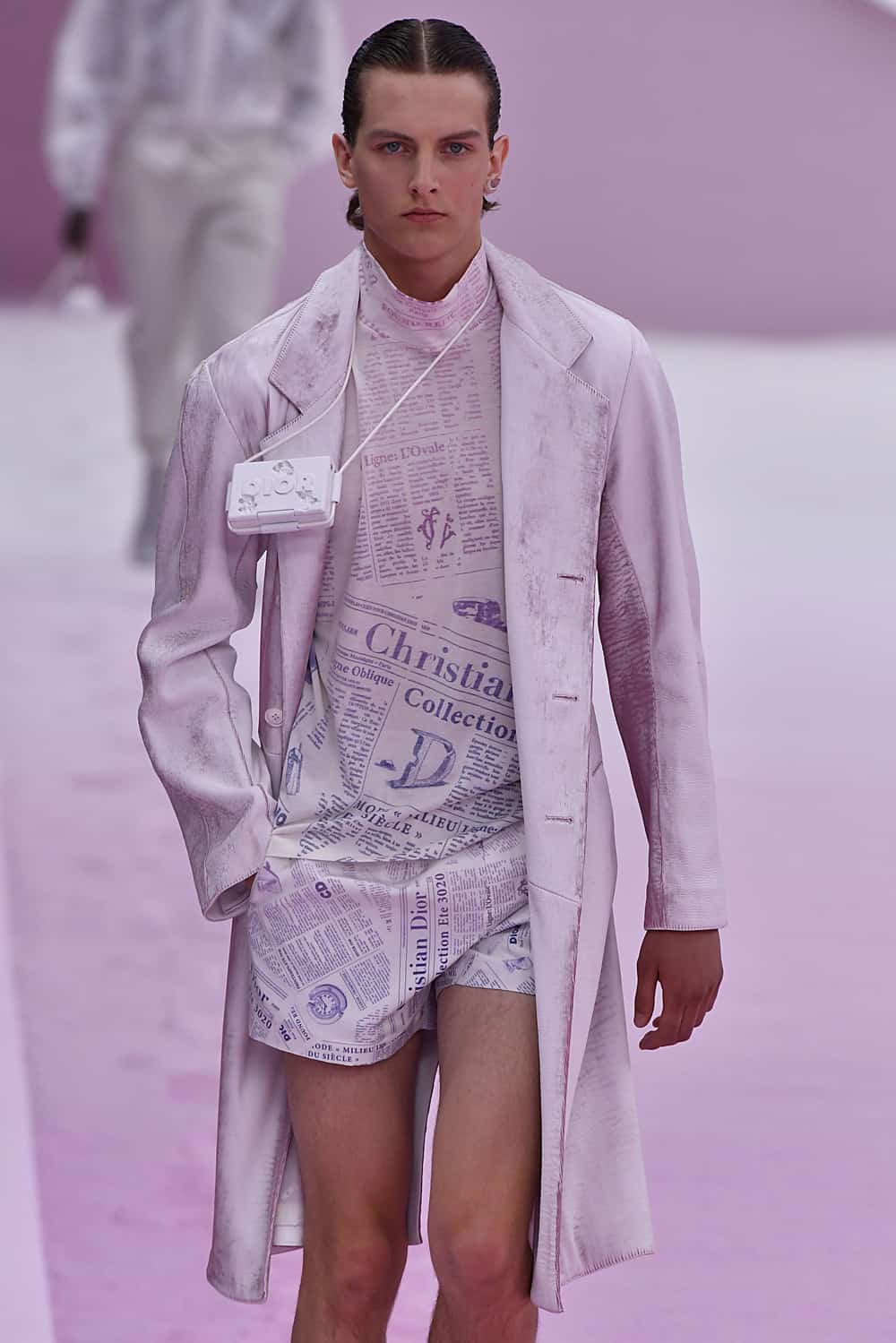 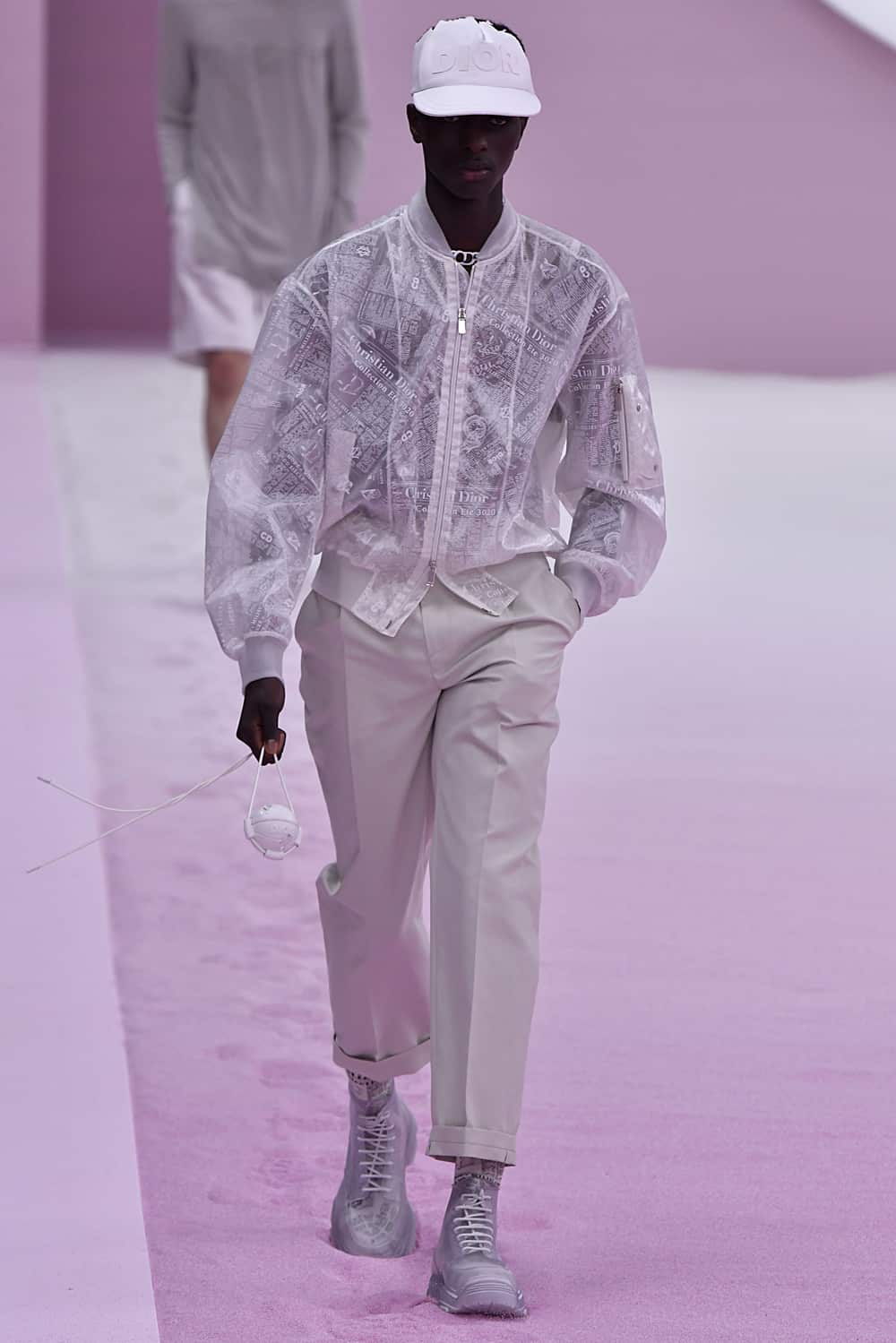 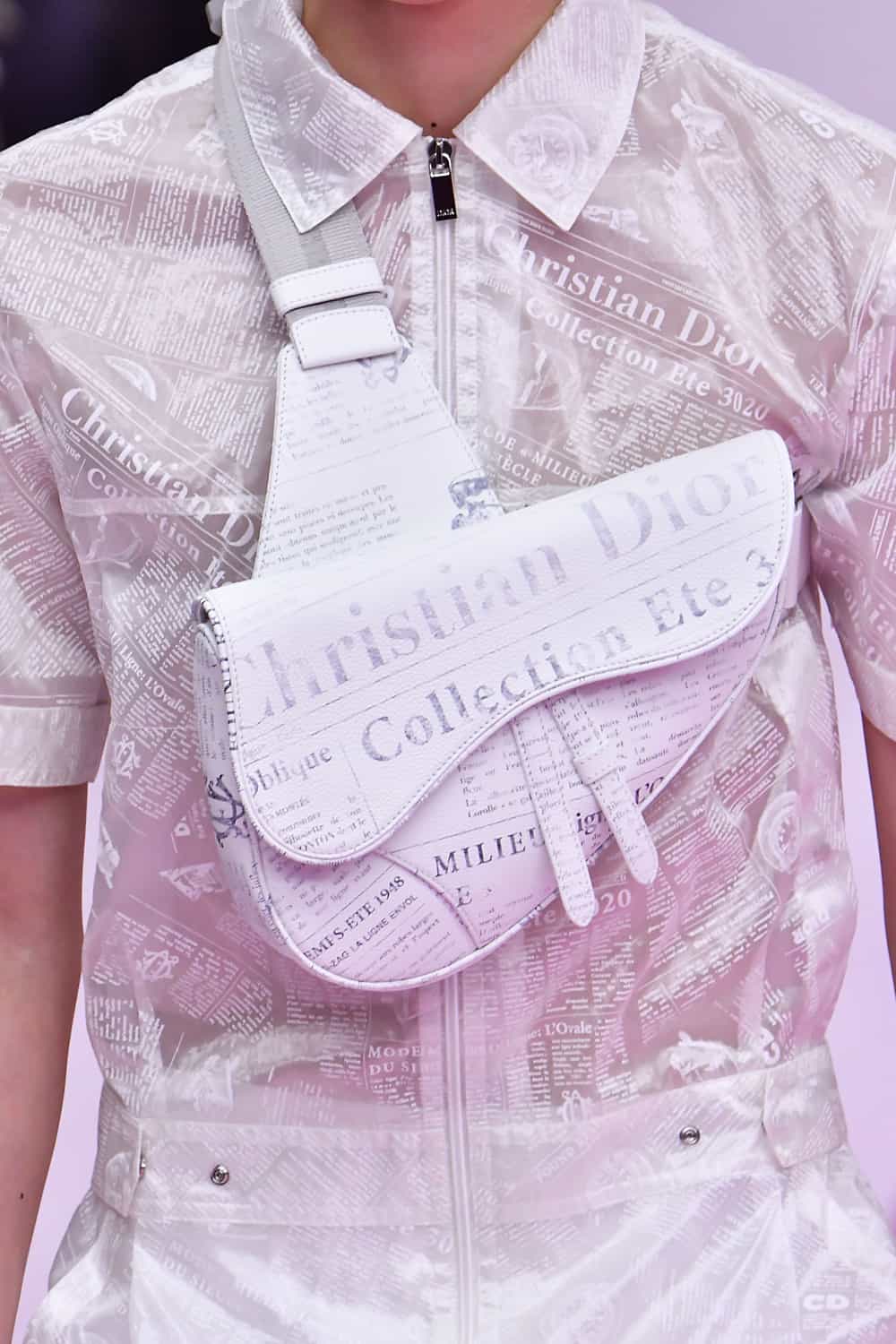 Almost, but not quite.

The thing is, Galliano’s comments about his original print really upset me when I first heard them. When I was growing up, my mother and I volunteered to feed the homeless, and it struck me as incredibly crass for Galliano to take their suffering as his inspiration when creating some of the most expensive clothes in the world. And to talk about it in such an off-hand way, with such complete disregard for the people themselves, just seemed cruel. It felt gross to me then, and it feels gross to me now to remember it.

I’m not saying that no one can or should ever do newspaper print again, but it means something different at Dior. It has a history. And maybe Jones is trying to reclaim it on its own terms. And maybe that’s a good thing. But I think there is a difference between acknowledging a thing’s past and saying you want to move beyond it and just disregarding context and history altogether in the name of aesthetics. Who is to say which of these things Jones is doing in this case? Certainly not me. Dior’s press release about the collection talked a lot about history and melding the past and the future, but it would be irresponsible of me to read too much into that one way or the other. Nor am I trying to make some grandiose statement about Kim Jones as a person or a designer.

At the end of the day, all I can say for sure is that this print is back and that it has a problematic history. It’s up to you to decide for yourself how you feel about that.