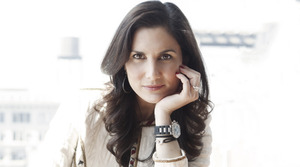 (NEW YORK) Luxury fragrance brand Kilian just opened its first U.S. brick and mortar retail store at 804 Washington Street in the Meatpacking neighborhood this month. Before the store’s big bash to fête its fashionable new digs, we sat down with U.S. CEO Elisabeth Noel Jones to find out what’s on offer. Turns out there are plenty of exclusives on offer including a new New York City-inspired scent to new luxury lifestyle products like clutches based on the brand’s signature black lacquer boxes that house its artisnal, coveted scents. The brand was founded by Kilian Hennessy (heir to the Cognac fortune that is now part of LVMH) just six years ago in 2007 with only six scents, via a launch at Bergdorf Goodman. Now, the brand holds its own in the leagues of storied and established high-end perfumers like Creed, that’ve been around since the 18th century. But despite his last name, Hennessy is doing it all on his own alongside Jones, his wife and business partner. Jones filled The Daily in on how the brand is balancing their cross-continental lifestyle while building a burgeoning luxury brand. As you might suspect, it’s no small feat.
BY PAIGE REDDINGER

Why is now the right time to open your first freestanding store?
It was about finding the right opportunity. We’ve been looking for over a year: we looked uptown, downtown, East side, West side, and it’s all really expensive. We were in shock looking at real estate. The Meatpacking is a pretty established neighborhood and it’s surrounded by luxury stores, yet it’s a little off the main track.

Did you time it to open on Christmas?
It was just lucky! We actually wanted to be open in the fall during September, but with architects and permits it gets complicated. Things got delayed. Since it’s our first time opening a store, we didn’t know how much time each task would take. There were a few hiccups along the way, but now we’re open just in time for the holidays.

The store is beautiful. Who decorated it?
We used our decorator that we work with on everything; we also use him personally. He is a friend and his name is Chahan Minassian. He is from Paris and he is fabulous! He helped us with our showroom in Paris and our store in Moscow. He also designed a lot of the furniture and the rug. He really understands Kilian’s aesthetic.

Is this your first freestanding store?
Our first store is outside of Moscow at Crocus City Mall, but it was opened by one of our distributors. In terms of distribution and sales it’s huge for us. The perfumes are sold for twice the price! Russians love luxury, and a lot of them have the money to pay for it. The mall is 30 minutes outside of the city, and there are all these beautiful fashion stores and restaurants, but it’s dead. The thing about this mall is that there’s a helipad—people take their private helicopters to do their private shopping at the mall, because it’s easier than going to the main city of Moscow. We actually had to get a money counter, because of all of the cash that was coming in. The Russians are wonderful people who love our perfume—and we love them for loving our perfume!

How did you get started in the fragrance business?
I started in retail, actually. I went through the Saks training program in 1999. I started working in the fashion buying offices as an assistant buyer. I went from level one to level two, and then I became a buyer in cosmetics at Saks. I started doing what they call lifestyle fragrances around 2004. These are more artisanal and made by real perfume houses, as opposed to a scent made by a mass fashion brand. So at that time I was buying Miller Harris from London, L’Artisan Parfumeur from Paris, and Susanne Lang from Canada. From Saks I went to Bergdorf’s, where I had all of the fragrances under my umbrella.

When did you meet Kilian Hennessy?
In 2007, Kilian came to my office to make an appointment and to show me his new fragrance collection. When he came in, I was completely blown away! At the time there were six scents that he presented to me, and they were really beautiful. At the time he was negotiating with both Saks and Bergdorf’s to launch in the U.S., but Bergdorf’s got it and launched in 2007. Business took off right away, which was really exciting.

When did your relationship with Kilian evolve past just work?
In 2009, two years after we met. It sort of just happened as time went on. We were traveling and eventually we realized we’ve been through such an exciting time together. We both really understood what each other were doing. It was a partnership, and it just developed from there. It’s very complicated to have a personal and work relationship with someone, but it was a risk I had to take, because I felt so strongly about it. Life is about trains passing: you either get on the train or you don’t.

You both split your time between New York and Paris. How do you balance it all?
It’s crazy! We live in two countries and have kids in two countries. I have a son in New York and he has two kids in Paris. When we do our agenda, we do it six months in advance. First we plug in the kids’ schedules and then we plug in when he will be in New York or Paris. Then, I call my buyer and see where we want to do personal appearances. For us, it’s not a big deal. It’s become second nature. Our lives are spent on airplanes. We’re used to it!

Talk about frequent flyer miles! Are you loyal to an airline?
Air France and Delta if I can manage it, because then we get points.

How many fragrances are there now?
There are 24 with the edition of Apple Brandy, which we just launched. It’s the exclusive to our new boutique here in New York. The Apple is paying homage to New York being the Big Apple and Brandy is a link to his heritage of being part of a Cognac family. It smells amazing! We’ve been officially open for over a week, and that’s the fragrance that’s driving the business. All of our existing clients are dying to try it, and they know that they can only buy it at the new boutique.

How are they categorized?
We have four collections in the brand: L’Oeuvre Noire, Arabian Nights, Asian Tales, and In the Garden of Good and Evil. For us the fragrances are about telling a story. We want to make our customers feel like they are the actor or actress in their own play. There’s a romance behind all of them. For a lot of big-brand name fragrances, they try to make everything very simple. An aquatic scent will be blue and packaged in a blue box, making it very easy to understand. For a salesperson, it’s also easier to sell, if it is blue they could be like, “It’s aquatic and smells like the ocean breeze.” However, for us all of our fragrances really carry an emotional story and have a lot of senses to them, in order to evoke a feeling. Kilian is also my significant other, so we’ll be on vacation and talk about what we should name scent number three. So a lot of it becomes engrained in my day-to-day life.

How did Kilian found the company?
Kilian has worked in perfume his whole career. What fascinated him is the common language that people use to describe scent. His first job in the industry was for Christian Dior perfume. That is actually the first time that he ever worked for LVMH, even though his grandfather founded the LVMH group, which he sold to [Bernard] Arnault. Then he left to work for Paco Rabanne, which is part of the Puig group. After that, he went to work for Giorgio Armani as the international marketing director for Armani perfumes. Kilian created Code for women and Code for men. Those were really his first perfumes. He has really long, varied experience working for all of these different fragrances, but frankly he lost hope in the way that the industry began to create perfume.

Why did Kilian lose hope in the fragrance biz?
As a perfume creator for one of these houses, you’re given a small budget. That one scent with that one packaging has to appeal to everyone with varied fragrance tastes in different cultures. So he thought he was really losing his integrity, because it was such a mass-produced commodity. He wanted the bottles to be able to be refilled, and look like the ones our grandmothers had.

The packaging is indeed beautiful. Was that a focus?
Yes, they come in beautiful lacquered boxes with a key. The boxes are all handmade and they’re lacquered 14 times. It takes three months to make each box, because they have to let it dry then lacquer again and in the end you get a very shiny finish. The inside is removable, so you can reuse the box as a keepsake box. It’s really going back to that level of luxury. For our holiday collection, we wanted to give someone a reason to carry their perfume with them, so there is a great carrying case that can also be reused as clutches. We also have actual clutches that are exclusive to this store based on our black boxes. They retail between $2,000 and $3,000 dollars.

Tell us a little bit about the bespoke offering.
Kilian works with each customer one-on-one to create their own customized scents. It’s $30,000, and the process is unique to each person. The client then owns the formula, so there’s only one of that particular scent in the world. It’s very special. There are a few now and then: Right now, we’re working on one in the Middle East and one in Russia.

What’s your favorite scent?
I really have a wardrobe, so it depends on my clothes, my mood, and the time of day. I’ve been wearing ‘Amber Oud’, which I wear a lot in the winter. It’s heavy and makes me feel very warm. All of them are unisex. Kilian wears it too. He smells amazing in it.

What is it like trying to grow a niche luxury perfume in today’s market?
That’s the main battle we’re fighting. Brands like Chanel and Dior are in 15,000 stores in the world. We’re actually so small, only being in 200 stores, but we’re in the 200 most luxurious doors. We’re in 23 Saks stores around the country, for example, and you have to have someone that works for you in every store to push and sell your brand. What we really keep at the forefront is customer service: How do we make a customer loyal, and have them walk away saying that was the best experience that they had? Whether they buy or just try a sample, our goal is to have them have such a special experience that they want to come back. That’s what makes sales happen.