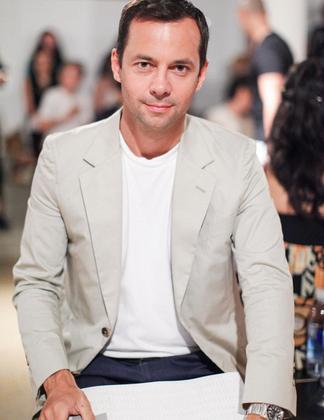 On Thursday night, party hoppers flocked to Canoe Studios in Manhattan to celebrate PPR’s upcoming name change to Kering on June 18. Former CNBC and CNN Live anchor Nicole Lapin was on hand to perform emcee duties while Danish singer-songwriter Oh Land provided the live beats against a backdrop of the new Kering owl logo. We caught up with the head of Kering Americas, Laurent Claquin, to talk name games, and Francoise-Henri Pinault‘s nickname.

How’s New York treating you, Laurent?
I used to visit here all the time, but it’s a different thing to live here, isn’t it? I love it! One of the best surprises here is the light; the blue, crispy skies. The bad weather never lasts more than a couple days. You know, the city gives a lot and takes a lot but there’s so much energy and enthusiasm. And people are very…I was going to say caring.

Speaking of caring, let’s talk about PPR’s name change to Kering. How long was the company planning this?
We’ve been working on it for more than a year. For the last few years, as you know, we’ve been changing the scope of the company, switching from a conglomerate profile that’s diversified, to a more integrated group. This is a significant move, yet a natural evolution. It comes at the perfect time, while we celebrate our 50th anniversary!

What do you think of the new name?
I love it because it means something, compared to what we had before which was three letters: PPR. That’s a little bit cold and corporate. Kering resonates with all the employees, and says not only who we are but the way we do business. It’s very easy to remember and pronounce; it’s very international as well.

Is it changing the office dynamics at all?
People in the office go around and say, ‘is that a Kering way to do things?’ or ‘Is it Kering?’ all the time!

Did you tell your brands, like Stella McCartney or Christopher Kane, about the name change before you announced it?
No, we actually kept it a secret. We announced it to the executive committee and the board, then we announced internally to all our offices through a live webcast. That same day, we had our convention in Paris with the 200 leaders of the group. The next day we did a press conference.

How did your brands react?
Some were a little surprised and didn’t know what to expect, but it’s growing on them. They understand the value of it at a corporate level, and it resonates with them. We’re like a family.

We love the owl logo. Were other emblem ideas discussed?
We decided on the owl immediately because François-Henri Pinault wanted an animal that was alive, that had energy. And his father collects owls. It’s a very discreet animal, it has vision, and it’s protective. It was the perfect match!

Kering tapped blogger Garance Doré for its new video campaign.
We’re a B2B communication, so we’re mainly addressing the corporate target, like investors and analysts. When you go digital, there’s no frontier, so we wanted a more B2C voice. Garance knows how to talk to the consumer, and although the videos are still corporate because that’s who we are, she brings a light and fresh style. And she’s obviously one of the most famous fashion bloggers, so we wanted to use her knowledge of the digital sphere and fashion. Plus, she has over 200,000 followers on Twitter, which helps boost the video campaign.

In the first video, Volcom’s SVP of marketing referred to François-Henri Pinault as FHP. Is that a nickname he commonly goes by?
Yes, a lot of people in France call him that, but I don’t call him that. If I talk about him to a colleague, I can say FHP, but when I’m talking to him, I call him Monsier or François-Henri.

Some outlets have suggested that Kering’s name change might be to distance the company from LVMH and their reputation. Any comments?
We have a lot of friends working at that company, and they’re very happy there. It’s just true to who we are, and we wanted to change the name because of the transformation of the group. It was a necessity and an opportunity. We didn’t look at any competitor strategy.

Gotcha. What are your top priorities for Kering in the U.S. and Latin America during 2013?
We’re focused on expansion. We still have a lot of potential for organic growth, which means new markets, new stores and store formats, new product, and new distribution channels including e-commerce for all luxury and lifestyle brands. The markets are obviously different in each, but all our brands are rapidly expanding in both the U.S. and Latin America.

It's Official: PPR Is Now Kering

Christopher Kane on Making A Deal With...