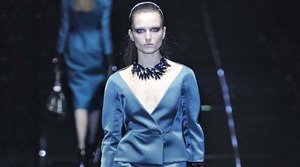 (NEW YORK) French luxury conglomerate Kering, previously known as PPR, has acquired a majority stake in Normandy-based tannery, France Croco, for an undisclosed sum. This is the company’s first major move since its rebranding last week.

“This acquisition will allow Kering’s brands to further secure a sustainable supply of high quality crocodilian skins,” said a company spokesperson at Kering. “This vertical integration is part of the strategy of Kering to better support its brands to better reach their potential.” Bottega Veneta, Brioni, Gucci, and Alexander McQueen are among the Kering-owned brands that currently utilize croc skins on ready-to-wear, accessories, handbags, and footwear.

France Croco, one of the largest suppliers in the world, was established in 1974 by Jacques Lewkowicz and is now run by his son, Dan Lewkowicz. Following the completion of the deal, Lewkowicz will remain CEO of the operation, which employs about 60 workers. Currently, France Croco is the second tannery under the Kering umbrella. The luxury group also owns Caravel Pelli Pregiate, an Italian tannery specializing in exotic skins.
MARIA DENARDO

Karl Lagerfeld Gets Into The Burlesque Business