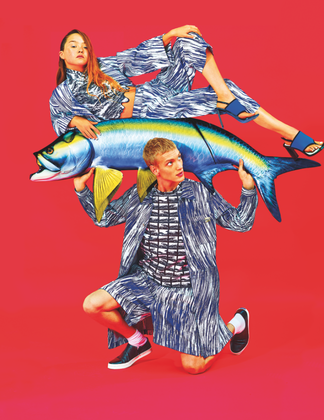 Kenzo’s Humberto Leon and Carol Lim have once again partnered with Toiletpaper Magazine (haven’t you heard of it?) for their Spring/Summer campaign. The brand has signed model and actress Devon Aoki and Paul Bosche to appear in the images, which plunge into a fantasy world of giant fish, waves, and marine elements. Where are they celebrating the launch? Basel, of course, where one can indeed find fish, waves, and marine elements in between sipping champagne and spa treatments at The Standard. There’s a roving Kenzo bus stopping at key points around South Beach to reveal the six different visuals, some of which will be used in the campaign and other’s in the brand’s KENZINE mag. To find out where the bus will be stopping, go to Kenzo.com.