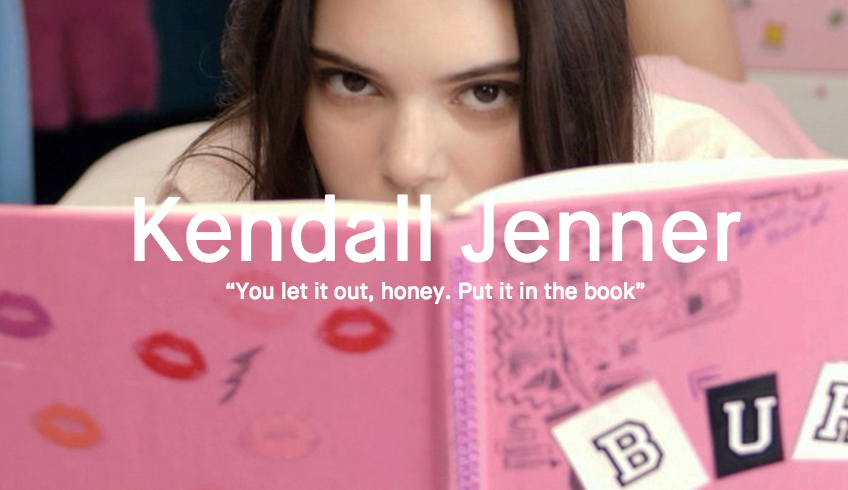 Kendall Jenner has followed in the footsteps of Mean Girls character Regina George and created her very own burn book. Who’s the target? Jenner herself. In order to address the haters who have been going on about her supposedly “undeserved” modeling career, Jenner made a parody video with Dazed and Confused magazine of herself writing a burn book, referencing all of the nasty comments she’s heard. Jenner has walked some of the biggest runways in the business from Marc Jacobs to Chanel, but some feel that her easy, breezy entrée into the competitive biz has been just a tad too easy for the reality star. Recently, model Arisce Wanzer wrote a public letter complaining that Jenner was “cheapening the profession.” And of course, there were plenty of rumors that proceeded it, alluding to the fact that Jenner wasn’t too popular with her runway peers.

In the film, Jenner can be seen writing in her pink burn book and reading aloud all of the comments on her career. We’ve included several excerpts from the video below. Even if you hate her, you’ve got to love her (just for a second) for having a sense of humor about it all.

“Kendall Jenner will never be a real model.”

“Kendall Jenner is a spoiled brat.”

“Kendall Jenner’s face and walk are so boring.”

“Too bad she’s one of the richest, prettiest, most talentless people ever.”

“I hear she does car commercials in Japan.”

“Kendall Jenner is a self absored white bitch with millions of dollars for doing absolutely nothing.”

Kendall Jenner Is Trademarking Her Name for...