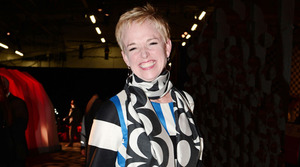 (NEW YORK) Lynn Shanahan is adding to her duties chez Kellwood: the current chief executive officer at Kellwood Brands has been promoted to chief executive officer at Kellwood Co. The beefed-up CEO title involves taking on much of what Jill Granoff was responsible for when she juggled a duo of CEO titles for Kellwood and Vince. Last month, Granoff intensified her focus solely on Vince, as CEO of the brand, shortly before the luxe basics label’s big IPO debut. Shanahan’s previous gigs include founding an operating management company, C2 Group LLC, as well as group president for Tommy Hilfiger.

Shanahan has been with Kellwood since July; for the past five months, she has overseen the company’s portfolio of labels including Rebecca Taylor, Sam Edelman, David Meister, and XOXO, as well as private label business for the likes of Target, Nordstrom, Macy’s, and J.C. Penney. What will Shanahan’s promotion entail? An array of corporate responsibilities, including H.R., e-comm, legal, I.T., and finance. Kellwood currently lures in a volume of approximately $500 million, according to WWD.

More shuffles at Kellwood (many involving recent moves at Vince) include the appointment of Joe Lombardi as Kellwood’s CFO. He previously held the same title at Barnes & Noble, and is the successor to Lisa Klinger, who did CFO duties for both Kellwood and Vince before her role shifted to solely heading up Vince’s finances. Additionally, Jim Scarfone is now SVP of H.R. at Kellwood, coming from the same position at beauty chain Ulta, prior to which he did a stint at Duane Reade. Also joining the Kellwood team: Leslie Singer was brought over from her EVP of sales and merchandising role at NYDJ for the president post at Sam Edelman.