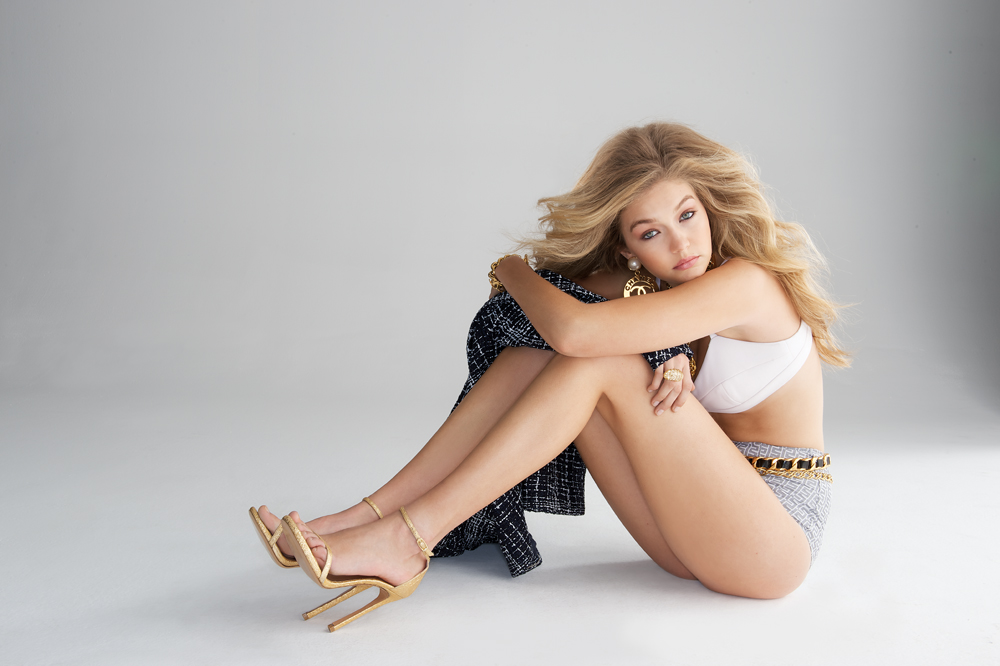 With the face of a modern angel, the inevitable comparisons to Kate Upton, and more industry buzz than a beekeepers convention, 19-year-old model Gigi Hadid is the official fashion superbabe of summer. Remember her name—she’s about to go global.
BY EDDIE ROCHE

You were great with Gilles today. Were you always that comfortable  on set?
I learned that probably in the last six months. The more I do it, the more comfortable I get. People who worked with me six months ago are like, ‘Oh my god! You’ve gotten so much better!’ I used to model for Baby Guess and Guess Kids when I was little, and my mom [Yolanda Foster, of The Real Housewives of Beverly Hills] was a model, so I would travel with her on a lot of her shoots. She was also really into photography and documented my whole childhood. I was always in front of the camera.

The last time we saw you, you were naked on a train in VMan. What was that shoot like?
The story behind it was beautiful, actually. They wanted to put me on a train as a metaphor for my journey into adulthood. It wasn’t supposed to be provocative or anything. It was just about a natural acceptance of myself. That’s how I was thinking about it, anyway. I think a lot of girls are able to relate to me because I’m not two pounds soaking wet. I like that about myself. That shoot was a lot more to me than just taking my clothes off. It was about acceptance. Nudity is so frowned upon these days. If you look at sculptures from hundreds of years ago, everyone’s naked. It’s not a bad thing. We’re all naked at least twice a day.

Did you know that you were going to be naked?
No, I thought I was going to be wearing lingerie. But I accepted the concept and tried to see the artistic side of it.

What did your family think?
My mom understands because she was in fashion, but she didn’t know about it before it came out. A lot of media and blogs attacked her for it, which kind of pissed me off. I’m 19 years old. It’s me and my manager guiding my career, not my mom. I don’t know if my dad’s seen it. My family doesn’t really talk about my work. They love me for who I am.

You’ve been on quite a roll lately. You also shot with Bruce Weber for the cover of CR Fashion Book. How did that go?
Bruce is just the kindest, most warm-hearted person ever. He reminds me of Santa Claus. I just want to hug him. It happened because [V editor in chief] Stephen Gan asked [IMG Models managing director] Ivan Bart if there was one girl he should meet with, and Ivan told him me! I went in to see Stephen and that same day he sent me straight to meet Carine Roitfeld.

Were you nervous?
I honestly didn’t take it seriously. I thought, I’m going to walk into Carine’s office, she’s going to laugh at me, and I’m going to leave. That she wanted me in one of her shoots at all was just insane. The fact that they centered the shoot on me and put me on the cover was even more insane.

You’re taking classes at The New School. What are you studying?
Criminal psychology. When I tell people, they either say that they’re really surprised or that I’m in the perfect business for it, which is scary and a little sad. I’ve just always been interested in the topic. I’ve been watching crime shows like CSI since I was 3 years old.

Your given name is Jelena. Why Gigi?
According to my mom, I’m named after a little girl she met on a shoot in Capri. She and my grandma started calling me Gigi when I was in first grade. It just stuck.

Are you familiar with the Vincente Minnelli musical?
Everyone asks me that! Every time I say my name they’re like, “Have you seen the movie?” I haven’t yet, but I’ll let you know how it is.

Oh, I’ve seen it. Leslie Caron is flawless. Does being compared to Kate Upton intimidate you at all?
I wouldn’t say it intimidates me, exactly. It’s definitely a big pair of shoes to fill. I try not to think about it that way, though, because I want to make my own shoes. It’s an honor to even be mentioned in the same category as her.

When was the last time you were in the Hamptons?
Last Halloween we went pumpkin picking with one of my friends who’s from the area and we all went back to his house to carve them. I used to come out here as a kid. When you think of New York it’s always the city, but I actually connect more with the Hamptons.

You appear on your mom’s show The Real Housewives of Beverly Hills every now and again. Would you ever do your own reality show?
I’m not interested in reality TV. I want to focus on modeling and get away from all that. I want to be known as a model, not a reality star.

You’re big on social media. Tell us about “Ask Gigi.”
It’s something I started on YouTube. I tell my followers on Twitter to tweet me questions using #AskGigiYouTube, and then when I have a spare second at work I get on my computer and try to answer as many of them as I can. I find that answering simple questions like “What’s your favorite ice cream?” is a great way for fans to really feel like they know me better.

So which is it?
Mint chocolate chip.

How do you usually spend Memorial Day weekend?
Before I moved to New York I always spent it on the beach in Malibu with my friends. We’d have a big barbecue and everyone would bring food, and we’d have a volleyball tournament. Not sure what I’ll get up to this year.

Are you excited about your impending megafame? We’re hearing big things.
I’ve grown up in and around the spotlight, and I’m starting to go into my own spotlight. I want to be successful, but the negative stuff does get to me sometimes, you know? I consider myself a pretty normal girl, so when people are on the Internet writing stuff about me, I’m like “Hello! There are whales to save! Go talk about something else!”