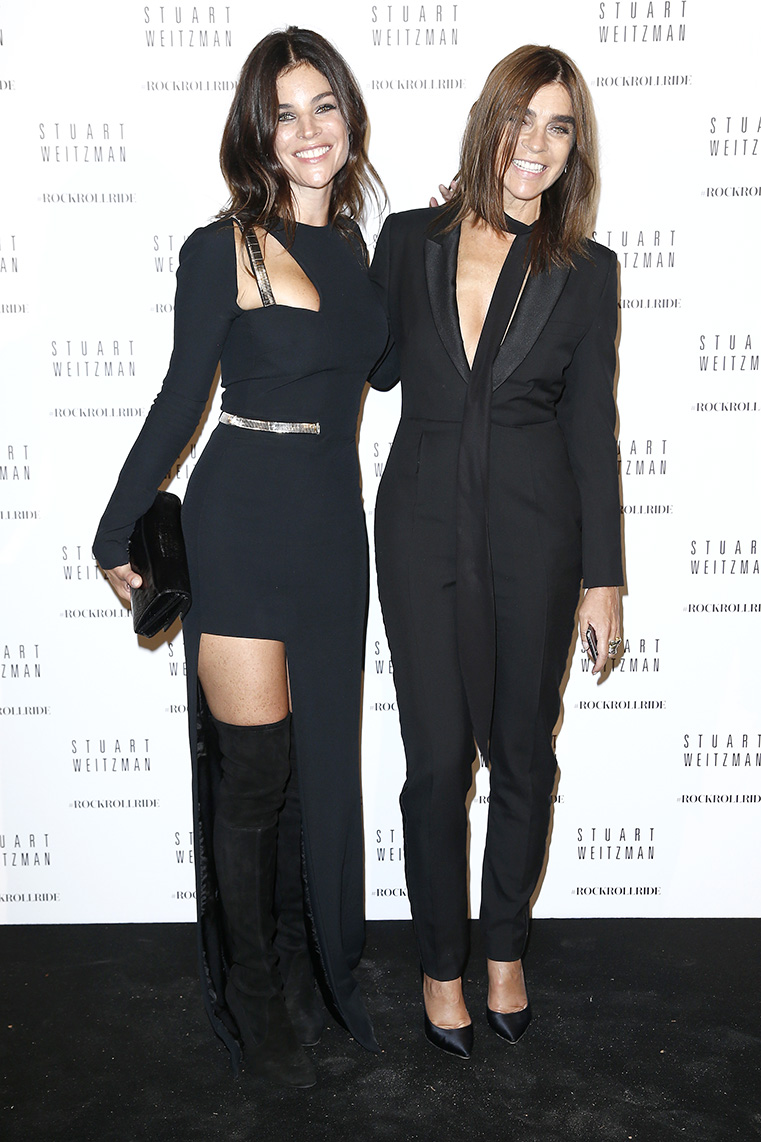 Where was tout le monde last night in Paris? At Stuart Weitzman’s swanky bash at the tony Hôtel Salomon de Rothschild to debut Julia Restoin Roitfeld‘s directorial debut for her first short film Rock Roll Ride, which she created for the brand starring Poppy Delevingne and Dylan Penn. So, how was it working with Roitfeld?

“It was total dream come true, because she’s one of the sassiest chicks around. She’s probably the only woman in the world that I’d ever take my clothes of for,” said Delevingne. But Roitfeld told us that although she said yes to the project immediately, she was nervous about living up to the brand’s previous flicks. “I was so flattered, because James Franco did one of their films right before me so I’m following in the footsteps of real professionals,” said Roitfeld. “I was so stressed, because I felt like I needed to be at their level.” Roitfeld is the first female director to take on the project; previous films have been directed by Franco, Balthazar Klarwein, and Nino Muñoz.

You can certainly count on a Roitfeld to bring out the chicest crowd in town. There were top models like Daphne Groeneveld, Miranda Kerr, Rosie Huntington-Whiteley, and Daisy Lowe. Much later in the eve, Cara Delevingne showed up to support her sister and seemed to be having a good time dancing around and kindly taking selfies with guests. There was the gaggle of “it” DJ’s like Hannah Bronfman, Atlanta de Cadenet, Harley Viera-Newton, and Leigh Lezark too. And even top photogs like Mario Sorrenti and designers including David Koma, the newly minted artistic director of Mugler, mingling about. Speaking of Mugler, Carine Roitfeld and Julia Reston Roitfeld were both perched front row at the show and last night Julia rocked a sexy black cut-out number fresh off the runway along with her thigh-high suede Weitzman boots (you know, the ones everyone is coveting). Virginie Courtin-Clarins, the development director of Mugler who hired Koma, was also at the party, which makes us think Carine may have also had a hand in Koma’s appointment. Perhaps a suggestion to Courtin-Clarins during the search?

The rest of crowd was definitely there to let loose. The waiters kept glasses and glasses of champagne and wine flowing around the room, while plenty of people stepped outside to smoke cigarettes (including Huntington-Whiteley). This is Paris, after all. It was a packed house as guests meandered from room to room in the former Rothschild mansion. “Wow, there are so many people here!” we overheard Courtin-Clarins telling a friend. But she could hardly have been truly surprised. Stuart Weitzman, one of the biggest names in the shoe business? The Roitfelds? The Delevingnes? The Courtin-Clarins? Naturally, the party was packed!