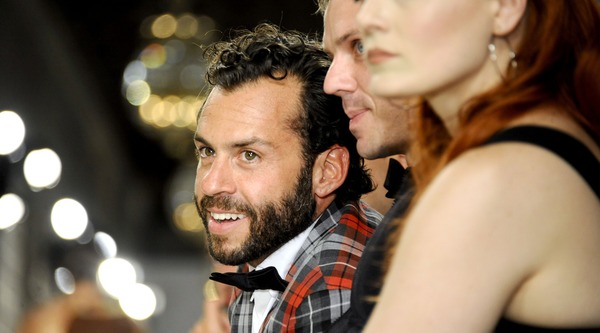 You’re the brains behind this gala. How did you get involved with amfAR?
For years I produced fundraisers, parties, nightlife events, concerts, and fashion parties. I was just starting to get bored. It sounds cheesy, but I really wanted to do something with philanthropy. I wanted to build a franchise that raises money for charity. At the same time, I got an invitation for an amfAR event and subsequently I went to Vienna for the Life Ball. I met the CEO of amfAR. We hit it off, started talking, and I came up with this idea of doing a black tie, black leather men’s fashion event. I pitched it to him and they ended up really loving it. It was perfect timing for them because they wanted to start doing a new series of events that were young, hip, and focused on men’s fashion. Everything I had been doing in the past 15 years lead up to this. I’m now lucky enough to be able to call all the people that have been coming to my parties that I became friends with and ask them for favors. It’s such a big task to put all of this together.

Why do you think it’s important for the men’s fashion community to rally around this event?
The reason we started this is because it seemed like there wasn’t a very heavy event focused on men’s fashion. We wanted to do a serious event focusing on the crossroads of philanthropy and men’s fashion. Every year we’ve been showing all the major designers and then auctioning off the looks in the show to raise money for amfAR. It’s been a huge hit, so now we do them all over the world. We’ve raised about $10 million dollars.

What’s the inspiration this year?
We noticed in so many of the men’s shows that there was a lot of influence on military tailoring and interpretive camouflage. It’s different designers’ interpretations of military in fashion, so the looks shown will reflect that.

This year’s bash honors Alan Cumming, Valentino, and Jennifer Lopez. How and why did you choose to celebrate them?
It was a combination of amfAR and I choosing them. Alan is a very close friend of mine. I met him years ago, when he was doing Cabaret, at a charity event for Jeffery Fashion Cares. He agreed to do the first charity event I ever produced, which was a gay marriage benefit. We hit it off and have been friends since then. Alan has literally participated in every charity and fundraising event that I’ve done for the past 10-15 years. He’s traveled all over the world for amfAR and has donated so much of his time to raising money for charities. He is a super well-deserving recipient of this award.

How about Valentino?
Every year we honor a designer. Last year we honored Marc Jacobs and Robert Duffy. In the past, we’ve honored Michael Kors and Jean Paul Gauliter. We try to honor a designer who has an amazing influence in fashion, particularly men’s fashion, but also a strong philanthropic history. Valentino launched his own nonprofit with Elizabeth Taylor for AIDS in Italy. It had a long-standing history of raising money for AIDS. And, of course, he’s just a legend in terms of the world of fashion.

What led you to pick Ms. Lopez?
Jennifer does a huge amount of humanitarian work, which I think gets overshadowed by how famous she is. I’ve been friendly with her publicist Mark Young as well as [her manager] Benny Medina and pitched the idea of trying to do something to honor her for amfAR for quite a while. But the dates never worked out. We wanted to honor her for being such an icon. This is called the Inspiration Gala: it’s all about people who inspire us! Not only has she contributed to amfAR’s mission, but she has her own foundation and she’s worked with UNICEF and she’s traveled all over the world helping charities. She’s a fashion icon, too.

What’s in the live auction?
We’re auctioning off a date with Jennifer when she gets her star on the Hollywood Walk of Fame; there’s a trip to Paris to see the Valentino couture show; Ralph Lauren is sponsoring a package to do private polo lessons with Nacho Figueras in Argentina; there’s an iconic Warhol print, and a photograph of Liza Minnelli and Warhol by Christopher Markos.

What are the days leading up to the event like for you?
I have every 10 minutes scheduled. I’m in a series of seating meetings, sponsorship meetings, celebrity meetings and talent meetings. It’s just back-to-back. but it’s very fun.

Who are you most excited to see this year?
I am a secret Liza Minnelli fan. (Editor’s Note: A secret?) Alan surprised me once when Liza was giving a private performance at the Gramercy Hotel for 50 people, and he got me the stool in front of her. She sang right to me for about an hour and a half. It was the most exciting thing ever. I find any evening with Liza is always fun. I’m most excited to see her and Alan, of course, and Jennifer, and Dean and Dan Caten from DSquared2, who are good friends and chairs of the event. They’re coming from Italy and they were nice enough to dress me.

Rita Ora Is The New Face of Material Girl

Beauty Made in Italy Spotlight: Skin&Co