John Varvatos, From Rock to Pop 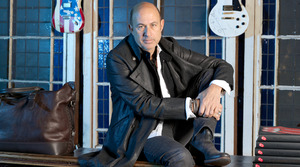 (NEW YORK) Fresh from the reality-TV trenches, menswear maestro John Varvatos is still getting used to people asking for his autograph. The Daily stopped by his boutique on the Bowery to find out how he’s keeping his cool.
BY EDDIE ROCHE

Your brand has always been about rock ’n’ roll. Were you ever in a band?
When I was in high school, but I was never any good. I’m lucky that I get asked to play with people on stage from time to time, but there’s always that moment when I realize it’s either in your bones or it isn’t!

What bands have you played with?
Cheap Trick, Alice Cooper, the guys from ZZ Top.

Were you obsessed with music as a kid?
I grew up in Detroit, which is a very music-driven town. There’s not a whole lot else going on. I lived in a really little house with seven other people and one little bathroom, and my way of getting away from it all was going down to the basement and putting on my headphones.

We’re in the old CBGB space. Did you ever see any shows here?
I saw the Ramones in ’79, Television, Patti Smith. I never thought about whether I’d want to put a store here, but it was empty for a couple of years, and I was in the area looking at something else and curious about what it looked like inside. Then I heard about the other possible tenants—drugstores, banks, that sort of thing—and thought, ‘This can’t happen.’

The Bowery’s changed a bit since then.
It’s not the derelict Bowery that was here before, definitely, but I don’t know what was so great about that. It was scary over here. There’s still a funkiness I like. It’s still grungy. It’ll never be what it was, but the world changes. A big part of the universe hates change, but I’m one of the people who love change. I embrace it. Life would be boring if it didn’t change.

Has being on Fashion Star been good for business?
It’s heightened mainstream awareness of the brand and me personally, there’s no doubt about that. Strangers are talking to me now. From a personal standpoint, I never wanted to be the face of the brand, but when you’re on network TV and there are 6 or 10 million people watching and your face is on buses, you’re going to have more awareness. I went in with a few trepidations but have gotten no negative vibes. I wasn’t a judge, I was a mentor, and that’s what I do every day.

Are you signing a lot of autographs?
There’s always people who want you to sign the inside of a coat or something like that, but more people just want to take pictures and put them on their blog or whatever. At first it’s embarrassing, but for the moment I’m very flattered by it.

Your new campaign features Led Zeppelin’s Jimmy Page and the blues prodigy Gary Clark Jr. Why those two?
They have a lot in common. Their music comes from the same roots. Jimmy is arguably the best guitar player in the history of rock. He’s up there with the greats. And Gary’s the young gun, but he’s not the young gun that’s going away anytime soon. He’s going to be around a long time. He’s the hottest commodity in rock at the moment, and we’ve believed in him from the onset. He’s magical. He’s the future.

You seem pretty laid-back. Are you?
I have my moments of intensity. Up until five years ago or so I was very shy, but I’m not so shy anymore. I couldn’t do television if I was! My wife, Joyce, is very outgoing and aggressive, but that’s just not my personality. It’s a very humbling thing when people want a picture with you.

You just showed in Milan a few weeks ago. How’d it go?
I don’t usually say this, but I think it was our best Fall yet. The funny thing about doing shows is that you do your show in Milan and the next day you’re in London starting work on your next collection. It’s not like a Broadway opening where you open up and there’s a big party. It’s almost a bit of a letdown. The real exciting part is when the clothes come into the stores and you see the sales doing well and the customers all excited. I’m most excited when I’m going through the airport at security and the guy in front of me is taking off a pair of our boots, or the guy sitting across from me on the plane has a John Varvatos garment bag.  I’m too shy to introduce myself, but I think, ‘Wow, that’s pretty freaking cool.’

Dreaming of Making It Big As A Supe?