John Galliano Tells His Side Of The Story To Vanity Fair 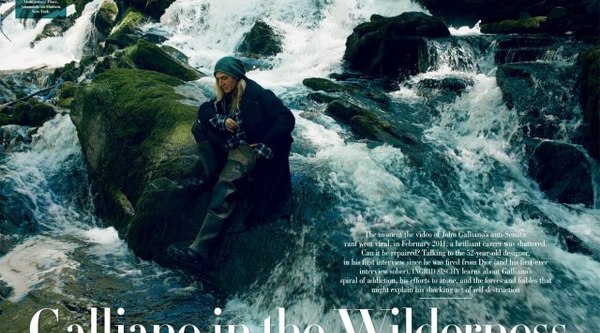 (NEW YORK) We’ve been curious to hear John Galliano‘s side of the story since his 2011 anti-semetic rant and he finally opens up to Ingrid Sischy in Vanity Fair’s June issue. The troubled designer reveals he’s been sober for two years after a stint at an Arizona rehab facility, and has no recollection of the incident that ended his career at Dior. The full article includes interviews with Kate Moss, Oscar de la Renta, Diane von Furstenberg, Elton John, Anna Wintour, Jonathan Newhouse, Naomi Campbell, as well as members of the Jewish community, including Rabbi Barry Marcus, of London’s Central Synagogue, and Abe Foxman, head of the Anti-Defamation League. You can read the entire interview when the next VF hits stands on June 6th. Here are a few quotes from Sischy’s interview to keep you satiated until then…

On the rant heard ’round the world: “It’s the worst thing I have said in my life, but I didn’t mean it…I have been trying to find out why that anger was directed at this race. I now realize I was so fucking angry and so discontent with myself that I just said the most spiteful thing I could.”

On his downward spiral:  “I was going to end up in a mental asylum or six feet under…”

On his complicated relationship with vices of every flavor: “I never drank in order to be creative, or to do the research. I didn’t need alcohol for any of that. At first alcohol was like a crutch outside of Dior. Then I would use it to crash after the collections. I’d take a couple of days to get over it, like everyone. But with more collections, the crash happened more often, and then I was a slave to it. Then the pills kicked in because I couldn’t sleep. Then the other pills kicked in because I couldn’t stop shaking. I would also have these huge bottles of liquor that people got for me. Towards the end, it was whatever I could get my hands on. Vodka, or vodka-and-tonic. Wine, in the belief it would help me sleep. Wrong. I did manage to stop the voices. I had all these voices in my head, asking so many questions, but I never for one second would admit I was an alcoholic. I thought I could control it.”

Galliano’s reaction to Bernard Arnault when confronted about his substance abuse issues: “Does this look like the body of an alcoholic?”

On life before sobriety: “I lived in a bubble. I would be backstage and there would be a queue of five people to help me. One person would have a cigarette for me. The next person would have the lighter. I did not know how to use the A.T.M.”

On now-obvious, then-oblivious clues that he had serious problems: “Not having washed, I’d be covered in sores and humiliated. I had the tremors. I wouldn’t sleep for five days. I would go to bookstores and get some self-help books, but I was in denial.”

On designing Kate Moss’ wedding gown: ‘“Creating Kate’s wedding dress saved me personally because it was my creative rehab. She dared me to be me again.”