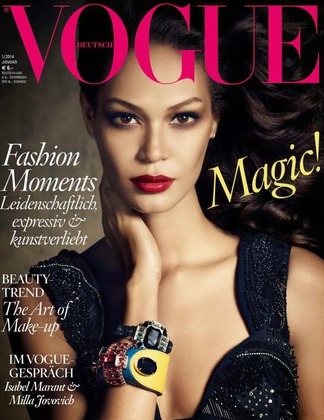 Oh how we love the sight of Joan Smalls on yet another major magazine cover. This time, she’s fronting the January issue of German Vogue for their “Magic” issue. Last week we gave you a first look at Smalls on the cover of American Elle‘s January issue. The always hilarious @bevysmith tweeted that next month is “JOANUARY,” with the IMG superstar also covering French Elle. Hello, 2014! Tonight you can catch her, along with Karlie, Doutzen, Cara, Hilary, Erin, Devon, Constance, Alessandra, and the rest of the gang spreading their wings on the Victoria’s Secret Fashion Show on CBS.