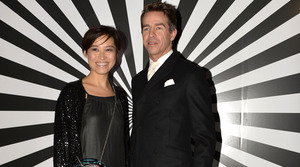 Where did Choi tackle the trade? From the ground up, and with some well-cobbled genes. Choi, who is also Choo’s niece, started out as an intern at the London-based company while studying at Central Saint Martins. A year into the program, Choi left school to work full time for the company as chief designer of the company’s couture business. Four years later, in 1996, she was appointed director of J. Choo Ltd. and went on to work with Tamara Mellon on design before Mellon’s departure in 2011 when Holloway and Choi were appointed co-creative directors.

Glamour Gets Catty For NYFW: Publisher Bill Wackermann Explains All