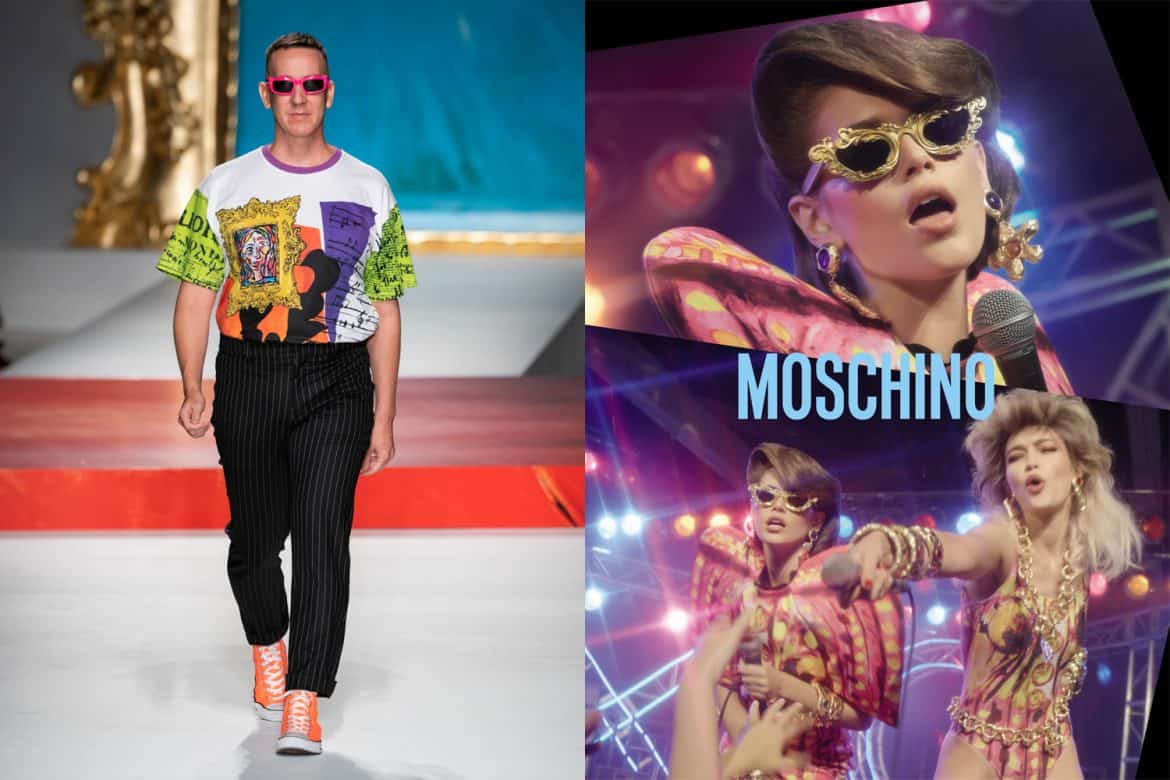 Catwalk of models, or curated masterpieces in a museum? That’s the question spurred by Moschino’s Spring 2020 collection with its overt nods to Pablo Picasso. The brand’s creative director, Jeremy Scott, explains how the inspired mash-up of fashion and art came to fruition.

Why did you decide to pay homage to Picasso for Moschino’s Spring 2020 collection?
I’d been thinking about doing a collection inspired by the muses of Picasso for a long time, creating this Picasso woman. I don’t know why I suddenly decided it was the right moment. Obviously he’s such an iconic, prolific painter and artist, with such a huge body of work. He’s been able to do something I think a lot of, let’s say, “name brand” things can do. We say Kleenex instead of just tissue, because it’s so identifiable; when you think of Picasso, you think of these abstracted female portraits.

One eye is bigger than the other, the mouth is skewed, all these different colors — kind of abstracting from reality. I wanted to take those elements, which I feel are so iconic of his work, and apply them to creating a collection that would embody the Picasso woman. So I did a deep dive into researching all the different women — his muses, lovers, wives, even his daughters — who he did renderings, portraits, and sculptures of. I tried to bring that inspiration to life and create the ultimate Picasso woman. 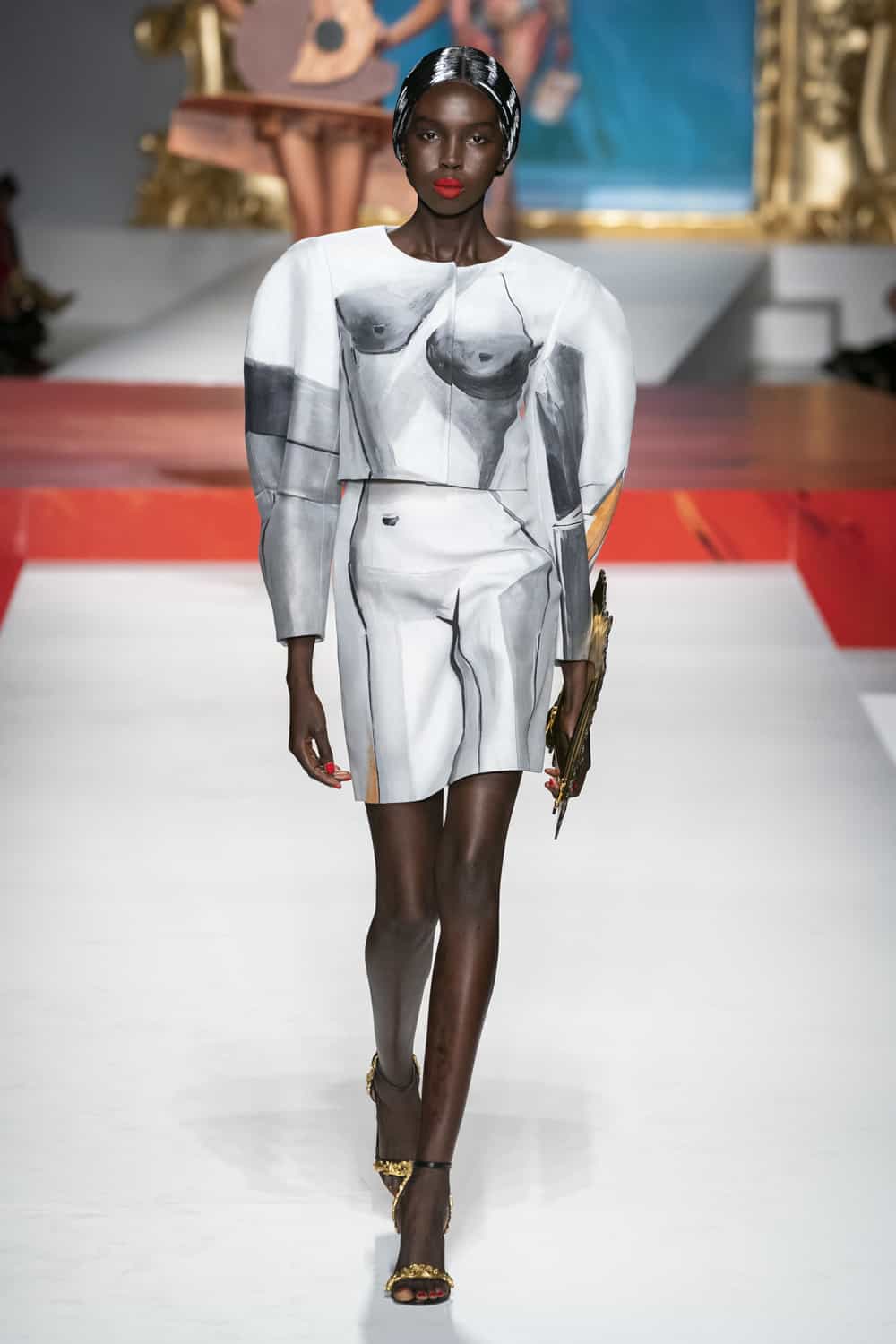 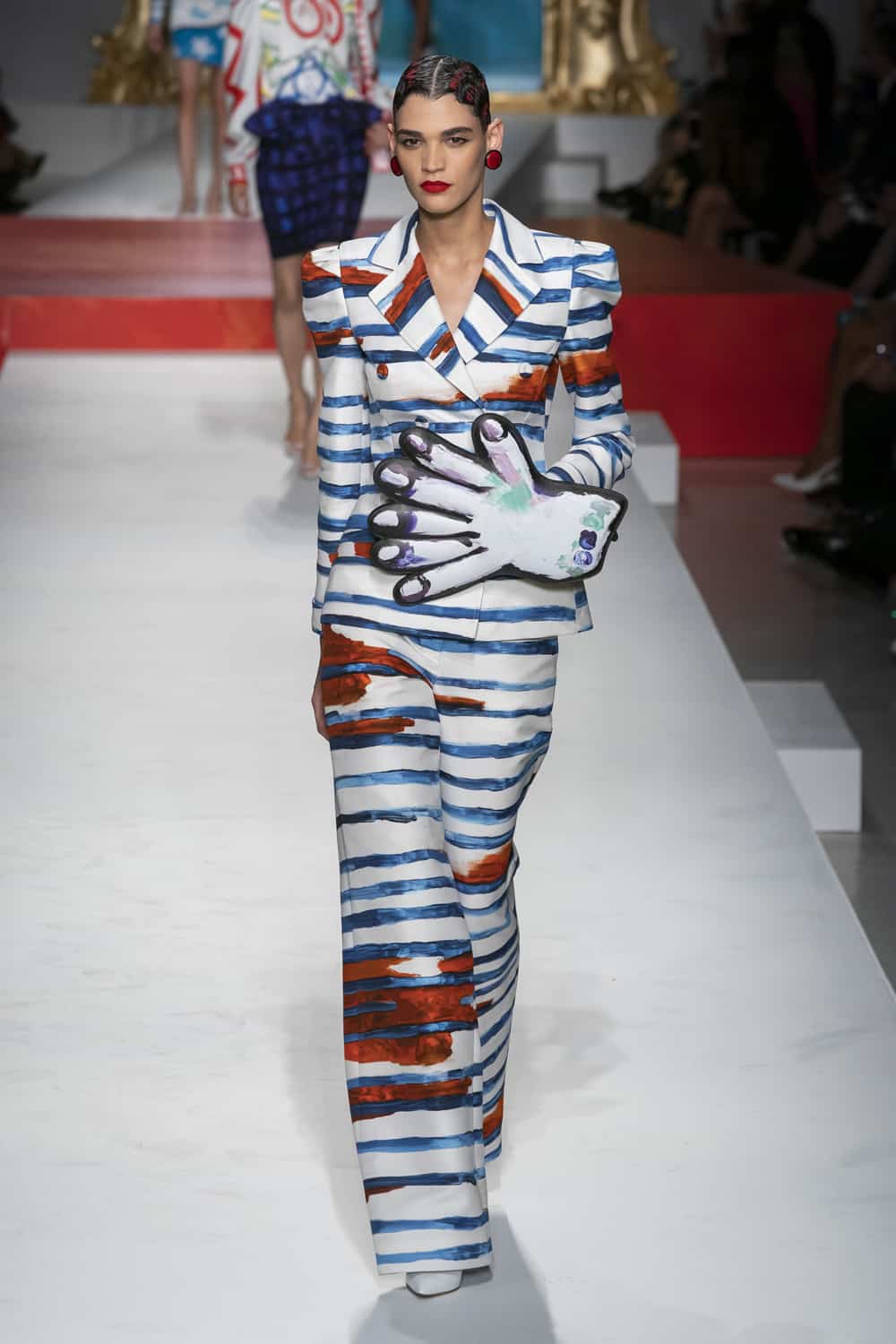 Did you learn any interesting trivia from your Picasso deep dive?
A ton! Did you know he was accused — in a court of law — of stealing the Mona Lisa from the Louvre? His friend said that he had done it, they went to court, and he had to try to say he didn’t do it, which he didn’t, but [the Mona Lisa] was nowhere to be found. They finally found it later in Italy — I think an Italian janitor or custodian had taken it and brought it back to Italy. But yeah, Picasso was accused of it, went to court, the whole thing.

Whoa! So how did Picasso’s work inspire your creative process for the collection?
I tried to take an amalgamation of things I loved from him and push myself to create. Like, let’s make this shoulder higher than the other one by 10 inches! Let’s create this abstraction of the dresses, and take inspiration from his color palette and vibrancy, and also his childlike qualities. There’s artistry in having the freedom to not worry about things looking so real, recognizable, or symmetrical. I feel so much art before him, and even in his early start, was very literal. Photography was just starting, so there was still this kind of realism, of trying to create something “accurate,” instead of just expressing something.

A lot of Picasso’s work was inspired by other painters, and was done as a reaction to other iconic paintings. I found that to be inspiring. There’s one outfit Léa Julian wore that’s inspired more directly by Portrait of an Unknown Woman by Lucas Cranach the Younger — and that portrait is also inspired by El Greco. But the thought of, “Okay, I’m doing this because Matisse did this or Degas did this, and I’m doing my version” — he did a whole series of that, which at that time weren’t as well received by art critics. I love that he was inspired by other painters who came before him — and did portraits inspired by those paintings. I thought it only made sense for me to also pay homage to one of the paintings in that series. 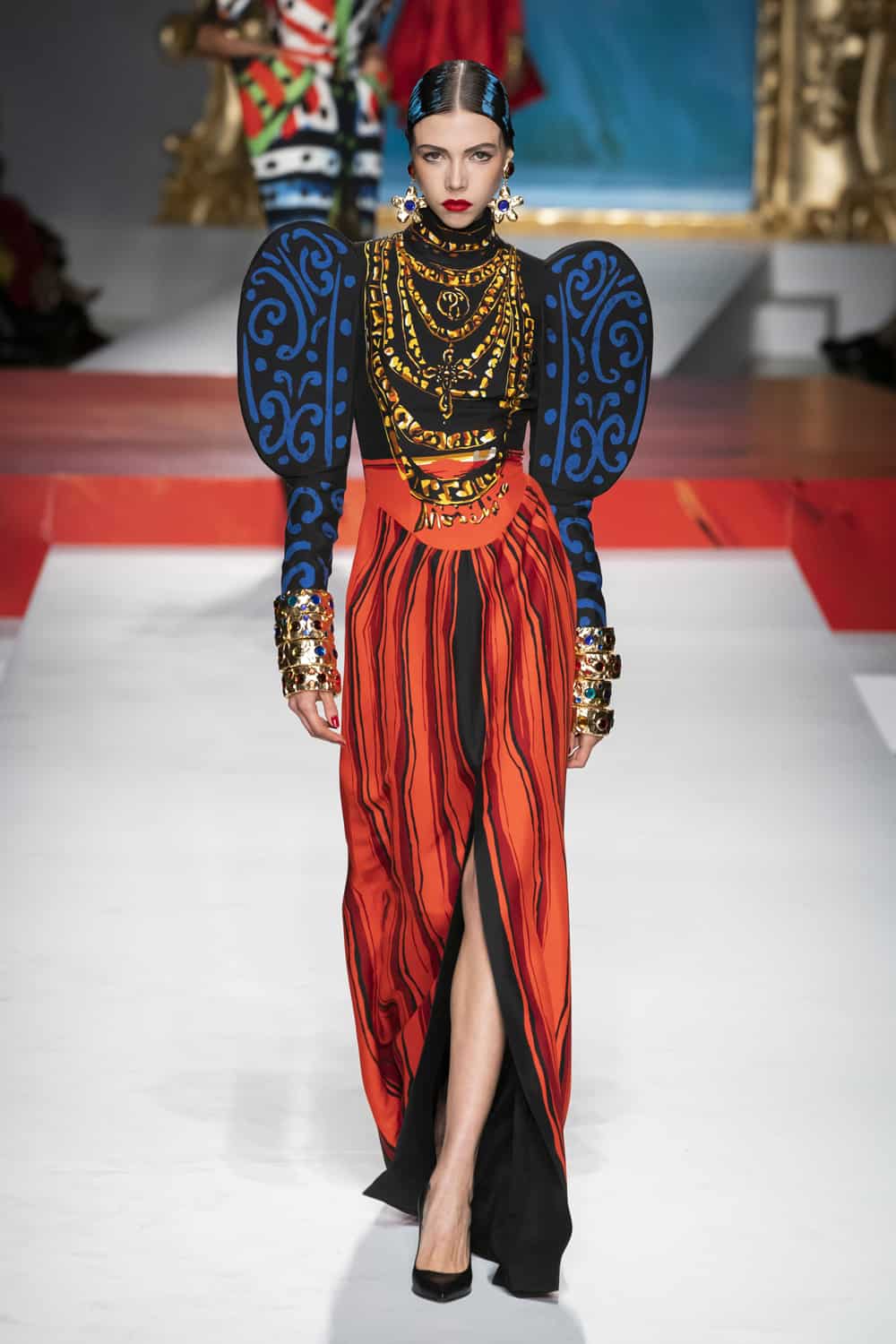 Did Picasso’s nods to his contemporaries resonate with you as a designer? Fashion seems even more interconnected than the art world…
Honestly, I think it’s the same. Especially in his time. He was also working with other artists, seeing what they were doing, and then being inspired to push further. Sometimes, it was his ambition and desire to be the best; his ego, frankly. And sometimes, it was just the fact that Matisse would debut a painting, Picasso would see it, and react to it. It’s kind of impossible not to react to something visually stunning, especially in your domain as a creative. And how that pushes the whole movement forward. That’s how there were different periods from Cubism.

He wasn’t the only one doing Cubism; he was part of a group. That, to me, is something that is actually more natural and more organic. I love him taking from another painter and doing a portrait. That inspired me to do clothes inspired by a painting. It’s just very post-post-modern! But I think that’s the way the visual world works. With audio, people create a new sound and that changes the way music moves forward, because people enjoy it and react to it. That’s a natural progression of how we are as people and as creatives. I think there’s too much emphasis now on people trying to point fingers about who did what first. Some of that information isn’t even accurate! 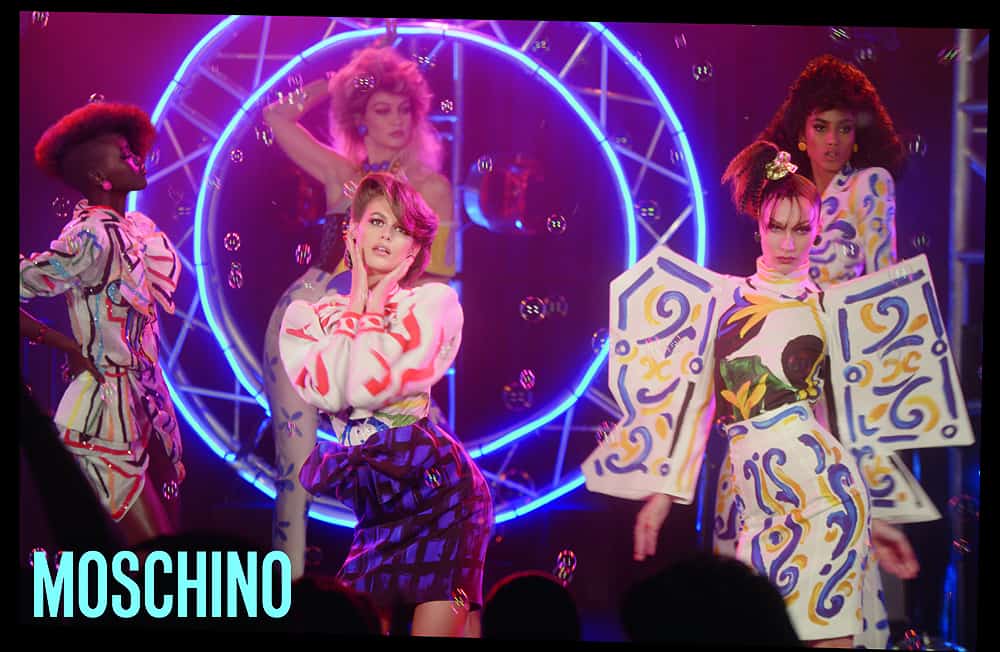 Very meta. What other artists are you fond of?
Millions! I love art. I’ve collaborated with the English duo Gilbert [Prousch] and George [Passmore]. I did a collection inspired by their work, with their work. They were so generous, and gave me so much to play with. I worked with Kenny Scharf, another artist I love — such a fun, inspiring multimedia artist. Also Rosson Crow, who has an exhibition at The Hole gallery in New York right now, and Aleksandra Mir, who I did my Fall 2019 show with, inspired by her re-drawings of the headlines of The New York Post and The Daily News. Obviously, [Andy] Warhol; I could go on and on about different artists who are inspiring. Art is such an important element of our culture. I’m a big proponent of art and art education, because it’s so enriching and helps people — especially kids — open their minds to new possibilities.

Why do you think there’s so much crossover between fashion and art?
Fashion is very visual, and we communicate daily through our clothes. Even if people don’t think they’re doing something dramatic or exciting, they’re still communicating. Whether that’s “I’m wearing this uniform because I work for this plumbing company, so trust me when I come to your house, I’m the plumber,” or someone like Lady Gaga communicates different moods through her clothes, like “I’m an alien space rock goddess” or “I’m a Hollywood starlet.” We use fashion all the time to give visual cues. It could be something as simple as our favorite band or a political message on a T-shirt, or even to communicate “I don’t really like clothes,’’ that’s still communication! It’s still a cue. 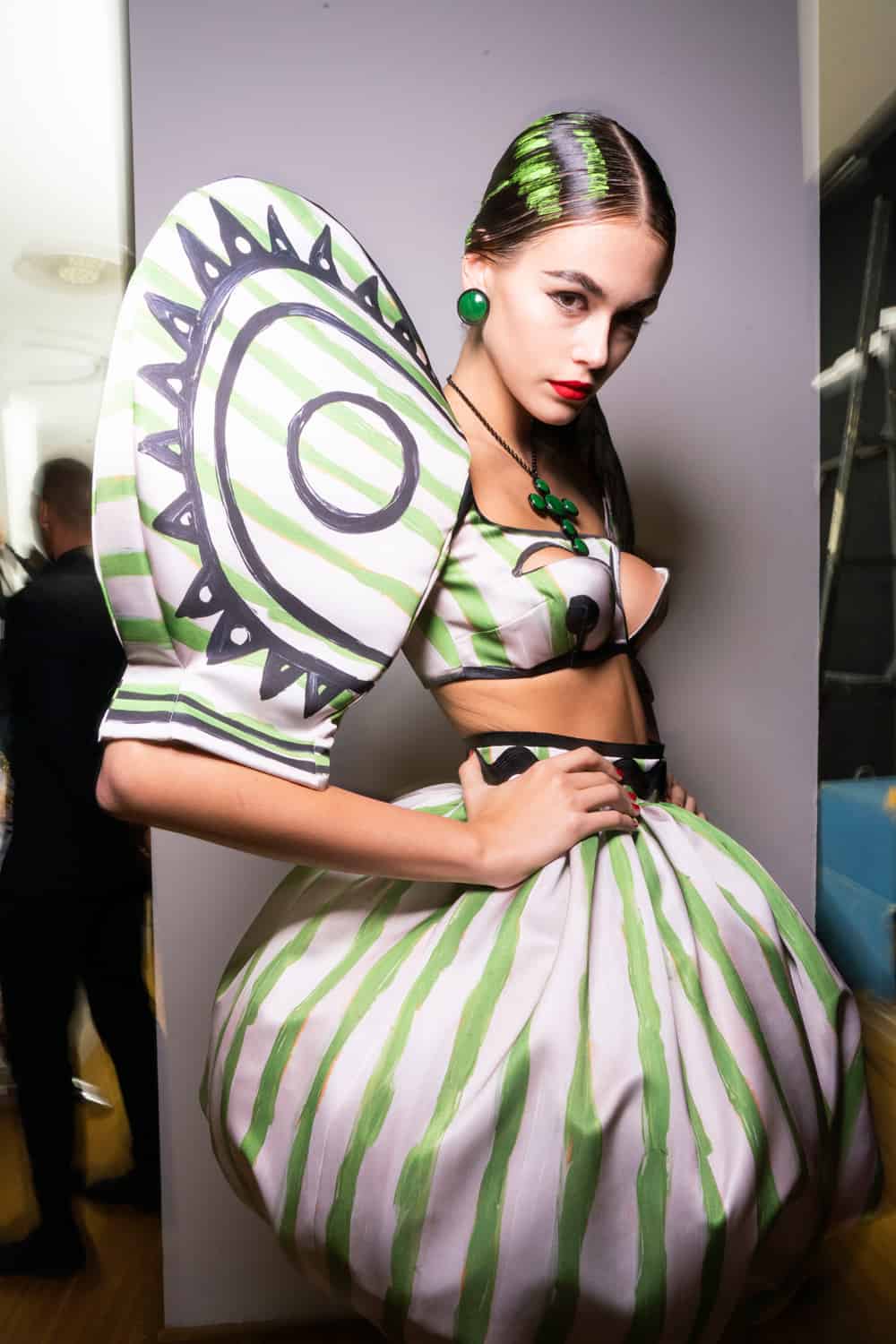 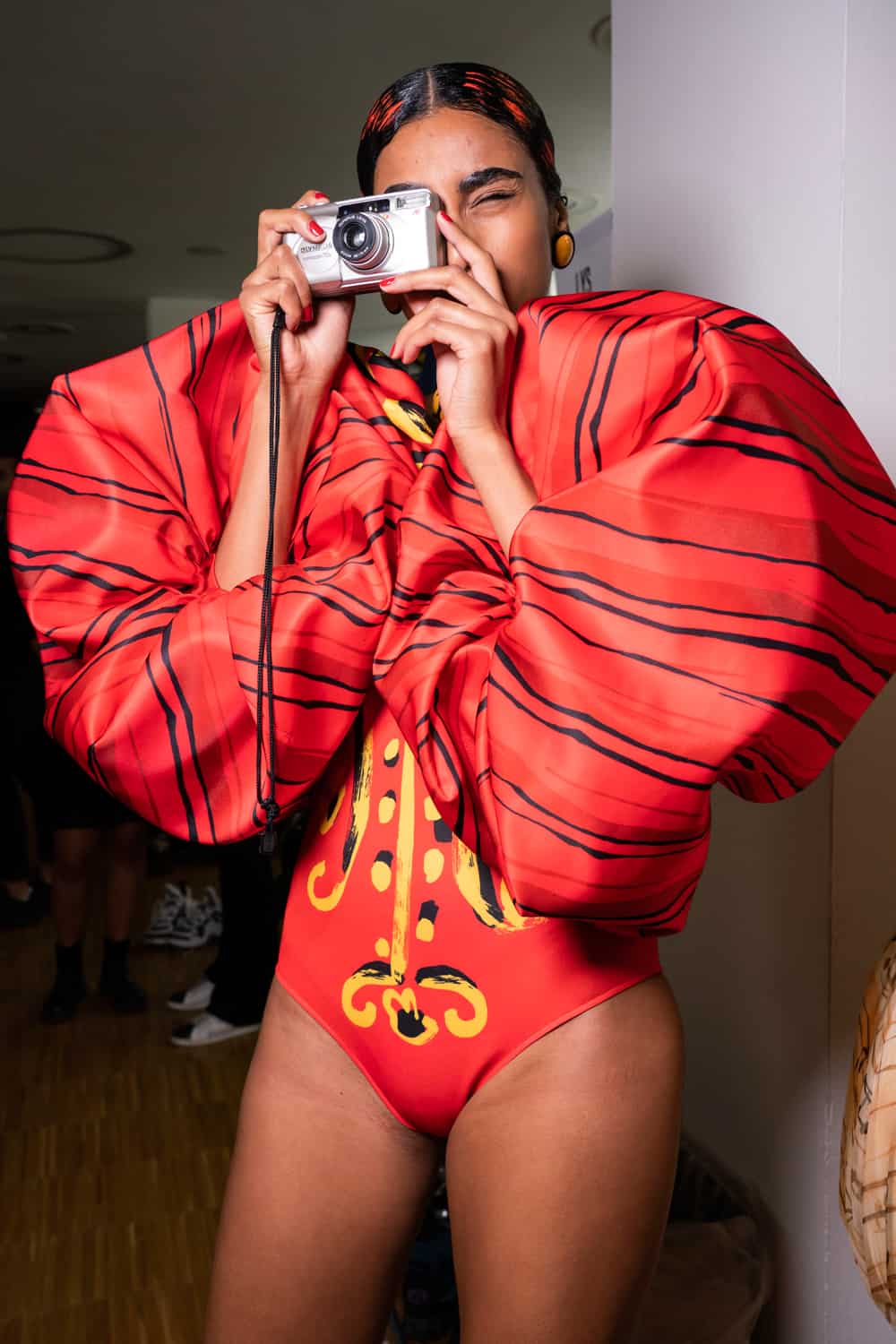 What does your own wardrobe say about you as a person?
It depends on what I’m doing, and how I feel. For me, clothes are really always about my mood. Obviously, the occasion can take part in that: Am I going to an awards ceremony? Am I going to the pharmacy? Am I just going to the office? For me, it’s always about a combination of those things, because you’re telling a story.

My clothes are constantly a big part of my personal expression. I wouldn’t do well with a uniform. Even one that’s self-imposed, like Steve Jobs. I really wouldn’t be able to do that, because my inner soul needs to be expressed, and sometimes that expression changes. Sometimes even in the same day! There are times I’ve changed clothes because I just need to feel differently. Maybe you put on a pair of high-heeled shoes, and it gives you an attitude. Or you pull on a pair of boots and you feel like you’re going to kick some ass. Clothes can enhance or alter your personality. That’s something I’ve very attuned to, maybe more than other people.

Looking ahead, what are your personal goals for 2020?
To take more vacations! Any place calm, relaxing, warm, with warm water. I’m happy for any kind of beach destination!