Jeffrey's Night At The Armory 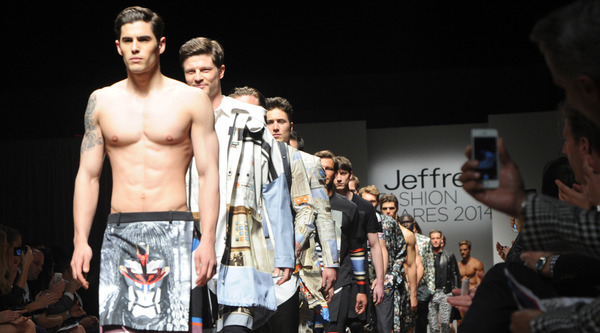 (NEW YORK) “It’s our Victoria’s Secret show!” a female guest mused last night at the 11th annual Jeffrey Cares fundraiser. Moving from last year’s stint at The Intrepid to The 69th Regiment Armory (home to the Victoria’s Secret show, as luck would have it!), Jeffrey Kalinsky‘s little event that could keeps getting bigger and bigger every year. This year, they stuck to the formula that’s been working: a lengthy cocktail hour,  an Anna Wintour cameo, a silent and live auction with contributions from the likes of Hearst and Calvin Klein, plus a performance by students from The Hetrick-Martin Institute. As for the main event? A fashion show filled with the hottest models in the biz today, many of whom were wearing very little. Anna Chlumsky took on hosting duties, Prada’s Christian Langbein and Bazaar‘s Michael Krans chaired the event, and Prabal Gurung, Mickey Boardman and Justin Tarquinio were host committee chairs of the eve. with proceeds from the event going to The Hetrick-Martin Institute, Lambda Legal, ACRIA, and The Point Foundation. Steve Madden presented Rob Smith with the Jeffrey Fashion Cares Community Leadership Award (Madden made a reference to The Wolf of Wall Street in the process).

Joseph Altuzarra, Constance Jablonski, Roopal Patel, Suno’s Erin Beatty, Nina Agdal, Jay Manuel, Steven Kolb, Ted Stafford, James Volpe, David Thielebeule, Jason Kanner, and Kate Bock were spotted spending their night caring with Jeffrey. “It’s a big night out with a fashion show that helps everyone!” Dennis Basso told us during the cocktail party. “It’s a little bit like a shopping mall with all these auction items.” Basso couldn’t name his personal favorite male model, but did share a piece of fashion trivia: “My cousin is the designer Jason Scarlatti for 2(X)ist.” Why haven’t we spotted Basso at a show?  “I’m backstage helping!” he quipped.

The event raised $669,811 for the charities, adding to over $11 million that Jeffrey Cares has raised over the past 22 years. Now that’s intensive care.