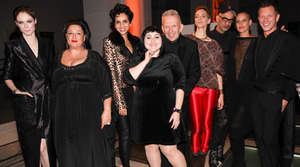 (New York) We knew Jean Paul Gaultier‘s exhibition was going to be good, but we had no idea it was going to be that good. How silly of us to forget that it’s Gaultier we’re talking about. Last night at the Brooklyn Museum the French designer opened the only East Coast exhibition of his greatest hits from the last four decades with The Fashion World Of Jean Paul Gaultier: From the Sidewalk to the Catwalk.

JPG was on hand to welcome friends and muses from around the world including Beth Ditto, Karlie Kloss, Coco Rocha, Calvin Klein, Alan Cumming, Sophie Theallet, Stefano Tonchi, Stella Ellis, Natalie Bondhi, Hannelore Knuts, Tanel Bedrossiantz, Amanda Lepore, Christian Siriano, Trish Wescoat Pound, Jesse Cole, and even Sally Jesse Raphael who was seated next to cowboy Randy Jones of the Village People (Bill Cunningham was on his toes last night!). Before the doors opened for the exhibition, the man of the hour graciously thanked his team and everyone who put the works in one place. “Honestly I never thought to make an exhibtion for a museum,” he explained. So why Brooklyn? “I feel a little bit at home. Brooklyn is more hip than Manhattan!” His words.

After he spoke, guests left the museum’s foyer where the cocktail hour was held to head upstairs to view the exhibition on the 5th floor. Highlights of the experience include 32 mannequins that come alive with interactive faces created by high-definition audiovisual projections (Trust us. It’s unbelievable!). Madonna fans will be in for a treat with the singer lending her iconic corsets from the 1990 Blond Ambiton Tour created by Gaultier as well as costumes from the Confessions tour and the MDNA tour. After a stroll through the exhibition, guests dined on pesto garnished cod and toasted fashion’s enfant terrible with Piper champagne. The party may or may not have carried on for a nightcap at the Boom Boom Room. The exhibition opens to the public tomorrow and runs through February 23rd. Run!

Sketching With The Whitney And Louis Vuitton